Eagles report cards after first half of season: Defense edition 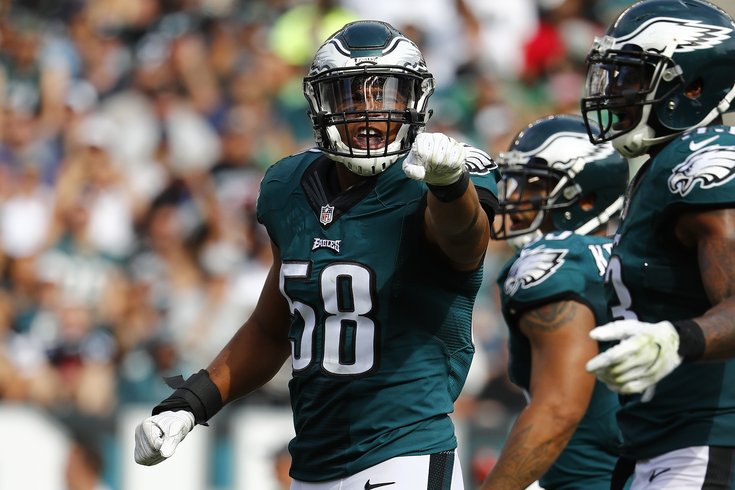 Jordan Hicks has made a lot of plays in the last four games.

The Philadelphia Eagles are a halfway through their first season under Doug Pederson, and are off to an up-and-down 4-4 start. Let's grade the Eagles' second-quarter performances individually, continuing on with the defense.

While Graham only has one sack in the last four games, he is averaging 2.25 hurries per game on the season. Only two players in the league are averaging more. They are Von Miller and Aaron Donald, who are pretty decent football players.

Cox was a disruptive force the first quarter of the season, winning NFC Defensive Player of the Month for September. However, his production has fallen off sharply. While he has made some plays in the run game, Cox's presence as a pass rusher has faded. We're maybe grading Cox more critically because of expectations, but the Eagles should be getting more from a player with a $100 million-plus contract.

Logan was one of the few players who showed up to play against the Redskins Week 6. That's the only game he played in the second quarter of the season, and clearly, his absence has been felt.

Barwin's production is up in the second quarter of the season from where it was in the first quarter. Throughout the Chip Kelly era, Barwin was one of the most valuable members on the defense because of his versatility. In a 3-4, he can cover, rush the passer, and set the edge, but is not a dominant player when doing any of those things.

In Schwartz's scheme, Barwin is being asked to beat left tackles mano-e-mano, which is not his strength. Schwartz needs his front four to be able to generate pressure on their own, without the benefit of blitzing, and Barwin has simply been invisible far too often during long stretches of games.He has also struggled against the run in Schwartz's attack-style defense.

Curry actually has 12 hurries on the season, which is tied for 20th in the NFL. That's a lot of hurries, considering the low number of snaps Curry plays. It's also a very surprising stat. On the eye test, Curry has not generated anywhere near as much pressure as you would hope from a player who just signed a five year, $46.25 million contract.

Smith actually had a sack against the Cowboys, and has not been a liability when he has gotten playing time.

Hot take alert: If you were to give all of Connor Barwin's snaps to Marcus Smith, there's a reasonable argument to be made that Smith would have been more productive over the first half of the season.

Allen has started for Bennie Logan over the last three games, and Logan's absence has been noticeable. Allen has not made any impact plays of note, and looked to be responsible for the blocked PAT against the Giants, as he allowed too much spacing between himself a Halapoulivaati Vaitai for Jason Pierre-Paul to shoot the gap.

Vaeao had a sack against the Giants, but he's typically losing his matchups when he's in the game.

Hicks was outstanding in coverage during the second quarter of the season, picking off two passes (both of which were huge plays) and deflecting five passes. He has also chipped in a sack, three tackles for loss, and 31 tackles over the last four games. Stud.

Bradham has had 38 tackles over the last four games, and like Hicks, has been good in coverage, with three pass breakups over that span. We'll dock Bradham a bit for a dumb unsportsmanlike conduct penalty and a lack of high-impact plays, but he's been a very solid addition to the defense.

Kendricks' first quarter of the season was a disaster. His snaps are way down as a result, but Kendricks has been better when he has gotten chances to play. In my view, Jim Schwartz has not been creative enough in finding ways to use Kendricks' positive attributes, such as blitzing the quarterback.

Has he even played in the second quarter of the season?

McKelvin has stated that his hamstring is not 100%, and thus he's not playing at his top speed. Still, if we're grading on performance, McKelvin has been very bad the last four weeks.

It's becoming clear that Carroll is the Eagles' best corner, which is less than ideal. Carroll is a competent No. 2 type of corner, but not a player you want covering star receivers, who the Eagles seem to face most weeks.

Brooks suffered a season-ending injury against the Redskins Week 6.

Mills is being misused, which isn't necessarily his fault, but he simply doesn't have enough speed to keep up with speedy receivers on the outside. Mills has a chance to be a good slot corner, but opposing offenses are going to look to exploit his lack of speed whenever they see him on an island against fast receivers.

On a side note, while I have an appreciation for swagger, the finger-wagging when a quarterback throws a ball 10 feet over an open receiver's head has to stop.

Jenkins is awesome. There aren't many players in the NFL who can transition as seamlessly from safety to slot corner and back to safety as Jenkins. His pick-six against the Redskins was a huge play that will be forgotten because of the way that game went, but Jenkins is an elite player. Where would this Eagles defense be without him?

McLeod has turned out to be a very good signing, as he leads the team in solo tackles (49) and interceptions (3).

While Watkins has looked confused at times (like when he and Leodis McKelvin collided, leading to a TD), his physical play has been encouraging. In the past, Watkins struggled mightily with his tackling, but he has been a solid tackler this season, and has even had a few nice hits.