Eagles reportedly brought in OG/C Stefen Wisniewski for a visit 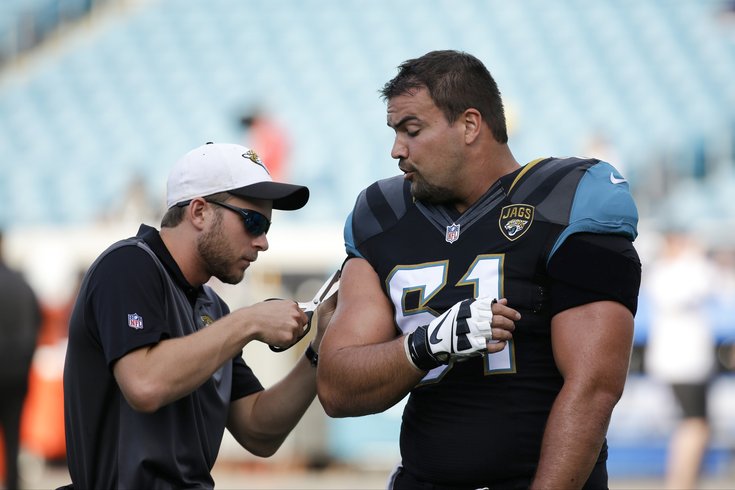 Stefen Wisniewski's contract demands reportedly include no longer being stabbed by scissors during pregame warm-ups. The Eagles are considering it.

According to Ian Rapoport of NFL Network, the Eagles brought in former Raiders and Jaguars offensive guard and center Stefen Wisniewski for a visit yesterday. Wisniewski also played in college at Penn State.

Offensive lineman Stefen Wisniewski, who recently visited the #Steelers, was with the #Eagles today, source said.

Wisniewski was a former second round pick of the Raiders in 2011. While his career to date has been something of a disappointment, Wisniewski does have 77 career starts under his belt, initially at LG before being moved to center. He just turned 27 in March, and has mostly played at center, which is by far the least strenuous spot along the offensive line. Therefore, he should have a plenty of years left in the tank.

When asked back in January what he values most in offensive linemen, Doug Pederson pointed to versatility.

"You love offensive linemen that are versatile," explained Pederson. "You love to have tackles that can play left or right. You love to have guards that can also play center. The more you can have that flexibility with your guys up front, the more combinations and rotations you can have, because not everyone is going to stay healthy for 16 games and you have to mix and match that."

The Eagles added RG Brandon Brooks earlier in free agency, but can use more depth across the board along their offensive line. Wisniewski would give Philly a guy who could compete for the starting LG spot, as well as provide depth for Jason Kelce at center. With David Molk having retired this offseason, the Eagles will need to have a backup center in place. At a minimum, Wisniewski would provide that, and would be an upgrade over the Eagles' 2015 LG, Allen Barbre, if the Eagles failed to find an immediate starter at guard in the draft.