The latest NFL trade rumors have Howie Roseman selling rather than buying... 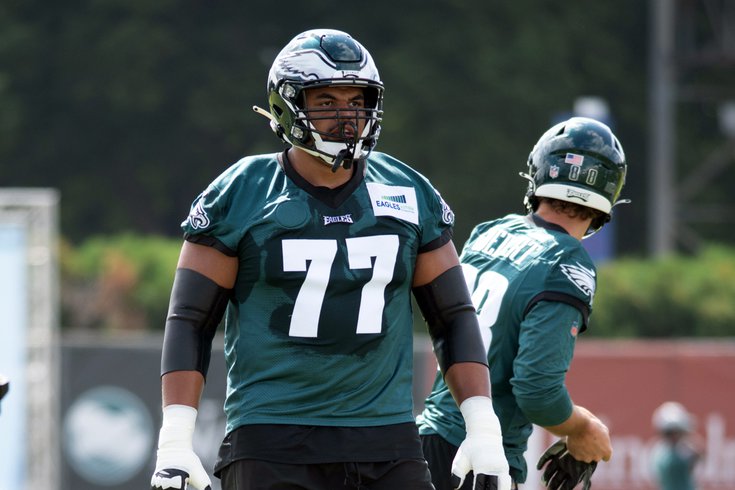 When trying to project the Philadelphia Eagles' final 53-man roster over the weekend, we landed on excessive numbers along the offensive line and at linebacker.

We had the Eagles keeping 10 offensive linemen (11 if you count Landon Dickerson on the PUP list), and seven linebackers. That forced us to go thin at other spots, notably at cornerback and along the defensive line.

And so, it comes as no surprise that the Eagles were seemingly willing to tell SI's Albert Breer that they're listening to offers on their offensive line and linebacker depth, as Breer included the following nugget in his MMQB piece Monday morning:

The Eagles are another team taking calls on offensive linemen—their issues of the last few years staying healthy up front have actually created a situation where they have experienced backups. Philly’s also discussed dealing away some linebacker depth.

That makes sense. A look at some players the Eagles could be willing to deal.

• Andre Dillard: The Eagles don't have much use for Dillard, since (a) they have a much better starting LT in Jordan Mailata, (b) Dillard can't play any positions other than LT, and (c) the Eagles have other players who are capable backups at LT. After an awful start to his career and a bad 2021 training camp, a new start for Dillard in a different city would be best for all parties involved. Perhaps someone will like his athleticism and think they can mold him into the lineman the Eagles thought they were getting when they took him in the first round of the 2019 NFL Draft.

• Sua Opeta: Other teams have attempted to poach Opeta off of the Eagles practice squad in the past, and when I took a look at all of his snaps in 2020, I came away pleasantly surprised by what I saw out of him.

• Le'Raven Clark: The Eagles signed Clark in May, after he had torn his Achilles in December. Clark returned to action perhaps sooner than expected, and put some concerns to bed about lingering issues from his injury during the final preseason game.

• Matt Pryor: I'm not sure why anyone would give anything up for Pryor, but if some team likes him for some reason, the Eagles would no doubt be happy to deal.

• T.J. Edwards: Edwards is an instinctive linebacker who specializes in stopping the run, a role he filled well as the third linebacker in Jim Schwartz's scheme. In Jonathan Gannon's scheme, he's a little more of a difficult fit, as the two starting off-ball linebackers are tasked with being three-down linebackers, and the SAM linebacker is expected to have pass rushing traits. Edwards is a good role player, but he probably doesn't fit into this defensive scheme as positively as he would in others.

• Shaun Bradley: Bradley played the second-most special teams on the roster last season, and like Edwards, his best trait is his run-stopping ability. He's a bit of a projection as a three-down linebacker, and does not possess the aforementioned pass rushing traits.