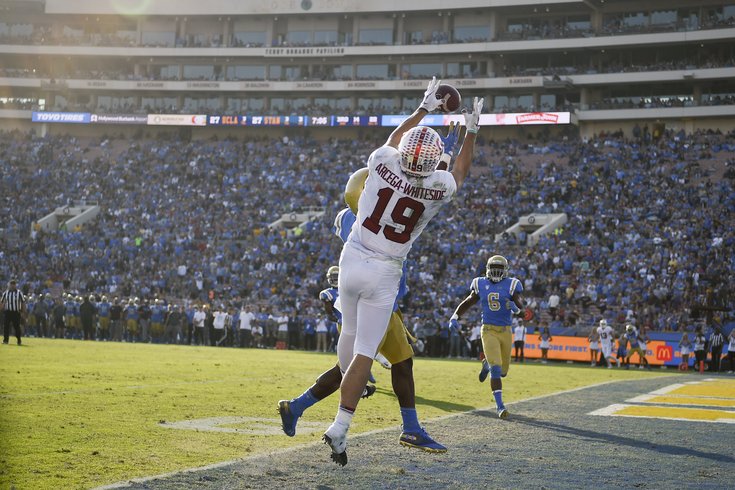 J.J. Arcega-Whiteside reminds me a lot of Dez Bryant. Well, on the the field, anyway.

During this dead period of the offseason, we'll be comparing each of the Eagles' rookies to current NFL players. Previously, we started with first-round pick Andre Dillard and second-round running back Miles Sanders. Today we'll find a comp for second-round wide receiver J.J. Arcega-Whiteside.

First, who did Arcega-Whiteside pattern his game after?

"There are a lot of players I looked at," Arcega-Whiteside said. "Alshon (Jeffery). I looked at Mike Thomas, Steve Smith, a little bit of everybody, because I don't want to try to be one guy. I want to try to (implement) what everybody does well and put that in my game so that I can become a complete player.

"(Smith) was a local guy. He's one of the biggest competitors to ever play football. When I was at a football camp in North Carolina, he came out and gave me a lot of advice and tips. I was already a fan before that, but he became my favorite then. We just keep interacting. Even in college he would call me from time to time. During the Combine, we did an interview. He's just always been there. He's been a reliable source for me.

"(Thomas) is just a great football player. He works hard. He's not the fastest guy, the strongest guy, but he goes out there and makes plays. He's smooth, and at the end of the day, that's what you have to do to be a receiver, is run routes, catch balls, make plays."

Who does Arcega-Whiteside remind me of?

When Arcega-Whiteside was drafted, many (self included) made the obvious comparison to Alshon Jeffery, because of both players' abilities to win on contested catches. That's too easy though.

After giving this one a lot of thought, I've settled on the guy he reminds me of most, and it may come as a bit of a surprise. Dez Bryant!

They also had identical heights and weights coming out of college, as well as similar athleticism measurables:

To be clear, we are not predicting the same type of career for Arcega-Whiteside that Bryant had. There were three years from 2012 to 2014 in which Bryant was a top five receiver in the NFL. During that span, he racked up 273 catches for 3,935 yards and 41 TDs. That was an average of 91 catches, 1,312 yards, and 14 TDs per season.

In his prime, Bryant was more explosive, and had more ability to make plays after the catch. But they do have common traits, most notably the ability to win contested catches (especially in the red zone), awareness and comfort on back shoulder throws, and boxing out corners like a rebounder on slant routes.

In the same way that tandems like Tony Romo and Bryant, as well as Aaron Rodgers and Jordy Nelson, mastered back shoulder timing throws, Carson Wentz and Arcega-Whiteside should make a conscious effort to do the same.