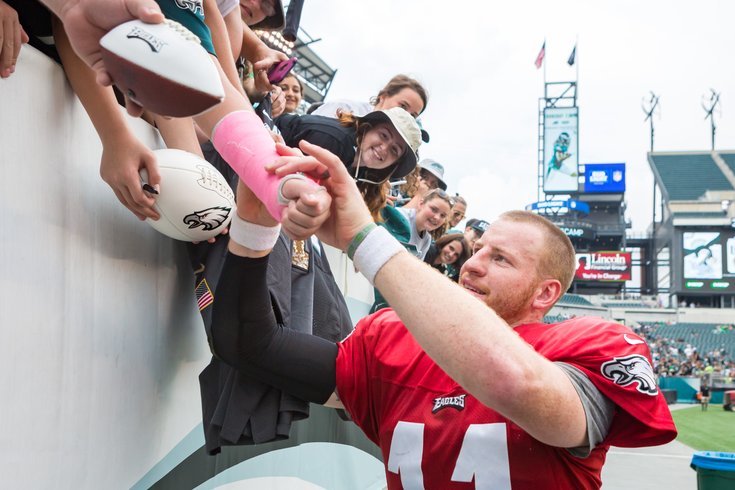 Change is never easy. Unfortunately, the Eagles have decided to change the way they do training camp for fans and will now be charging $10 per ticket to benefit the Eagles Autism Challenge.

Despite the well-intended charity angle, this move was poorly thought out and while $10 (plus $2 in fees taken in by Ticketmaster) does not feel steep to some, a family of four who probably used the free training camp practices as a highlight of their summer activities will be the ones who suffer. And that's a real shame.

Adding insult to injury, the team didn't give any sort of advanced notice, putting the tickets on sale minutes before they were even announced to the public. Which means countless Birds fans will come home from work Tuesday scratching their heads having missed out on the opportunity.

Sure, the Eagles are claiming that the practice will have additional activities like alumni autographs, face painting and more. But this doesn’t make up for the fact that at one point there were 18 days of free camp at Lehigh University that has been whittled down to one practice that you now have to pay for, even if parking is free.

Perhaps the Eagles should have considered charging for adults 18 and over and allowing kids in for free. Eagles games, in general, are not exactly family friendly, especially compared to some of the other teams' games.

Summers at Lehigh were a time when fans of all ages felt they had access to the team, where they could gear up for the upcoming season. Gone now completely are the days of young Eagles fans feeling the excitement of who they might meet while at camp.

There is nothing wrong with a charitable donation, but this was poorly executed. There has to be a happy medium to keep the fans on board.

Another basketball offseason, another summer in which we are subjected to LaVar Ball in the media.

After his son, Lonzo, was traded from the Lakers to the New Orleans Pelicans in the Anthony Davis deal, LaVar was invited on ESPN’s “First Take” to incoherently ramble on into space about the move. I’m not even going to fan the flame on his commentary — commentary that the NBA doesn’t and has never cared about. Instead, I’m going to ask that ESPN and other media outlets simply stop giving this man the public platform to embarrass his children by treating actual media professionals like garbage.

During his rant on the show, co-host Molly Qerim tried to attempt to get an actual answer from Ball by interjecting that they “switch gears." Ball replied, “You can switch gears with me anytime.”

Qerim has been lauded for how she handled this degrading remark, but the truth is this: Ball has now shown that he is completely incapable of showing any level of professionalism by being unable to restrain himself and not be a complete creep on a public platform.

This is no longer about click bait headlines. This is no longer about digital ratings. ESPN should recognize that it is up to them to protect their best talent from being subjected to this type of behavior by not allowing him on any of their programs. That way, he'd never even be in a position to demean their hosts.

ESPN has released a statement saying "LaVar Ball’s comment to Molly Qerim Rose was completely inappropriate and we made him aware of that."

That statement isn’t good enough. Making him aware will only suffice if he actually learns something from his mistake. And the only way to make him learn might be by taking the one thing he loves most in this world away from him.

No, not his children.

The only way to get through to him may be by sending him into obscurity — and he’s done nothing to warrant the polite approach.