10-7? 11-6? NFC East champs? A look at Eagles schedule predictions from around the area 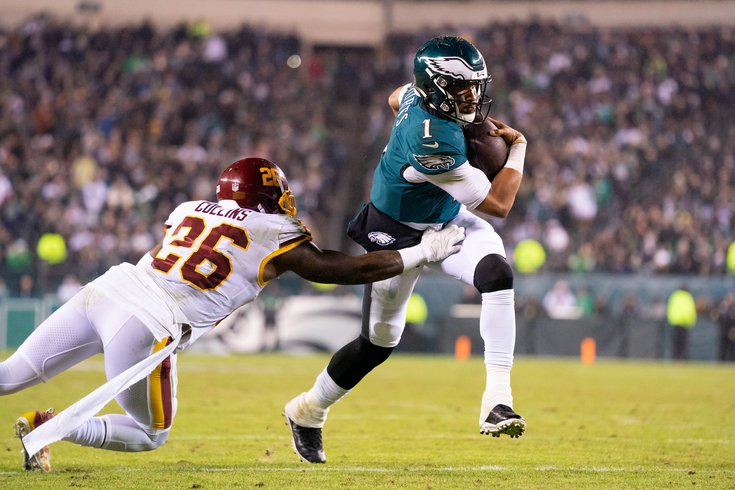 The Eagles' schedule released Thursday night, and because the season won't start for another four months, there isn't much else to talk about aside from trying to predict how things might go.

Nearly every football writer in the area did just that.

"Is it a semi-pointless exercise to predict each regular season game's outcome as early as May, a day after the schedule was released? Yes, yes it is," our own Jimmy Kempski wrote. "Because I'm a hack sellout, let's just go ahead and do it anyway."

He has the Eagles going 10-7, nabbing a wild card spot but losing to the defending champion Rams in the early playoff round.

Other writers' predictions don't stray too far away from that same idea. Let's take a look.

Jimmy's BGN Radio co-host also has the Eagles in the playoffs. They'll take care of the bad/suspect teams and struggle against the good ones.

"The Eagles have one of the easiest schedules in the league this based on 2022 projected win totals. If there’s anything we learned from last year, it’s that they’re pretty good at taking care of business when it comes to the bad/mediocre teams. But they really struggled against the legitimately good ones." [Bleeding Green Nation]

Would also like to point out both of their takes on the Week 15 matchup at Chicago.

Franklin has the Eagles jumping out of the gate early to an 8-1 start. They'll falter a bit down the stretch but will have the division in hand by the final two weeks of the season.

"The Eagles’ early start immediately puts pressure on the other teams in the NFC East. The Eagles wind up winning the division for the first time since the 2019 season and the first time under Sirianni. The Eagles would get a home game and have a legitimate chance to get a win in the first round." [NJ.com]

The Athletic's Eagles writers both have the team back in the postseason, but with slightly different routes of getting there. Wulf's estimate is the Week 18 finale against the Giants will be a rest game. Berman thinks the Eagles will need their starters in the final week to keep their season going.

Both believe the Week 17 matchup against New Orleans will be key.

Berman: "The Eagles need a win to help their postseason push — and to enhance the 2023 draft pick they’re owed from the Saints. They get both in this game. Reddick reaches a career high with his 13th sack. Win (9-7)" [The Athletic]

Wulf: "The well-lubed New Year’s crowd at the LINC is fired up for a game with significant implications. A win not only clinches a playoff spot for the Eagles but also a top-10 selection for the 2023 draft pick acquired from the Saints. Chris Olave catches eight passes for 23 yards and Andy Dalton is intercepted by Tay Gowan. The Eagles roll 35-9. Win (11-5)" [The Athletic]

The Inquirer beats see the Eagles finishing 1-2 wins better than last season, at least putting them back in the playoff picture for head coach Nick Sirianni's second season.

McLane: "Training camp and the preseason should allow for better takes when we do this again in three and a half months. But a 10-7 record — one win more than last season — sounds about right with the Eagles’ schedule one of the easiest based upon 2021." [The Inquirer]

Todd Archer, ESPN: Eagles will get a top pick from the Saints.

So Archer didn't so much make a record prediction as he did a big-picture prediction.

He goes over the Eagles' advantageous strength of schedule, which has them set up to go on a quick start, and that they're probable to surpass the oddsmakers' projected win total at 9.

But if Jalen Hurts fails to take a step forward and the Saints fall flat, that pre-draft pick swapping trade will give the Eagles all they need to upgrade.