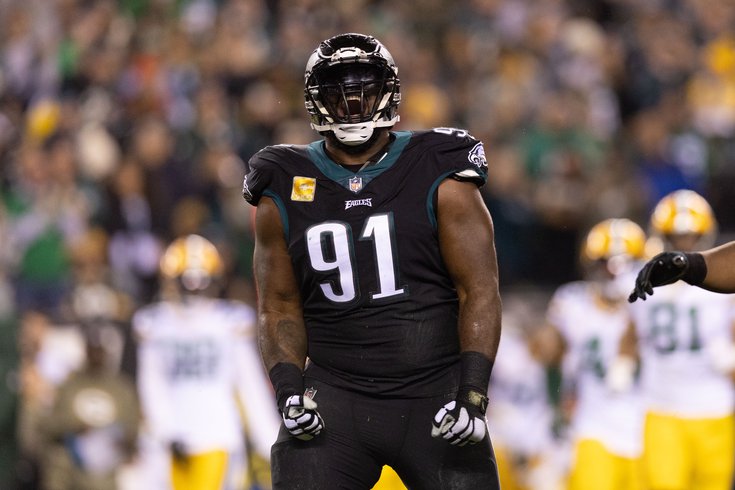 Fletcher Cox only had to play 31 snaps on Sunday night.

In their Week 12 win over the Green Bay Packers, the Philadelphia Eagles played 80 snaps on offense, and 49 on defense. Let's just get right to the snap counts, and some notes.

Analysis: Hurts should be in the top three in the MVP race, along with Patrick Mahomes (Chiefs) and Tua Tagovailoa (Dolphins). He is completing 67.3 percent of his passes, with a 17:3 TD:INT ratio, 8.1 yards per pass attempt, a 105.6 QB rating, and he has run for 597 yards and 8 TDs. Is that a good résumé? It seems good.

Analysis: The running back rushing numbers:

The offensive line opened up gaping holes in the run game, but I also thought that the Eagles' backs broke a lot more tackles in this game than we are used to seeing. This was the backs' best performance of the season, by far.

Analysis: On a night in which the Eagles' rushing attack was breaking records, the receivers did not have eye-popping stats, but they made enough plays to be effective.

Brown lost a fumble, just like he did a week ago in Indianapolis. The last time he fumbled before that was 2020. Still, it's a problem now and opposing defenses will gameplan to try to rip the ball away from him when he fights for extra yardage.

Watkins has stepped up into a bigger role with Dallas Goedert out. He is now the No. 3 in the pass game, and he has delivered splash plays in each of the last two games. The Eagles have to be encouraged by his performances the last two weeks after (a) having a diminished role for most of this season, and (b) fumbling against the Commanders Week 10.

The Eagles played a whole lot of 11 personnel, with Brown, Smith, and Watkins each playing at least 82 percent of the snaps. They even showed some occasional four-wide looks, which made sense against a banged-up Packers secondary.

Analysis: The Eagles rightfully moved away from their two tight end sets with Goedert out. Calcaterra and Jackson filled in on occasion for Stoll, but there were only a handful of snaps in which the Eagles fielded multiple tight ends.

Analysis: The offensive line dominated in the run game, as they often do. Collectively and individually this is just such a special group.

Analysis: Cox and Hargrave have been playing way more than the Eagles would like, so I'm sure that the defensive staff was thrilled to have gotten through this game with each player only getting 31 snaps. Cox had his first sack since Week 3. Sweat also had a sack, while Graham and Haason Reddick split a sack.

The Eagles could have reinforcements on the way, with Jordan Davis eligible to come off of injured reserve this week. He was running through the tunnel after the game, which is a good sign.

Analysis: I thought White made a huge under-the-radar play in this game. Facing a 3rd and 5 with 3:01 left to play in the first half, the Packers were able to create a mismatch against White, getting him lined up in coverage against Randall Cobb, who was in the backfield pre-snap. This isn't a great view as the TV feed cuts it off, but White locked down Cobb long enough for Fletcher Cox to get home for a sack, forcing a punt.

The Eagles' offense then went 71 yards on nine plays the other way for a huge score just before the half.

Analysis: When Blankenship got two snaps last week in the Eagles' win over Indy last week, that signaled that he had overtaken Wallace as the No. 3 safety. And sure enough, when Gardner-Johnson left with a rib injury, in came Blankenship. I look forward to breaking down Blankenship's night when the all-22 is made available.