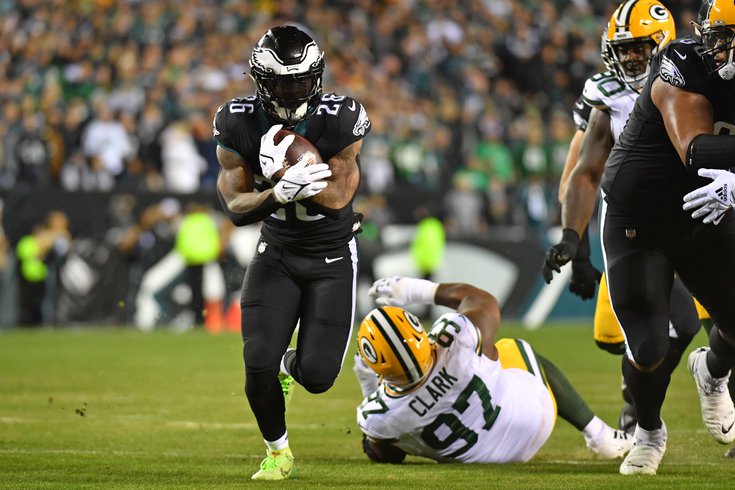 The Eagles ran for miles against the Packers.

After a few sluggish performances, the Philadelphia Eagles exploded for 40 points against the Green Bay Packers in front of a national audience on Sunday Night Football. As always, win, lose, or tie, we had out 10 awards.

Jalen Hurts ran it 17 times for 157 yards, while Miles Sanders carried 21 times for 143 yards and 2 TDs. The Packers didn't seem to have ever watched any Jalen Hurts game film, because when he tucked and ran, he often found wide open spaces through the non-existent Green Bay defense. When the Eagles called traditional runs with Sanders, Boston Scott, or Kenny Gainwell, the offensive line was consistently opening up gaping holes through the first two levels of the defense.

When asked why he had a lot of rushing yards, Hurts explained, "I ran and they couldn't get me."

I'll have to check the all-22 to see if that checks out, but it sounds about right.

As a passer, Hurts was efficient, connecting on 16 of 28 pass attempts for 153 yards, 2 TDs, and 0 INTs. There have been some quarterbacks who have had monster rushing performances, but didn't also do damage through the air. Hurts did both.

Jalen Hurts is the first player since at least 1950 with 150+ rush yards, 150+ pass yards & multiple pass touchdowns in a the same game.#FlyEaglesFly @Eagles

The Eagles' offense is very difficult to stop, as they can win in a variety of ways. Hurts makes that possible because he has become such a dual threat. He is a very worthy MVP candidate three months into the 2022 season.

Sanders' aforementioned 143 rushing yards were good for a new career high, besting his Week 4 performance against the Jacksonville Jaguars, when he ran for 134 yards.

Eagles with 248 yards on the ground

Sanders probably also broke more tackles in this game than he has in any game in his four NFL seasons. He was explosive, and he also ran with some power.

The Dolphins aside, the Eagles' big three of A.J. Brown, DeVonta Smith, and Dallas Goedert is as formidable a trio of pass catchers as you'll find in the NFL. As such, Watkins' role this season has been diminished, at least in comparison to last year, but he has stepped up in Goedert's absence as the No. 3 guy in the passing game.

"Obviously Quez is a big-time playmaker that wants to make plays," Nick Sirianni said earlier this week. "Just because Quez may not be stuffing the stat sheet, the last couple games have been good as far as his stats, but he still affects the game because of the speed that he has and the big play ability that he brings to this team. So that was on display, I think, against Minnesota where he had the big game and the catches.

"I can trace back to the meeting of when we talked to everybody about their role. Where I stood right there, I looked at every guy in here individually in front of their teammates, I talked to them each individually while everybody was in here and basically spelled out their role. Quez's role was to be able to make timely plays just like he did last year. He had more opportunities when we needed him. Quez had a really good ability of making big plays last year when we needed him, and they were usually explosive ones.

"Now, how does that message change at the end? The message always at the end of that role talk is now hey, listen, guys, this is a long season, and things happen in this season, and there's going to be naturally bumps and bruises throughout the season. So your role can change like that [snapping fingers], and it does."

Watkins made the best of his opportunities Sunday night, making 3 catches for 35 yards and a huge TD just before the end of the first half.

Over the last four games, Watkins has caught 11 of his 13 targets, and he has TDs in consecutive games. If he can become a big play threat, it's just one more player opposing defenses have to sweat in an already loaded offense.

Throughout his career, A.J. Brown had moments of excellence, and moments of inconsistency. Through the first half of the Eagles' season, Philadelphians only saw the excellence. More recently, some inconsistency has creeped into Brown's play a bit. He has lost fumbles in consecutive games, and he also had a drop on Sunday night.

Gardner-Johnson, the NFL's interceptions leader, was carted off with a rib injury, and he was in a whole lot of pain.

Chauncey Gardner-Johnson getting carted inside. Clearly in a lot of pain. pic.twitter.com/VuOt9raXiW

Safety is a rare position where the Eagles seemingly did not have a lot of depth, so if Gardner-Johnson is out for a while, that will be a difficult injury to overcome. We'll find out this week if CJGJ will join Goedert, Avonte Maddox, Jordan Davis, and others on injured reserve.

If you read our snap count articles each weeks, you may have been clued in that Blankenship was likely the Eagles' new No. 3 safety, jumping K'Von Wallace on the totem pole. When he replaced Gardner-Johnson, he more than held his own. Blankenship was a physical tackler, and he made an exceptional play when he intercepted Aaron Rodgers.

Reed Blankenship off the bench tonight:

Blankenship trusted his instincts and attacked, which is something you don't often see of an undrafted rookie free agent seeing his first real snaps in a regular season game.

8) The 'Ice Water in the Veins' Award ❄️: Jake Elliott

Elliott missed a PAT in this game (not great), but he made a huge 54-yard kick when it really mattered. Add another one to the pile of clutch monster kicks that Elliott has made for the Eagles over his career.

After picking him off twice and sacking him thrice, the Eagles forced Rodgers to exit Lincoln Financial Field and call it a night. To be determined if Rodgers will continue to play for the now 4-8 Packers this season, or if he'll give way to Jordan Love, brew up a special cup of tea, curl up by the fire with an Ayn Rand book, and have Cris Collinsworth stand in the corner ready to dish out fawning compliments on command.

The Eagles didn't gain ground on the two teams closest to them in the NFC standings, as the Cowboys and Vikings each won on Thanksgiving. BUT... They narrowed the opportunity for those two teams to catch them by putting another W on the board.

Next Sunday, the Eagles should be in a tough dog fight against a grimy opponent in the Tennessee Titans.