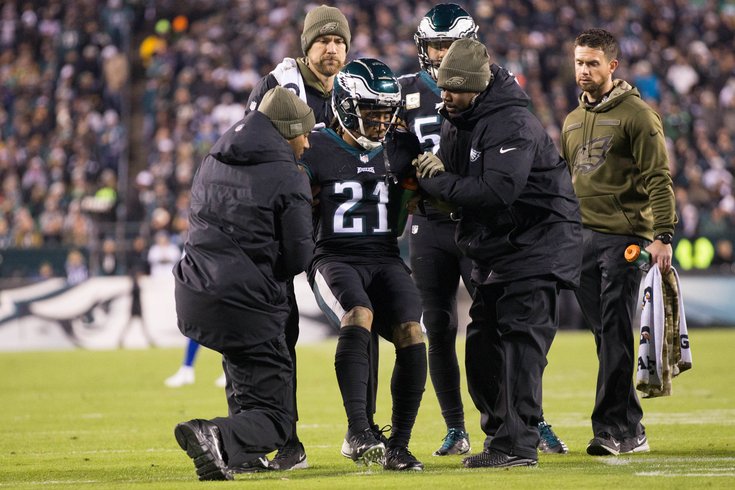 Ronald Darby could be in line for a decent pay day, even coming off an ACL tear.

Today we'll look at the cornerbacks.

Mills had some early struggles, particularly Week 2 against the Buccaneers, but he played better before injuring his foot in London against the Jaguars and going on IR. While Mills certainly has his flaws, such as his deep coverage ability, he is a very good red zone corner, and an excellent tackler.

He is a Jim Schwartz favorite, and isn't going anywhere. Expect Mills to start once again in 2019.

Darby will be a free agent this offseason, and his value on the open market will be unpredictable. On the one hand, he just turned 25 in January, he has good coverage skills, and he's probably the most athletically gifted of the Eagles' corners. On the other hand, he doesn't exactly embrace the art of tackling, and he tore his ACL in November.

Interestingly, Evan Silva of Rotoworld listed Darby as the top free agent corner on the market. Obviously, it's not a very strong cornerback group this offseason. As a result, the chances that Darby gets a decent pay day are increased, which frankly, is good for the Eagles, as the more Darby gets paid, the higher the Eagles' return on a potential 2020 compensatory pick will be.

Seeing as the Eagles got strong corner play from Rasul Douglas, Avonte Maddox, and Cre'Von LeBlanc down the stretch — and they'll be getting Mills and Sidney Jones back next season — they should being feeling reasonably good about their corner depth, and likely won't put up a big fight to keep Darby.

After playing in just one meaningless game in 2017, Jones entered the 2018 season as the starting slot corner. Early in the season, he showed flashes of the player the Eagles thought they selected in the second round of the 2017 NFL Draft. However, Jones battled through a hamstring injury, and was obviously still hurt when he was picked on by the Cowboys and Saints, before being sidelined the rest of the season.

The Eagles invested a second round pick and the entirety of Jones' rookie season while he healed from ruptured Achilles suffered prior to the draft. They are a long way from giving up him. In 2019, Jones will have a chance once again to carve out a role in the Eagles' defense, but he'll have to prove he can stay healthy, which is now a legitimate concern.

Douglas entered the season as the fourth corner, and got a chance to start after the Eagles lost Mills, Darby, and Jones. In his first few starts, Douglas was shaky, but he turned it on late it the season, and made a case that he should be able to at least compete for a starting job next offseason.

Douglas isn't the fastest corner, but he has good ball skills and is a good tackler. The Eagles have to be pleased with the way he grew as a player in 2018.

Maddox played slot corner, safety, and outside corner for the Eagles as a rookie in 2018, and did so impressively and confidently. He looks like he may have been a steal in the fourth round of the 2018 NFL Draft, and could compete for a starting job at any number of positions. His versatility will enable the Eagles to have all different kinds of options in the secondary, which makes him a potentially very valuable piece for the foreseeable future.

LeBlanc was an outstanding in-season addition who "really solidified the nickel spot," according to Schwartz. He's a good tackler, he's quick, and most importantly to Schwartz, he's confident. He's going to be back on the team in 2019.

He played in the Eagles' playoff game against the Saints, and he's under contract in 2019. Beyond that, I don't know what else to say.