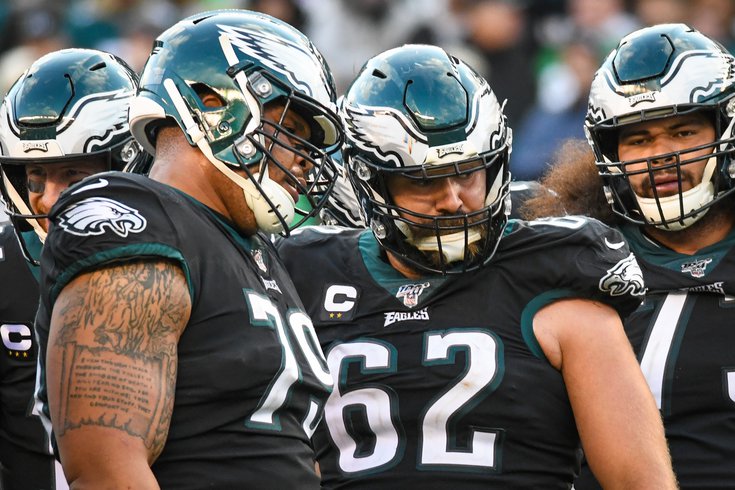 The interior of the Philadelphia Eagles' offensive line during the Doug Pederson era featured the league's best center in Jason Kelce, and one of the NFL's best guards in Brandon Brooks. Going forward, the Eagles' O-line interior has plenty of question marks, first and foremost being whether Kelce will return or retire. Here we'll look at who stays, and who goes.

I don't know if Kelce is going to retire this offseason or not, and I'm not sure anyone else does either, Kelce included. Personally, I don't know what would be in it for Kelce to play in Philadelphia for one more year, given that Jeffrey Lurie all but said 2021 would be a rebuilding year. However, if Kelce did decide to play another year, I do wonder what the Eagles could get in a trade from a contender in need of a center.

The Eagles have a hefty tab to pay on Kelce's contract. If they traded him before June 1, they would have a dead money hit of $10,142,000, and it would actually cost more to trade him than keep him. That probably can't happen.

Seumalo isn't a guy who is going to steamroll defensive tackles in the run game, and he'll give up a sack here and there, but he has become a competent NFL starter at LG.

His real value to the Eagles, however, is his versatility. The team has been cross-training Seumalo for years at guard and center, and he gives the Eagles options whenever Kelce retires.

As you're all aware, Brooks ruptured his Achilles during the summer and missed the entire 2020 season. It was his third major injury in an 18-month span:

Brooks was able to return from his first torn Achilles in time for the start of the 2019 regular season, an extremely impressive feat for a 340-pound man. He has also stayed in shape, and then some, since his injury. I mean:

In addition to overcoming major injuries and playing at a high level, Brooks has also heroically battled anxiety and become one of the team leaders in the locker room. So if there's someone who can overcome a second ruptured Achilles, it's him.

#JimmyVerdict: Brooks' now extensive injury history has to be a major concern going forward, from a roster-building perspective. There's very little the Eagles can do with him in 2021, but the team will have options in 2022 and beyond. For now, he's not going anywhere. Stay.

Herbig played LG, RG, and has worked out at center. He's not an ideal starter by any stretch, but he at showed that he can capably fill in at multiple interior O-line spots, if necessary.

Pryor had a weird year in 2020. Let's recap his Eagles timeline:

2) During the 2020 offseason, Brandon Brooks got hurt, and most penciled in Pryor as the new starter at RG, barring a roster addition.

4) LT Andre Dillard injured his biceps and his season was over. Jason Peters subsequently refused to move to LT to replace Dillard without a bump in pay. In the meantime, Pryor got the first crack at playing LT with the first team offense in practice.

5) In a scrimmage setting during training camp at Lincoln Financial Field, Pryor got absolutely wrecked all day by Josh Sweat. It was essentially the “Winston Justice game” equivalent of a training camp practice.

6) The Eagles eventually paid Peters, and he went back to LT. In Week 1, Nate Herbig started at RG, and Jack Driscoll started at RT. During the game, Driscoll got hurt, and Jordan Mailata, who is more comfortable at LT than he is at RT, filled in. Pryor, who is more comfortable at RT than he is at LT, stayed on the bench. In other words, Pryor was, at best, the tenth lineman in the pecking order. He got leapfrogged by Herbig, Driscoll, and Mailata.

Ultimately, however, due to an absurd number of injuries along the offensive line, he played in 15 games in 2020, starting 10 (6 at RG, 4 at RT). Last offseason, we took a detailed look at Pryor's limited action in 2019, and came away with the following conclusion:

Pryor is a backup only, in my view, and maybe only at guard. His size and power are nice, but if he were to have to start multiple games, opposing defensive coordinators would look to put him in situations where he was forced to try to handle speed, and I don't think that would go well.

As expected, he was better at guard than he was at tackle, though he wasn't exactly good at either spot.

#JimmyVerdict: Jason Peters very likely won't be back. Jason Kelce could retire. Brandon Brooks and Lane Johnson and aging and have significant injury concerns. Ideally, you don't want Pryor to have to play, but he's a body, and the Eagles will likely need bodies. Stay.

Juriga was an undrafted rookie free agent center who spent the first three weeks of the season on the practice squad, before being elevated prior to Week 4 to the active roster. He was active for every game thereafter, and actually appeared in 13 games in 2020, mostly on special teams. He got 14 snaps in 3 games with the regular offense, mostly as the sixth lineman Week 17 against the Football Team.

Opeta appeared in eight games in 2020, starting two, both at LG against the Giants. It did not go well, which was probably to be expected of a guy playing for the first time, and against an underrated Giants defensive front.