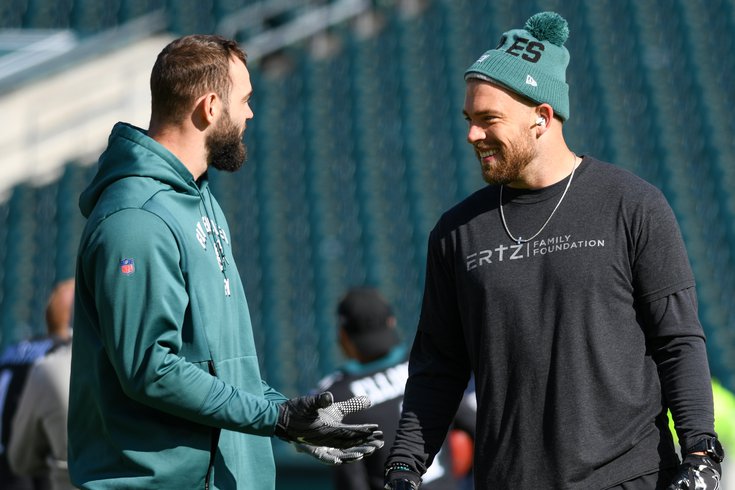 The Philadelphia Eagles were once thought to have the best one-two tight end combination in the NFL in Zach Ertz and Dallas Goedert. Now? Eh, not so much. Today we'll turn our attention to which tight ends will stay, and which ones will go in 2021.

Prior to the 2020 season, Ertz made it known that he was unhappy with his contract situation, after seeing George Kittle and Travis Kelce get new deals. We argued back in August that the Eagles should be in no rush whatsoever to do an extension with Ertz, and as it turned out, it's one of the rare correct things the front office has done in a while.

Ertz himself seems to know the end of his tenure in Philly is coming soon, as he got emotional in his season-ending press conference.

Zach Ertz had a heartfelt message to Philadelphia after what could have been his final game as an Eagle.😥 pic.twitter.com/2LfDdyFqsT

As for what the Eagles can get in return for Ertz via trade, I wouldn't hold out hope for much, if anything. To begin, the team has no leverage, in that the rest of the league already knows that the Eagles have to make difficult choices before the start of the new league year, which is simultaneously (a) the deadline to be cap compliant and (b) the time at which trades are permitted once again. In other words, a release would help the Eagles get under the cap by the deadline, but a trade would not.

But beyond that point, Ertz's value isn't even particularly high at the moment anyway. He's 30 years old, he just had his worst season as a pro, he now has a pretty extensive injury history, and (as noted already) his base salary in 2021 is going to be $8,250,000 in a year in which the salary cap is going to be around $30-$40 million less than was projected, pre-COVID.

#JimmyVerdict: Go. And the Eagles probably won't even get anything for him in return. I do think there's a scenario in which Howie Roseman keeps Ertz around on the stubborn belief that he can extract a draft pick from some other team, the rest of the NFL calls his bluff, and an already bad situation only gets worse.

Like Ertz, Goedert missed five games, but his numbers were better across the board:

Goedert led the team in yards per game, receptions of 20+ yards, receiving first downs, and his 203 yards after the catch were second only to Miles Sanders.

And yet, it almost felt like something of disappointing season for him, given Goedert's high expectations entering the season, and the added snaps he received as a result of Ertz's absence. Still, Goedert is clearly a starting-quality NFL tight end, whose ceiling arguably has yet to be reached.

Rodgers stayed healthy for the first time in his Eagles tenure, and he actually made some plays in the passing game. On the season, he had 24 catches for 345 yards (14.4 YPC) and 2 TDs.

However, he is a below average blocker, and you can pretty clearly see he's not exactly an athletic specimen when running with the ball.

Rodgers is now 29 years old, and the Eagles need to get younger. If they can't find younger tight ends competent enough to play immediately with some level of upside, I can see the logic in bringing Rodgers back at the veteran minimum for one more season, and punt the need for a good, young backup tight end to 2022.

#JimmyVerdict: While not ideal, the guess here is that Rodgers will be an Eagle again, just for the purpose of putting a competent player on the field in the short-term, especially if they move on from Ertz. Stay.