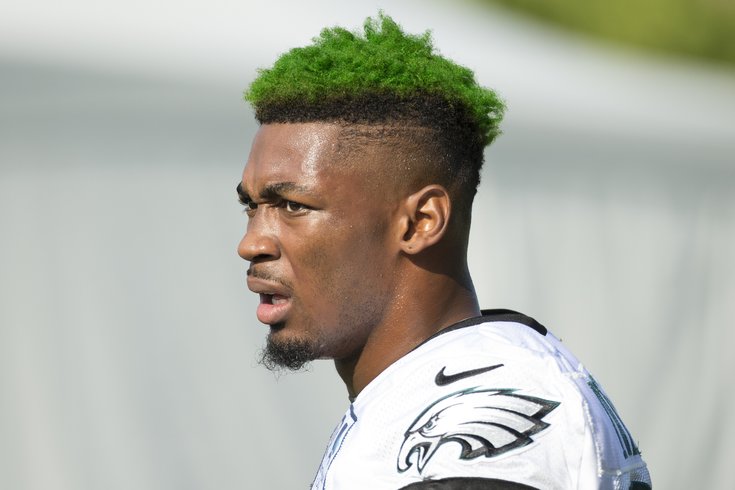 Some names Jalen Mills' teammates have called him so far are the "Green Goblin," the "Joker," and "Skittle Head."

Like yesterday, there were just a pair of 7-on-7 sessions, which isn't much in the way of overall team drills. Still, here's what I saw:

• It seems like most times when a defensive back has an impressive pass breakup, once the receiver and DB untangle and we get a look at who made the play, it's Jalen Mills. If you read my stuff regularly, I'm going to sound like a broken record here, but Mills got an extended look as the nickel corner with the first-team defense in OTAs and minicamp, and he looks like he might be a player. He played with confidence, trusted what he saw, and often got his hands on the football. He didn't look at all like a rookie.

One of his deficiencies as a player in college was that he often didn't play with a physical demeanor, often being content to let his teammates make tackles instead of aggressively hitting ball carriers. Mills has proven beyond doubt that he can play in shorts, but the real test will come they put on the pads.

• Yesterday, we praised undrafted RB Byron Marshall for making a number of plays and showing some ability in the passing game. It was brought to my attention that he also had a couple drops that I didn't see. (It's impossible to see everything). He also had a drop today. Still, Marshall does have ability as a receiver and looks to maximize yards after the catch.

• We noted yesterday that CB Aaron Grymes had an athletic pass breakup. Today, Grymes picked off Sam Bradford on a ball that glanced off the fingertips of QB/TE McLeod Bethel-Thompson. At 25 years of age, Grymes is a little order than most of the guys here at rookie camp. He had a four-year college career at Idaho from 2009-2012, where he had just three interceptions and 13 pass breakups. He played for three years with the Edmonton Eskimos from 2013-2015, where he had eight interceptions and 14 pass breakups.

• Of the undrafted wide receivers, the player who seems to be the most active so far is Paul Turner, who had modest stats in his final two seasons at Louisiana Tech.

Turner is a little undersized at 5'11, but he has done a nice job working the middle of the field. He also made a play down the sideline today, when Sam Bradford dropped a beautiful pass in the bucket to Turner over JaCorey Shepherd.

To note, undrafted wide receivers don't make the team as often as you might think. By my count, over the last 10 years, only Damaris Johnson (2012) and Hank Baskett (2006) made the team as undrafted free agent receivers, and in Baskett's case, the Eagles traded former third-round pick Billy McMullen for him.

• With three ACL tears under his belt, Travis Long is probably a long shot to make the roster. However, Long had a nice diving pass breakup today. Long is clearly a guy who loves football to even attempt a third ACL comeback just to try to make a roster.

Carson Wentz had a nice day. His intermediate passes are on a line. There's no air under them at all, and they reach their targets quickly. On the negative side, if I'm going to nitpick, there are occasions when he'll stare down his receivers. There was an egregious example of that during minicamp, but a couple much more minor examples of it today. And that's fine -- Number two overall pick or not, Wentz, as we know, is, you know, a rookie.