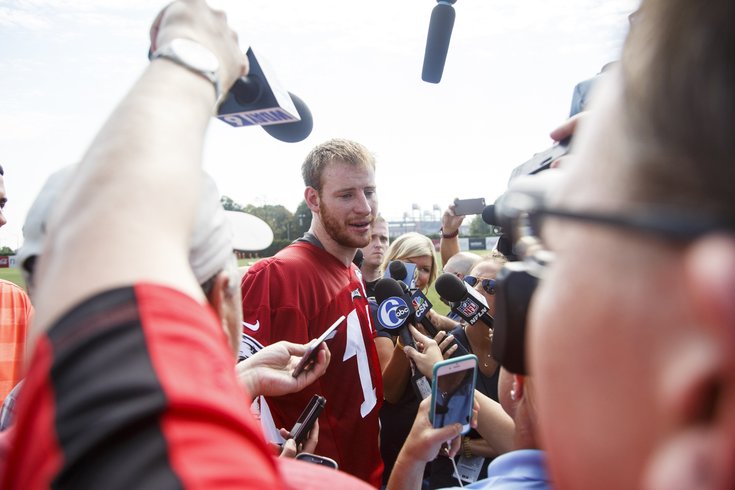 It’s almost a shame that the start of Eagles training camp overlaps with the Democratic National Convention in Philly. There’s so much political activity going down right across the street from the NovaCare Complex, and poor Carson Wentz won’t be able to use this week as a networking opportunity.

Because if this whole football thing doesn’t work out for the rookie from North Dakota, he may have a future in politics. Ideology and platform aside, he's got the whole speaking-without-really-saying-much-at-all thing down pat.

No matter the level of coverage his North Dakota State Bisons got during his time in college — shoutout to the reporters from Fargo, ND in attendance on Monday — it can’t possibly compare to the media attention given to NFL players.

Specifically to quarterbacks. Especially in Philadelphia.

But that doesn’t seem like it’s going to be a problem for Wentz. Not yet, at least. A better test will come the first time the second-overall pick struggles or gets in trouble. For now, however, we can only go off the relatively small sample size we have.

That’s about four and a half minutes of Wentz’s session with the media. Did you notice anything about it?

Pretend for a second that you work on the Eagles media relations staff. It's time to prep Carson Wentz for post-practice interviews. You'd probably identify some potential questions he'll be asked, and then give him step-by-step instructions on how to answer. It might go a little something like this:

Eagles: "They're probably going to ask you about coach's plan for you, Sam and Chase, and whether or not you agree with it."

Wentz: "Oh man, that's a tough one because I want to start but Sam's my buddy. What should I do?"

Eagles: "Easy. First, tell them it's not your decision. They love it when players respect authority. Then, tell them all you can do is work to get better, because that's what this is all about right? Putting team before self is always a crowd-pleaser. And finally, tell them you're going to be ready when the time comes."

Eagles: "Oh, yeah. Keep it short and simple. It gives them less to pick apart and pull out of context."

Wentz: "I can handle that."

And he did. In fact, he nailed it.

While he looks engaged and not at all bothered by his obligation to speak to media, his answers are brief and considerably less than revealing. In a word, they're safe.

Here's the actual quote from Wentz when he was asked about the Eagles' plan to start him off as the third-string quarterback:

“You know, it’s totally out of my control. I’m just out here every day. We got a long camp ahead of us, we got a lot of work to put in. And the biggest thing I’m focused on is just helping this team get better and getting myself better. And I can guarantee whenever my number is called, I’ll be ready.”

On Monday, that was about as long of an answers as Wentz would give.

Now apply that thinking to any of the questions he was asked and go back an listen to the answers. They're about as vanilla as you can get. Actually, that's wrong. Vanilla at least has a flavor. These were more like dry cardboard.

The most interesting thing he said was about being woken up at 5 a.m. by the same storm that woke his coach early Monday morning. And even when asked about his recent viral bathroom mishap, a chance to perhaps draw a chuckle from throng of reporters, he deflected.

“I thought it was funny," Wentz said. "I’m not going to mention what happened. I like you guys making up your own stories; they kind of crack me up. I didn’t think it would blow up like that, but I did think it was funny. So it is what it is.”

Come on, man. Give us something that resembles personality.

As a reporter, it's not fun having someone play defense as you attempt to peel back the Shrek-like layers and get to the human being underneath. As an NFL coach, general manager or owner, however, guys like Wentz are exactly the type you want being the face of your franchise.

We don't know Wentz personally, but professionally, he's just not interesting. Luckily for him, he doesn't have to be in order to be a fan favorite.

That will come with wins.

Here's the full of the transcript from Wentz's Q&A, some of which did not make it into the above video.

What are your feelings like on Day 1 of camp?

What did you work on the past few weeks?

What are your feelings like on Day 1 of camp?

“It was a long time coming. It was a long offseason and then then summer went really quick. It was a hot day, but it was fun to get out there with some of these guys.”

What did you work on the past few weeks?

“Really just my footwork and refining my mechanics. You’re never a finished product in this league and especially as a young guy, there’s a lot of work to do and really it was just my footwork, trying to hone that in as best as I could.”

Are you used to having all eyes on you?

“Getting used to it. It kind of is what it is. You block it out quite a bit but when you’re playing, it’s just football. You don’t work about it too much. It comes with the territory.”

A lot of media here, including from Fargo. What’s that like?

“It’s awesome. It doesn’t surprise me. The support that I have, that the North Dakota State University program has is unbelievable back home. And that support is awesome and I’m glad they can be out here.

How was the week in San Diego with Sam Bradford and Chase Daniel?

“It was good. We just got out there and got some good work in. For me, it was just big for timing. Getting timing down with some of these guys and [it was] good to just be around them off the field. It was a good time.”

Could you sleep last night?

“It was OK until the thunderstorm broke. About 5 AM, it was cracking pretty good. I slept pretty good.”

What did Sam Bradford and Chase Daniel tell you?

“We’re just trying to really explore this offense together. Chase obviously has been in it for a long time and Sam has a ton of knowledge just from being around other systems. So I’m just trying to soak up as much information from them as I can and so far they’ve been very helpful.”

Did you talk to them about footwork?

“Yeah, especially Chase because he’s been in it. Out in San Diego, footwork was something we talked about a little bit.”

Where have you grown the most since stepping on Eagles property?

What’s the objective from now until Week 1?

“Just get better, just like the same objective as the whole team has. Just to get better and keep getting better as a team. Individually, we all got to elevate our game every time we come out here. We got a lot to learn especially out here today with a lot of the young guys. The goal is just to get better and take a step forward every day."

Is it cool to see former teammate C.J. Smith here?

“Yeah, it’s pretty cool. We’ve been at North Dakota State for all five years together, we came in together. So a good friend and it’s cool to come out here and still be competing against him trying to go over the top of him as much as I can. So it’s pretty fun.”

“You know, it’s totally out of my control. I’m just out here every day. We got a long camp ahead of us, we got a lot of work to put in. And the biggest thing I’m focused on is just helping this team get better and getting myself better. And I can guarantee whenever my number is called, I’ll be ready.

Your biggest goal heading into the season?

“Just to keep getting smarter, keep understanding the offense. Like I mentioned, every day is a process. There’s a lot of film to be watched, there’s a lot of knowledge to soak up. Every day, I just want to get better in that area.”

Is this like a redshirt year for you, almost like at NDSU? Are you using that same type of mentality?

“It’s a little different. Coming out of high school to North Dakota State, it was kind of a whirlwind. The high school offense is pretty dumbed-down by comparison. I think I have a good grasp of the offense coming in here and I feel pretty confident. Similar, but a little different at the same time.”

A lot’s been made about the relationship you have with Bradford. How’s that going?

Do you feel the excitement and pressure around the city on you this season?

“I just feel excitement for Eagles football. It’s unbelievable out here. A lot of you have been here for a while — obviously, it’s new to me — but the passion and just everywhere you go, everyone knows what’s going on with Eagles football. So that’s really exciting to be a part of this.”

What’s been the biggest surprise for you?

“Honestly, I mentioned it a couple weeks ago, but I’ve just been surprised by how great of a locker room it is. It’s just a great atmosphere, a lot of good guys. You know, you hear about it and think it’s just a business and you hear all these things, but just coming in it’s just a group of guys that are all competing and trying to get better.”

What did you learn during your week in California with your new teammates?

“Just got to know them. Just learned that they’re a bunch of great guys. We all get along. We all come from different places, different backgrounds, you name it. But everyone wants the same thing, and that’s to get better, but off the field, I’m developing some really good relationships, friendships with those guys.”

Were you surprised by how much attention you got for locking yourself in a bathroom?

“I thought it was funny. I’m not going to mention what happened. I like you guys making up your own stories; they kind of crack me up. I didn’t think it would blow up like that, but I did think it was funny. So it is what it is.”