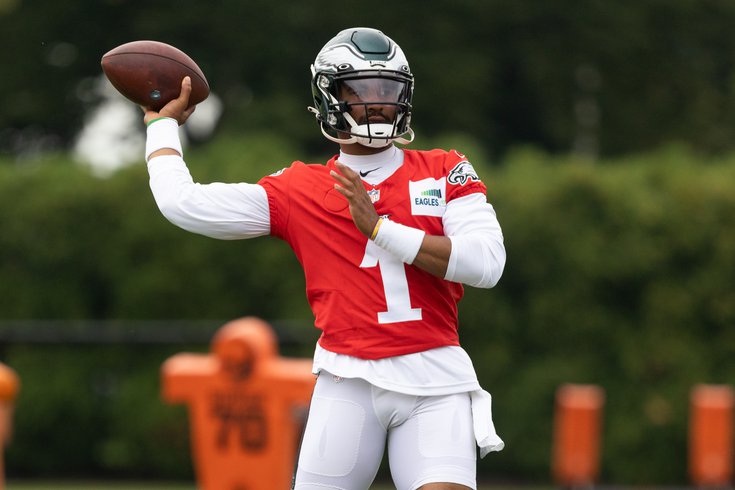 Day 4 of Philadelphia Eagles training camp got a late start at 5:30 p.m. on Saturday evening, because NFL Network was running day-long look-ins at all 32 NFL camps, and that required the Eagles to start later than usual, or something? Whatever, who cares. That practice is in the books, and as always, we have notes.

• We're four days into camp, and while that isn't exactly the biggest sample size, the Eagles' offense has not looked sharp and I believe it starts with the quarterback.

Certain types of players are less likely to stand out in training camp practices, especially ones in shells and shorts (as in, unpadded practices), because their style of play is better suited for live game action. For example, a power running back is typically not going to impress as much in 7-on-7's as he would in live tackling sessions. Or, a big run-stuffing defensive tackle is going to have a harder time proving his worth than a quicker interior pass rusher.

Still, Hurts has neither gotten the ball out quickly, nor accurately, as he has missed plenty of makeable throws and often failed to pull the trigger on quicker throws that have been open.

In 2020 camp, Hurts was constantly running with the ball, which doesn't serve any real purpose in improving. During the regular season, he was also quick to tuck and run if his first option or two wasn't there. It's not at all out of the ordinary for quarterbacks who possess the type of running ability that Hurts does to lean on that skill as a young player.

I have been looking to see if Hurts would be trying to refine his skills in the pocket in his second camp, since July and August is the time to iron out some of the areas where you're not quite as comfortable. He has definitely been more willing to operate from the pocket before bailing in Year 2 than he was as a rookie, so that's good to see. However, if there was any hope that Hurts was going to enter 2021 training camp and his accuracy issues would be substantially fixed from the jump, that has not happened, and frankly, shouldn't have been expected to happen, because the skills where Hurts is deficient (quick, accurate throws, for example) are developed over time.

Ultimately, the result on the field has been that the defense is winning the majority of these practices so far, and the offense has looked sloppy. Obviously, there's a long way to go before the start of the season.

• Hurts did make a really nice throw to Zach Ertz down the sideline for a big gain on Saturday. Ertz dusted Elijah Riley on a wheel route.

Derek Barnett tried out a move in which he faked a spin to the inside, then spun back to the outside vs. Andre Dillard. It looked a little clunky, but it still beat Dillard, who held Barnett. Dillard did regroup on the next rep against Barnett when Barnett's low outside dip move ended with Dillard pushing him into the ground.

There was a rep in which Jordan Mailata stoned Josh Sweat in his tracks. It was a clear win for Mailata, and yet, Jeff Stoutland was all over Mailata after the rep for something he didn't like about Mailata's hand fighting. I actually think that's a great sign for Mailata, in that Stoutland might've praised him in previous years for that rep, but is now all over him about a finer detail.

Jack Driscoll has been impressive in 1-on-1's. He handled Ryan Kerrigan and Brandon Graham on Saturday, and has had good battles with Kerrigan throughout camp. If you'll recall, Lane Johnson was a late scratch Week 1 against Washington, forcing Driscoll to start against one of the best defensive lines in the NFL. The Eagles didn’t give Driscoll a lot of help, possibly because they already had their game plan installed already, and Driscoll was tasked with his share of one-on-one blocking assignments against a mix of Kerrigan, Chase Young, Ryan Anderson, Montez Sweat, and some reps against interior guys like Jonathan Allen. He held up better than anyone could have reasonably expected, and clearly outplayed the LT in that game, Jason Peters.

Driscoll looks very comfortable in pass protection, which is what matters most. He did not impress in the run game as a rookie, and on Saturday, he got blown up by Graham on a run play.

Driscoll's future with the team will be interesting, because he's a worthy NFL player, but where will the Eagles play him? Last year, the Eagles likely would have cross-trained Driscoll at tackle, guard, and maybe even center, but they opted not to because of the COVID-shortened offseason. Instead, they had him focus in on tackle. Thoughts:

Perhaps the answer is that the Eagles will try to develop him into a "jack of all trades," pardon the pun, who can come off the bench and play any position, if necessary. Those kinds of players can be very valuable. For now, I think his clear best position is tackle.

Brett Toth has had a nice start to camp, and the Eagles have even slid him inside on occasion. They wouldn't bother if they didn't see something in him. He had a nice rep against Tarron Jackson on Saturday.

Milton Williams flashed. He had a quick, twitchy move on the interior that beat Nate Herbig. Former trench guy Barrett Brooks was standing next to me for that, and he was impressed by Williams' explosiveness.

Travis Fulgham battled Steve Nelson (yes, he now wants to be called Steve, not Steven) on several reps. Fulgham killed the Steelers last season, Nelson included on a few occasions, but Nelson got the better of Fulgham on Saturday, as he had close coverage on all three of their matchups. Fulgham did have one catch on an in route against Nelson.

Quez Watkins made a nice play on an underthrown deep ball. He outjumped Michael Jacquet down the sideline and made the catch. Saturday was Watkins' first action of the summer, by the way.

I thought Craig James had a nice day in 1-on-1's, though he had the advantage of covering slow-footed rookie UDFA Jhamon Ausbon. James had multiple pass breakups.

• The Eagles' screen game was a total mess last season under Doug Pederson, and is something that must improve significantly in 2021. So far, screen attempts, like mostly everything else offensively, have been sloppy. They did pop one on Saturday though, as Lane Johnson and Jason Kelce led the way in front of Miles Sanders.

• I like Sanders' mentality as a player. In interview sessions, he has taken ownership of his passing game struggles last season, and is working to fix them. On Saturday, he was down the field blocking hard against Zech McPhearson on a Hurts QB run, so much so that Rodney McLeod starting yelling "WHOA WHOA WHOA!" from the sideline, as if to say, "Settle down, Miles." Sanders smiled and was talking trash back to McLeod on his way back to the huddle.

• Jason Huntley has wheels. He showed some serious juice running down the sidelines Saturday night, and is very clearly the fastest back on the team. Huntley had 59 career kick return attempts in college, averaging 25.8 yards per attempt, with 5 TDs, and he stuck on the Eagles' roster for the entirety of the season in 2020 after they claimed him on waivers. As such, I like his chances of making the roster, and he even made my pre-camp 53-man roster projection.

However, he has not caught the ball well in camp so far, and he had a bad drop on Saturday. That's somewhat peculiar, since he averaged 42 catches per season his last three years at New Mexico State.

• Staying on the running backs, if there was any doubt about Boston Scott's status with the team in 2021, there shouldn't be. He's a roster lock, as he has gotten plenty of time with the first-team offense, and has been active in the passing game.

• DeVonta Smith got hurt early in practice, and did not finish. He did not go to the medical tent or back inside the building or anything like that, but he did watch the majority of practice from the sidelines. The Eagles said after practice that it was a minor leg injury. To be determined if Smith will be back out there on Monday.

• Jake Elliott kicked field goals for the first time in camp, and he's off to a shaky start.

On his second kick, the one that was good from 38, Elliott barely squeaked it through the uprights. Elliott had his worst season as a pro in 2020, and he missed some short kicks. He needs a bounce-back season in 2021 to ensure he remains on the team in 2022 and beyond.