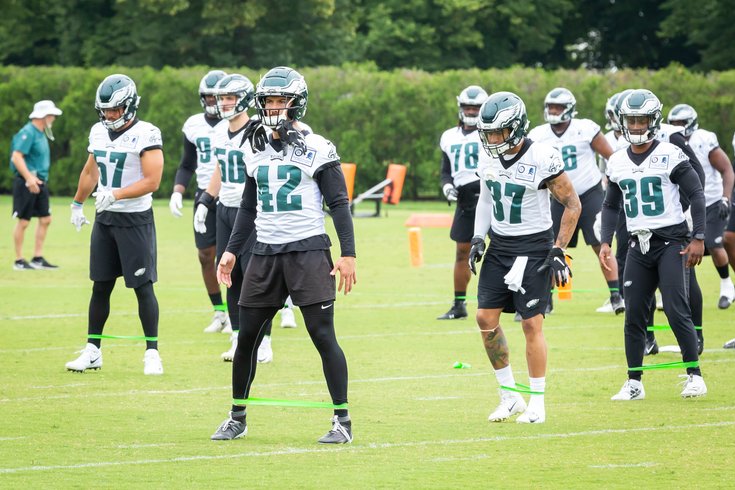 Leading up to training camp, we'll take a look at every player on the Philadelphia Eagles' roster, and how they fit with the team. In case you've missed any of our previous positional previews, you can catch up here.

Today we'll look at the safeties.

While his stat line (97 tackles, a sack, three FF, and a pick) wasn't eye-popping by any stretch in 2018, Jenkins held together a secondary that was missing the following players for extended periods of time:

Jenkins was the lone constant, and without his leadership, the entire defense might have completely folded. Take your pick between Jenkins and Fletcher Cox as the team's most valuable player last season.

As such, Jenkins missed voluntary OTAs (something he has never done before), and there was a lot of hand-wringing over whether or not he would show up to a mandatory minicamp. He did, however, he was clear to note to a gaggle of reporters that he wants a new deal, that frankly, he rightfully deserves.

His contract, when he signed it, was an average per year of $8,750,000. That is now ninth in the NFL. As a player, Jenkins is arguably a top-five safety in the NFL. He's now 31, but has shown no signs of slowing down. Add in his intangibles mentioned above, and his value to the team can't be overstated.

This offseason, a bunch of safeties got paid. Here's how they fared on the open market:

Jenkins is better than Landon Collins. He's also better, in my view, than post-ACL tear Tyrann Mathieu. And yet, he's making roughly 60 percent of what they're making.

Jenkins still doesn't have a new deal, but as of week before the start of camp, there have been no substantial reports that he intends on holding out.

McLeod took a pay cut this offseason to stay with the team, and he'll be a free agent in 2020. His 2018 season was off to a good start, but he missed the final 13 games of the regular season with a serious knee injury. His replacements were, uh, not great. It was originally thought that McLeod "only" tore his MCL Week 3 against the Colts, but it was later revealed that he also tore his ACL. McLeod thinks he'll be ready to go for the start of training camp.

We're going to rehash compensatory picks here, so if you're a regular reader of mine, you may as well just skip to the next player, because you've probably already read some version of this.

In case you're unfamiliar with comp picks, the short-short explanation is that teams are awarded free draft picks if they lose more players in free agency than they gain.

Fort and Sendejo would currently cancel out Hicks and Matthews, leaving the Eagles with two comp picks earned, as we note in our compensatory pick tracker (h/t OverTheCap).

If the Eagles cut Sendejo, he would no longer count toward the comp pick formula, and Hicks would therefore no longer be cancelled out. Instead, the above cancellation chart would look like this:

So the Eagles would have an extra (projected) fourth round compensatory pick for the loss of Hicks. Got it? OK, good.

So the question surrounding Sendejo during camp will be, "Should the Eagles just keep Sendejo instead of preserving the fourth-round comp pick?"

On the one hand, the Eagles are a Super Bowl contender, and if they really like Sendejo as a third safety, then OK, just keep him. On the other hand, Sendejo is a box safety and sort of an oddball fit in this defensive scheme, and, you know, is he even good anymore?

In my view, there are better options at safety who wouldn't have cost the Eagles a fourth-round pick. We'll see how it plays out with Sendejo during camp.

Sullivan got a lot of playing time down the stretch when the Eagles started playing a lot of three-safety sets. He went from a special teamer-only who never saw the field otherwise, to a guy who saw a small handful of snaps, to a regular contributor.

While injuries certainly played a part in Sullivan's increase in playing time, it seemed that he earned more trust from Jim Schwartz along the way. Apparently not, considering the Sendejo signing.

The Eagles selected Countess in the sixth round of the 2016 NFL Draft, but he did not make the final 53-man roster, and the Rams promptly scooped him up off of waivers. Countess played in 37 games for the Rams, collecting 44 tackles and two interceptions, mostly as a reserve and special teams contributor.

The Rams waived Countess because he was going to count for $2 million on their cap in 2019, but they reportedly hoped to bring him back at a cheaper number. Instead, the Eagles claimed him on waivers.

The Eagles traded a seventh-round pick for Hall, and he spent the entire season on the 53-man roster. Despite the absurd number of injuries in the Eagles' secondary (including at safety), Hall played a grand total of six defensive snaps. If Howie Roseman gets bored one day during camp, maybe he'll trade Hall to his old buddy Joe Douglas for some other back of the roster guy.

Undrafted free agent of the Bucs in 2018, two career tackles.