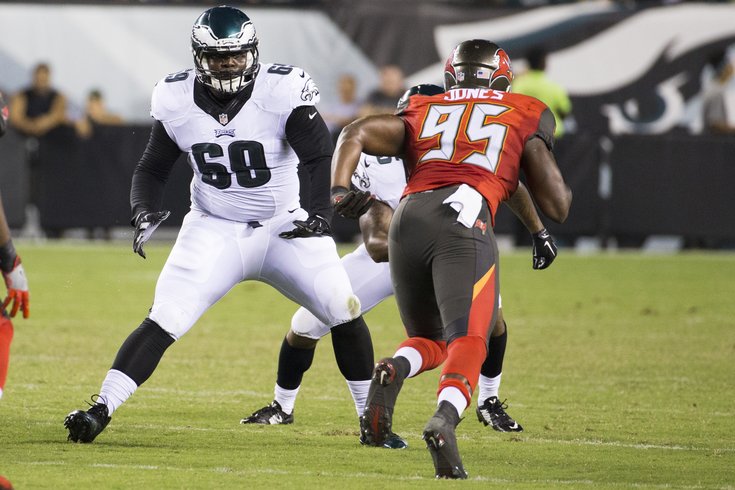 Most Philadelphia Eagles fans know the story of Jason Peters, who entered the NFL as an undrafted tight end out of the University of Arkansas, before the Buffalo Bills decided that his best position would instead be at left tackle.

At Arkansas, Peters had 27 career catches for 288 yards and 4 TDs, which of course are underwhelming stats. You can see three of those catches in this video via NFL.com (click it twice to be re-directed to YouTube):

The Eagles brought a similar project aboard this offseason, when they signed former LSU tight end Dillon Gordon, and moved him to offensive tackle. Gordon is listed at 6'4, 322, although he says he's closer to 310. Since Gordon's arrival, Peters has been a mentor.

“We have very similar backgrounds, playing tight end in the SEC, switching to offensive line in the league, and he also tore his Achilles like I tore my Achilles," said Gordon. “He really took me under his wing from the very beginning. He’s just been teaching me things every day just to better my game. I’m just taking it all in, trying to learn from the best.”

Tight end is the only position Gordon has ever known on the offensive side of the ball, from high school through his time at LSU. Like Peters, Gordon didn't set the stat sheet on fire. For his career at LSU, Gordon was mainly used as a blocking tight end, as he had just 7 catches for 96 yards and no TDs from 2013-2015.

The Eagles made the decision to not only convert Dillon to the offensive line, but to also try to make him into a left tackle, the hardest and most important spot on the line.

“I think just being such an athlete who can play multiple positions, you have to be athletic to play that left tackle position," said Gordon.

The Eagles haven't stopped there. They've also lined him up as a tight end, and given him a significant number of reps as a fullback during training camp. They even gave him (by my count) three snaps at fullback in the second preseason game against the Steelers, noted below.

On this first play, Gordon blocks the linebacker, helping open up a hole for Kenjon Barner.

On his second snap, the play goes nowhere because the LG misses his block, but watch Gordon's agility getting out to the edge and moving the linebacker.

And finally, on his third snap, watch number 40 on the Steelers. He wants no part of taking on this block from Gordon.

Gordon could make the final 53-man roster as a versatile player who can be the fourth tight end / fullback in the short term, while the team tries to develop him into a left tackle in the long term.