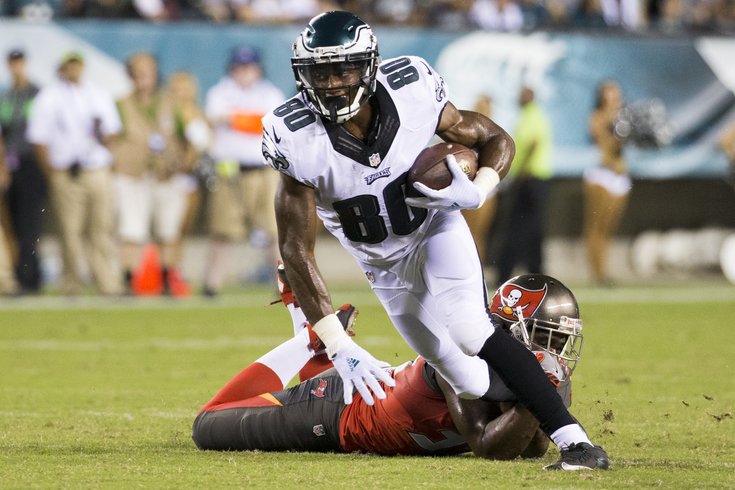 "P.T. Cruiser?" Meh. We'll come up with something better.

Every offseason, the Philadelphia Eagles (and every other team, for that matter) will bring in about a half-dozen undrafted wide receivers into training camp. Typically, those receivers amount to little more than camp bodies who may make an occasional nice play.

The odds of undrafted free agent receivers making an NFL roster are long. Over the last 10 years, for example, only Damaris Johnson (2012) and Hank Baskett (2006) made the Eagles' initial 53-man roster as undrafted free agent receivers, and in Baskett's case, the Eagles put a high priority on him when they traded former third-round pick Billy McMullen to the Minnesota Vikings for him.

To begin, Turner has played well. From the outset of training camp all the way through the conclusion of camp, Turner has made catch after catch after catch, mainly working the middle of the field, and occasionally breaking free for longer catches down the field. There's little question he made more catches than any other receiver in camp, and personally, I don't even think it was close. That has led to Turner occasionally getting reps with the first team offense.

"P.T., I love watching him ball," said Eagles receiver Jordan Matthews. "He's been great. If there's one thing that's come out of me being out, it's him getting extra reps. I think he deserves those reps. He's worked extremely hard, he's been consistent in camp too. So you like to see a guy like that be able to come in when a guy like me goes down and be able to make plays."

But equally important for Turner's chances is that the Eagles' wide receivers this season are incredibly flawed players who have not stood out in positive ways. Rueben Randle's effort has been awful, Chris Givens has been invisible, and Josh Huff still does not resemble a consistent receiver heading into his third year in the NFL. With Jordan Matthews, Nelson Agholor and Dorial Green-Beckham likely occupying at least three roster spots at wide receiver, Turner has to beat out at least two of Randle, Givens and Huff to make the cut.

"He's really beginning to stand out," said head coach Doug Pederson Thursday night. "He made a couple good catches tonight, and he's a kid who comes to work every day, hard worker, nose to the grind and doesn't say much, but does his job. I'm pleased with where he's at right now."

"I feel like I'm doing an OK job," said Turner, when asked if he has performed as well as any receiver on the team. "I feel like there's a lot of room for improvement."

Turner had modest stats in his final two seasons at Louisiana Tech.

He is undersized at 5'11 and he lacks top end speed (4.53 40 at Louisiana Tech's pro day), but he has indeed been better than any Eagles receiver in camp, with the exception of Matthews, who minimized Turner's height and speed.

"The biggest thing is Paul's mindset," said Matthews. "I think that's before anything. When people came to me last year and people said, 'What's the biggest thing the receivers need to improve,' I was like, 'It's confidence.' It's all about confidence. Confidence and mindset. Football is all about playing on the five-inch field (in your head). Before you even get to height, weight, any of that stuff, it's what kind of mindset does a guy have going into a game? P.T., ever since he's come into practice, training camp, OTAs, all those things, he's always had a great mindset. He's very calm. He'll make a big play and act like it didn't even happen. He just goes right back to the huddle, and that's just his demeanor. That's just who he is."

The one area where Turner has not yet stood out is on special teams, which is usually a necessity for undrafted players to make a final roster. If special teams coach Dave Fipp feels that Turner can be a contributor there as well (and maybe even if he doesn't), Turner should be a no-brainer to earn a roster spot.