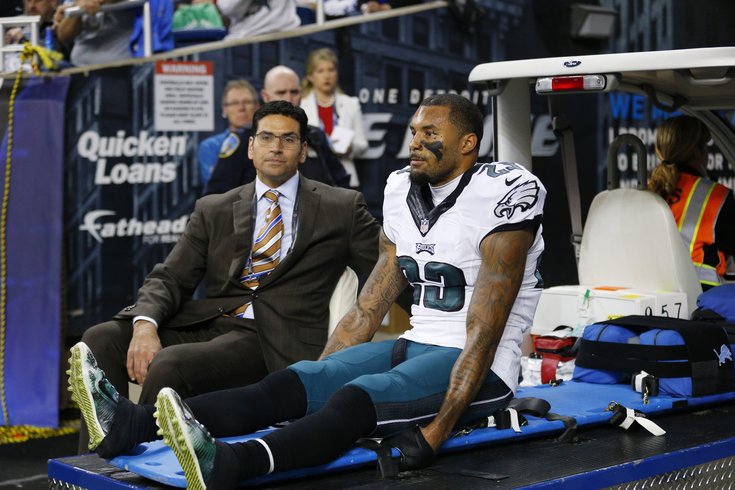 Nolan Carroll's ankle injury scared away a number of suitors this offseason, to the Eagles' benefit.

During the 2015 offseason, the Philadelphia Eagles expended heavy resources on the cornerback position, when they signed free agent Byron Maxwell to a lucrative contract, traded up in the second round of the draft for Eric Rowe, and used two more draft picks in the sixth round on JaCorey Shepherd and Randall Evans.

Heading into spring practices in 2015, Eagles cornerback Nolan Carroll was something of an afterthought. The previous season, Carroll played well, but in a small role as the dime back. During the offseason in 2015, coaches raved about his progression from his first year with the team to his second, which they attributed to a strong work ethic.

During training camp in 2015, Carroll beat out the rookie Rowe for a starting job, and in his elevated role, Carroll was arguably the Eagles' best corner until he broke his ankle against the Detroit Lions on Thanksgiving.

Heading into the 2016 offseason, Carroll, now a free agent, was once again less publicized than others at his position, and seemingly not a priority of the team to retain. The Eagles aggressively locked up many of their own players to long-term deals prior to the start of free agency, but not Carroll, who sat on the open market for a week before signing a modest one-year deal worth $2,047,500 to remain with the team. That is less than what he made in 2015, and made him the 64th highest paid corner in the NFL, according to overthecap.com, a bargain for a starting corner coming off a solid season.

He was such an afterthought, in fact, that free agent acquisition Rodney McLeod, who signed a week before Carroll, was quickly given Carroll's old number (23). When Carroll re-signed, he had to take 22.

During free agency, Carroll drew interest from other teams around the league, who ultimately passed on him due to concerns about his ankle.

"That was the main concern was how I'd come back," said Carroll. "Would I be able to play football again? At the time in March, they had to guess and gauge, 'Will I be alright' (by training camp) and teams weren't really sure about it, so it is what it is.

"They didn't think I'd be ready for training camp."

According to Carroll, those teams included the Dallas Cowboys, Los Angeles Rams, and Miami Dolphins.

As it turned out, Carroll was indeed ready for training camp, and has played well throughout camp and the first two preseason games. By my count, last night, Carroll was targeted three times, resulting in an impressive pass breakup down the sideline, an offensive pass interference call, and a pick six:

Sometimes it takes corners a while to mature into good players in the NFL, and Carroll seems to be improving every year.