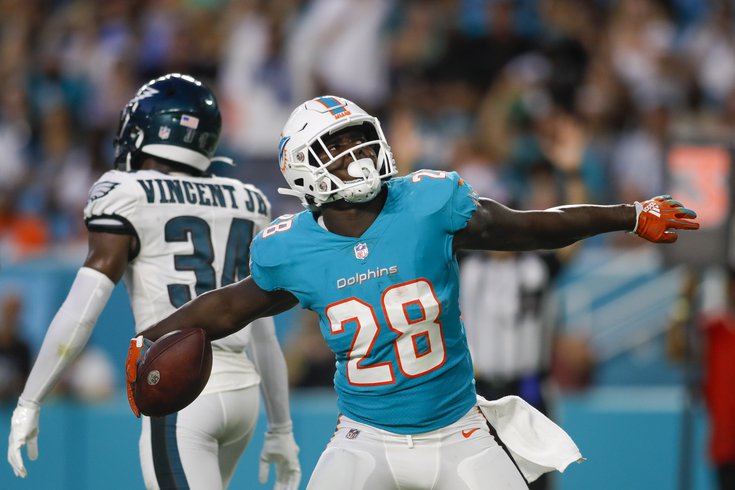 Dolphins running back Sony Michel celebrating a touchdown against Eagles players who won't make the roster in a meaningless preseason game.

The Eagles got their butts kicked in the final preseason game of 2022, the Dolphins running it up in a 48-10 blowout that was never close. When the game begins with the opponent's starters playing guys who may or may not make the roster, it's a recipe for a long and boring evening.

• Patrick Johnson getting a sack against Miami's first stringers was a nice early play for the Eagles on defense, and it was a stabilizing moment for a group that had been struggling up to that point. And who can blame them? A group of backups and third-stringers are going to fare poorly against top units for basically any team.

Thanks to this play, though, a promising drive for the Dolphins ended up stalling out, and it was basically the only thing that prevented Miami from scoring touchdowns on each of their first three possessions.

• I'm not sure how many tackles Devon Allen has in his history of playing football, but his speed showed up in a big way as a gunner on special teams Saturday night. Watching him hold onto ankles for dear life got a chuckle out of me, but credit to him for being in a position to stop that return before it could get going.

While he did not actively make a play to dislodge the football on Miami's muffed punt early in the third, Allen was right there ready to make a play once again. As Ross Tucker suggested on the broadcast, perhaps Allen's footsteps got a bit louder as that ball came down from the lights.

Allen still feels like an unlikely guy to make the roster, though offering a bit of value on special teams changes the conversation a bit. Can you justify keeping him on the active roster to take advantage of that speed? Feels like the answer is no, though he's made some standout plays in back-to-back games to close the preseason.

(Yes, we are desperate for nice things to say about this game.)

• It took until the fourth quarter, but we finally got an offensive highlight, with Jason Huntley taking an outside run to the crib for Philadelphia's first touchdown of the evening.

A good run for a guy who found daylight hard to come by for most of the evening.

• Two-plus quarters of Reid Sinnett at quarterback is, uh, certainly a thing you could do as a professional football team. Anyone who was not paid to watch this game (or related to Sinnett) who didn't turn the game off when he checked in is a special level of dedication.

With Sinnett at quarterback, it felt like 95 percent of his throws went no further than five yards beyond the line of scrimmage, and any throws that threatened to challenge that barrier made clear why he didn't do much other than check down and hit those short timing routes. Facing a third and 21 early in the second quarter, Sinnett delivered a near-perfect throw... to the Dolphins. By the grace of a higher power, he somehow managed to avoid getting intercepted on that play.

Here's the bad news: on his next series, Sinnett did end up throwing an interception with a bad throw to his left, and though he made the effort to get back in the play and prevent a touchdown, he ended up getting run through for six points anyway. You'd almost be better off falling down on your way to make the tackle rather than doing whatever this is:

The beginning of the second half went a bit better for Sinnett, who dropped a back shoulder fade into John Hightower and looked to be on his way to a better night. But miscues/drops from the guys out there with him ended up derailing that momentum. A lot of the drops throughout the night were also on imperfect throws that got qualifiers like, "It would have been a tough catch, but..." which indicates exactly how good the throws were.

(It was a pretty tough night for Deon Cain outside of the opening series, by the way, with Cain missing some golden opportunities to build off of a good camp/preseason. Whether one iffy performance weighs heavily vs. the body of work is up for someone else to decide, I suppose.)

Though I understand the desire to keep three quarterbacks on the roster at all times, there has to be another guy the Eagles can bring in to fill that emergency role over this guy. If you want to try to develop him and bet on whatever tools he has, you can afford to take the risk that you can put him on the practice squad, I think.

• For all the hate you could justifiably direct in Sinnett's direction, it should be pointed out that the offensive line play in front of him was not exactly stellar. Philadelphia's backups did a pretty good job against the Browns in their previous preseason game, so maybe we should conclude that Cam Jurgens is a real difference maker. With the rookie getting the night off, this group looked pretty bad, and that was with guys like Andre Dillard (who played well in Cleveland) available and on the field.

When Sinnett did have a bit of time to throw, he delivered some nice timing throws over the middle and picked up chunks of yards, but those opportunities were few and far between throughout the night.

• Getting this far down into the bad before touching on the defense is probably more protection than they deserve, and more protection than they were able to offer the Eagles on the field. Getting gashed by Miami's starters was relatively understandable, but the pain did not exactly stop once Tua Tagovailoa and Co. took their seats on the bench. Outside of a nice play here and there, this was a game filled with blown assignments, misreads, and plays where the Eagles simply got blown off of the line. Teddy Bridgewater may not be a world beater, but if you allow him to stand untouched in the pocket for most of the night, he's going to move the ball up and down the field.

Some of the guys who were out there on the field later in the game really should have done better. On Miami's touchdown midway through the third quarter, Davion Taylor sat back too far and watched as a fairly soft throw just sort of wobbled toward the end zone, ultimately falling into the hands of  Hunter Long for a touchdown. Taylor still being on the field at that point was a worrying sign for his chances of getting cut, and failing to come up with a play there only adds to the angst he'll probably be feeling on the flight back from Miami.

Even if there was some spectacular individual performance in this game, it's hard to get fired up about any one guy when a team gets boat raced like this. It's a relief this game meant less than nothing.

• I don't say this to disrespect Devon Allen, who was a true bright spot in this game, but hearing Ross Tucker say, "Hey, it's Devon Allen time!" when the Eagles lined up to punt down 34-3 may have been the most depressing sentence I've ever heard during a football game. Trying to get excited about a team punting while getting absolutely destroyed is where I draw the line.

• Look, I'm not sure there's a sane person alive who'd expect the Eagles' backup secondary to stop Tyreek Hill. Certainly not going to criticize the Dolphins for trying to get more reps in against hostile competition, but talk about a useless exercise to start this game. Honestly, even the word "backup secondary" doesn't go far enough to explain the competition Hill was up against.

What I will criticize/make fun of the Dolphins for is playing their starting quarterback for three series after the Dolphins came up with points on two of them. What are you trying to prove, man? It's the final preseason game. Putting him out there for a single series is one thing, but having him play basically the entire first quarter was absurd.

• Jalen Reagor was one of Philadelphia's starting receivers in their final preseason game, and Deon Cain was the guy who consistently created separation and got the ball thrown his way during that opening stretch. It seems Mr. Reagor will be on the roster yet again, but hard to feel at all inspired by that possibility.

• An extensive replay review with 20 seconds left before halftime of the third preseason game made me feel like I was being personally pranked. That's in "The Truman Show" territory. Somebody make it stop.

I spent exactly zero time this preseason writing about meaningful football. I am so glad this is over so we can move on to the real thing.

• I hope to one day have as much energy for anything as Dave Spadaro did for his Eagles Kids Club pitch.