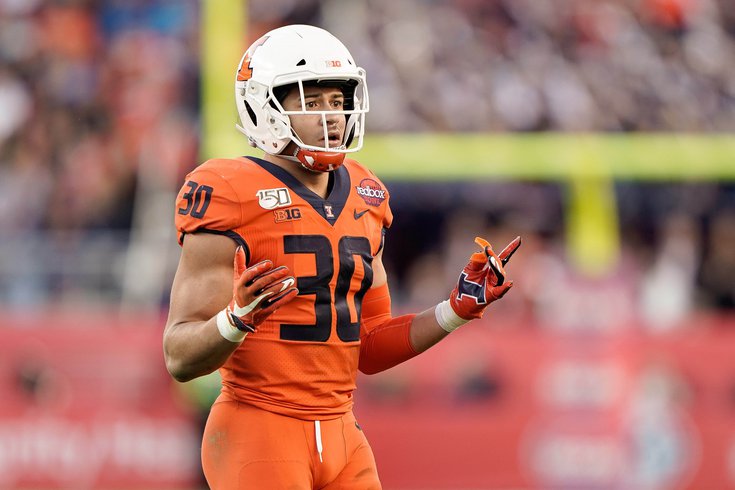 During the college football season each year, as long as you're watching the games, we point out five players each week to keep an eye on who make logical sense for the Philadelphia Eagles in the following year's draft. In case you were unaware, today begins "Week 0" of the college football season. It's not the most exciting slate of games, but it's football, so, whatever.

Mathis played his first four seasons at TCU, but transferred this offseason to Nebraska. He had his best season in 2020, when he had 44 tackles and 8 sacks. In his first game in 2022, Mathis will have matchup against projected Day 2 OT Peter Skoronski. A quick highlight reel:

Mathis has some intriguing athleticism and change of direction skills, and his home in the NFL might be as a SAM linebacker.

Brown had 81 tackles, a sack, and 2 forced fumbles last season. He made Bruce Feldman's "Freaks" list this offseason:

Sydney Brown, a 6-0, 211-pound safety, made All-Big Ten honorable mention in 2021, led Illinois with 81 tackles and also forced two fumbles. He added almost 6 pounds of lean muscle mass this summer while losing 1 pound of fat. He has also hit 22.4 mph on the GPS in-game.

The Eagles love them some athletes in the draft, and uh, they need safety help, so, boom.

Scott started in 11 games at offensive tackle in 2021 — 7 at LT, and 5 at RT. He played RT in 2020, and will be the Seminoles' starting LT in 2022. With Andre Dillard highly likely to be in a different uniform in 2023, the Eagles could use a swing tackle who can play both sides of the line. Here he is against Notre Dame last season.

He has some quirky technique oddities that have to get corrected, so he'll be a developmental player, but there is some power and athleticism to work with. Give Jeff Stoutland a year or two to work his magic.

Land was the 2021 Buck Buchanon Award winner, which is awarded to the most outstanding defensive player in the FCS. He had 19 sacks. A look:

He is a slender 225 pounds at 6'4, and is going to have to put on weight in the NFL. In the Eagles' defense, he could project nicely to the SAM linebacker spot.

With A.J. Brown, DeVonta Smith, and Quez Watkins in place and under contract for a while, this year's prospects series will not have a focus on wide receivers for the first time ever. That said, receiver is a position where it's not crazy to keep adding talent when you're already stocked. Downs is a shifty, electric slot receiver, and a fun player to watch.