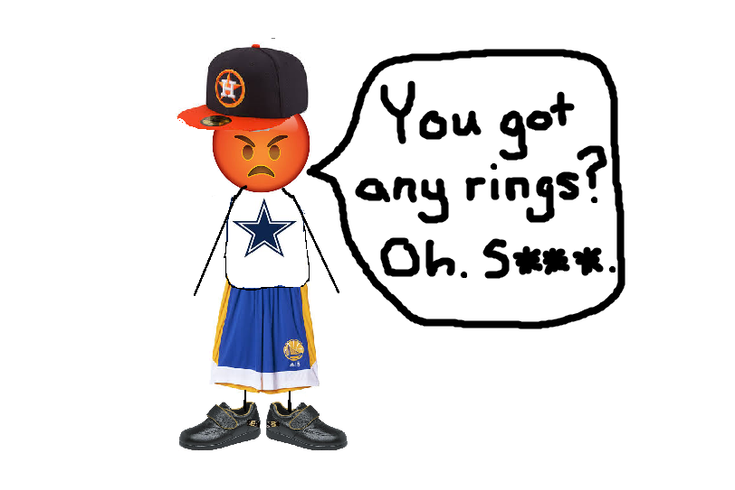 Today was a bad day for the above gentleman.

If you're a long-suffering fan of the Philadelphia Eagles, you've undoubtedly had countless debates with fans of the Dallas Cowboys, New York Giants, and Washington Redskins, over, well, whatever. It doesn't matter, really, because every debate ends the exact same way.

Oh hey, but wait, did the Eagles just win the Super Bowl? They did?!? Oh no! That's gonna suuuuuuck.

Cowboys, Giants, and Redskins fans, I have a prediction. Eagles fans are going to be absolutely insufferable for the foreseeable future. And you'll probably deserve to hear their crap. Here's a sneak preview of some of what you're likely to hear.

Hey guys, your quarterback is nowhere near as good as everyone thought he was after his rookie season. As noted above, he completed like three passes longer than 10 yards down the field last year. Or was it less? Doesn't matter. It's not all his fault. Dez Bryant isn't good anymore, I have no idea what happened to Cole Beasley, you can cover Jason Witten with a DT, and the Cowboys' offensive line is the most overrated thing in sports. The whole thing offensively kind of revolves around a 22-year-old immature dipshit running back who can't stay out of trouble for more than five minutes.

Defensively, Sean Lee has ligaments made of tighty whitey underwear elastic from 1988, and your only good pass rusher had a good season at the worst possible time, his free agency year.

As for the owner's puppet leadership, it's hard to decipher exactly what it is Jason Garrett does, other than clap. It seems that's the answer for literally everything. Gotta keep trusting that process though, after eight years and two playoff wins, or one less than the Eagles' backup quarterback has in the last 22 days.

No no... You're forgetting already. They just got one.

Oh hey there. How'd that 3-13 season taste? Eli is done, and the offensive line stinks. Like the Cowboys, your best player is an immature baby, who, oh, by the way, has a fun contract negotiation on the horizon. It's a good thing the new GM has a history of dealing well with hot head wide receivers. Oh, wait. Anyway, the Giants have to find a quarterback they can only hope is a fraction of what Carson Wentz is, and probably have to completely overhaul the offensive line. That shouldn't be too tough.

The D was good for a hot second, and then it wasn't, and the special teams units were atrocious. Meanwhile, team discipline roster-wide seemed to be a major issue, so the obvious solution was to hire a hardline, no-nonsense, install-fear-into-grown-men stickler like Pat Shurmur.

Also, the Eagles own you. Like, even when the Eagles are bad, they own you. They've won 16 of the last 20 games in this matchup, aaaaaand it's probably only going to get worse.

Yes, yes, I know, the Giants have had recent success too. I guess. That's cool. In a sense, they're like the Phillies. They can point to a ring in the kinda but not really super recent past, which only maybe helps in arguments, but doesn't make them any more watchable on game day.

Anything to say about the Eagles not having won any Super Bowls? Oh right, they literally just did. Nevermind.

Lol, should I even bother? Alright, fine.

Redskins fans know those are the names of all the quarterbacks who have started at least one game in the Dan Snyder era. And finally, after finding a quarterback worthy of being a long-term solution, the Redskins botched the handling of Cousins' contract negotiations to the point where they were almost forced to let him walk in free agency rather than pay him $34.5 million on his third consecutive franchise tag.

The solution with Cousins on the way out was apparently to trade a really good young cornerback still on his rookie deal along with a third-round pick for a weak-armed, soon-to-be 34-year-old quarterback in Alex Smith, who then reportedly received a contract extension worth $70 million in guarantees.

Anyway, I could go on to say the defense still isn't good and whatever else about the roster, but really, who cares? It's been over 12 years since your last playoff win, and over 26 years since your last Conference Championship appearance. Only the Cincinnati Bengals have had a longer drought on the latter.

Sooooooo... Anything to say about no Super Bowls, orrrrrrrrr too busy telling Native Americans what they should and shouldn't be offended by?

Probably best if you all just block any Eagles fan friends in your phone contacts right about now, because they're coming.