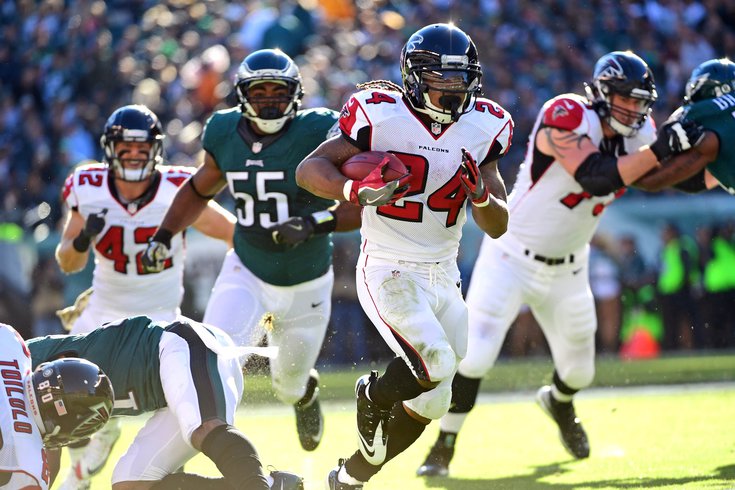 The Philadelphia Eagles will have RB Devonta Freeman in for a visit next week.

The Eagles had previously shown interest in Freeman, but he perhaps overvalued his worth, and remains unemployed into Week 2 of the regular season. It was reported that Freeman had a similar offer on the table that Carlos Hyde signed in Seattle, which he turned down.

Freeman's agent subsequently severed her relationship with him, and he recently signed with Drew Rosenhaus, who many Eagles fans remember negatively from the Terrell Owens days, but who has actually had a very good working relationship with Howie Roseman. In fact, the Eagles' two biggest acquisitions this offseason -- Darius Slay and Javon Hargrave -- are both Rosenhaus clients.

So why now? In Week 1, with Miles Sanders still nursing a hamstring injury, Boston Scott was at least partly responsible for two of the sacks the Eagles allowed. Additionally, as rushers, Scott and Corey Clement both had negative expected yards per carry, per this metric:

Yardage above or below expectation for every ball carrier with at least 5 carries.

Adrian Peterson with the highest avg yardage over expectation, even though he fell short of expectation on about 70% of his carries.

Skewed right distributions can do that to you. pic.twitter.com/se3pwmaEPJ

Sanders will play Week 2 against the Los Angeles Rams, and he says that he is "100 percent, and ready to go," however, his absence exposed the Eagles' need for a backup.

Freeman is a fit for what the Eagles need, if he can regain something close to his pre-injury form.