Overnight earthquake rattles parts of New Jersey; felt in Philly and as far away as New England 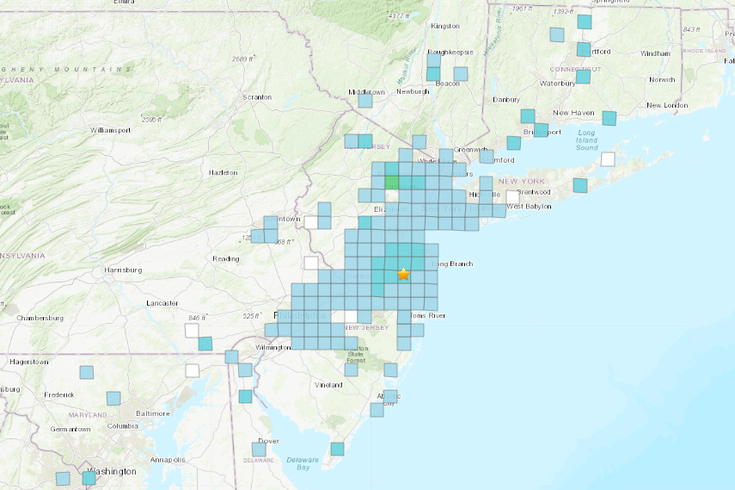 This U.S. Geological Survey map shows the epicenter of the 3.1-magnitude earthquake detected in Monmouth County along with other areas in the region where tremors reportedly could be felt.

The 3.1 magnitude earthquake struck in Monmouth County around 2 a.m., with the epicenter about a mile southeast of Freehold, at a depth of more than 3 miles below the surface.

The USGS received more than 5,000 reports from people who felt the quake and determined it had a "community determined intensity" of 5, on a scale from 1 to 10. This translates to residents feeling moderate shaking and very light damage. There were no reports of any injuries.

The tremor was felt "in much of central New Jersey," according to the Mount Holly National Weather Service. It was also felt in parts of South Jersey and Pennsylvania, including Levittown, Bensalem, and Philadelphia. The quake also registered in parts of New England, including as far east as Boston and as far north as Nashua, New Hampshire. There were even reports in Virginia and Washington, D.C.

A small tremor occurred in the Freehold area around 2:00 AM. It was felt in much of central New Jersey. #njwx pic.twitter.com/A2axmRkv7v

Several New Jerseyans reacted to the earthquake on social media. Some noted the quake tremors woke them up. One user even jokingly noted that they didn't have a "2am earthquake in NJ" on their 2020 bingo card.

I didn’t have 2am #earthquake in NJ on my 2020 bingo card that’s for sure pic.twitter.com/3sZFaT0yHo

Woke up an hour ago to my furniture moving and shaking and found out there was an #earthquake in NJ and that some peeps in LI felt it. I knew I wasn’t that crazy.