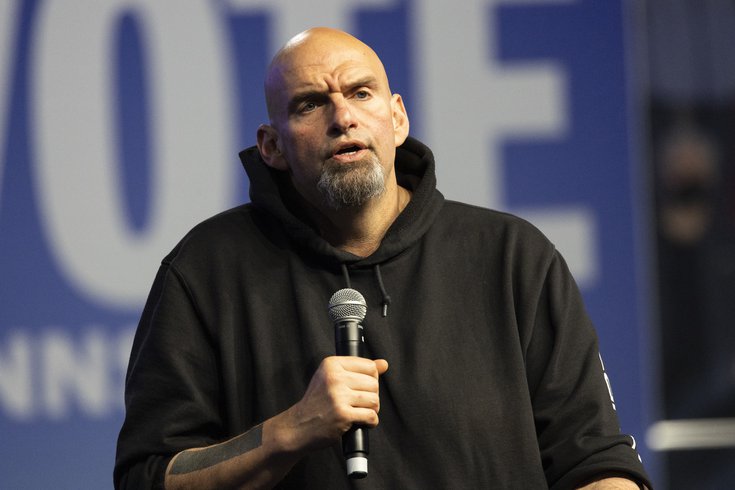 Democrat John Fetterman is projected by the Associated Press to defeat Republican Mehmet Oz in Pennsylvania's race for U.S. Senate. Fetterman is pictured above at a rally at Temple University in North Philadelphia on Nov. 5.

Democrat John Fetterman is projected to beat Republican Mehmet Oz in the U.S. Senate election in Pennsylvania, notching a pivotal victory for Democrats in their push to maintain the Senate majority.

The Associated Press called the race at 12:51 a.m. Wednesday. Fetterman held a slim lead, with 49.92% of the vote compared to Oz's 47.68%. Other outlets also called the race early Wednesday morning. About 85.52% of the state's expected vote had been counted, with a large number of votes still outstanding in heavily Democratic Philadelphia.

Election results are unofficial until certified by the Pennsylvania secretary of state later this month.

Democratic Lt. Gov. John Fetterman won Pennsylvania’s Senate race, defeating Republican Dr. Mehmet Oz in a key pickup for Democrats. The victory gives Democrats some breathing room to keep the Senate majority even if they lose a seat of their own. https://t.co/uy24ytfTxZ pic.twitter.com/ZcfYhSS6vU

As Fetterman took the stage in Pittsburgh to give his victory speech, he was greeted by a large Pittsburgh crowd that chanted his name in the early morning hours.

"We launched this campaign almost two years ago and we had our slogan," Fetterman said. "It's on every one of those signs right now: Every county, every vote. Every county, every vote. And that's exactly what happened. We jammed them up. We held the line. I never expected that we were going to turn these red counties blue, but we did what we needed to do, and we had that conversation across every one of these counties. And tonight, that's why I'll be the next U.S. Senator of Pennsylvania."

Fetterman, the state's lieutenant governor and former Braddock mayor, spent much of the race leading in polls until the weeks after a televised debate on Oct. 25, when the lingering effects of a stroke he suffered in May renewed questions about whether Fetterman had recovered sufficiently to manage the demands of the job.

In one of the nation's most high-profile races, Oz, the retired heart surgeon and TV health guru, appeared to have gained momentum entering Election Day, with a slight polling advantage in early November.

The competition between Fetterman and Oz was often vitriolic. Sparring attack ads from Oz attempted to paint Fetterman as sympathetic to violent criminals, while the Fetterman campaign portrayed Oz as a pathological liar with dubious residency in the state.

Fetterman, who previously ran for U.S. Senate in 2016, campaigned as a progressive defender of working class Pennsylvanians and a champion of long-held pillars of the Democratic platform, from abortion rights to organized labor, affordable health care and safeguards against corporate profiteering. Fetterman also is an advocate for the legalization of recreational marijuana and has campaigned as a politician who can disrupt the status quo in Washington.

Oz's largely self-financed campaign tried to tread a moderate line, frequently denouncing extremism on both ends of the political spectrum. He has been critical of the direction of the U.S. economy under President Joe Biden, singling out efforts to curb inflation and create a robust energy sector as key issues for Pennsylvania voters. Oz also targeted immigration reform as an important step to addressing violent crime and the opioid epidemic, while labeling China a threat to the nation's self-sufficiency.

But on Tuesday, Oz couldn't overcome Fetterman's bona fides in Pennsylvania, where voters seemingly looked beyond the pains of the lieutenant governor's stroke recovery to bet on his everyman charisma in the Senate.

"This campaign has always been about fighting for everyone who's ever been knocked down, that ever got back up," Fetterman said. "This race is for the future of every community all across Pennsylvania, for every small town or person that ever fell behind. For every job that has ever been lost. For every factory that has ever closed. For every person that works hard, but never got ahead. I'm proud of what we ran on."

Fetterman will take over the seat of retiring Republican Sen. Pat Toomey, who is completing his second U.S. Senate term. Heading into the election, the composition of the U.S. Senate was split evenly with 50 Republicans and 48 Democrats, plus two independents who caucus with the Democrats. The tie-breaking vote for Democrats is held by Vice President Kamala Harris.

The outcomes of six of the nation's tightest Senate races — in Pennsylvania, Nevada, Wisconsin, Arizona, New Hampshire and Georgia — are likely to decide the balance of power in Congress after mid-term elections that most political observers predicted would flip the House of Representatives to a Republican majority. House Republican Leader Rep. Kevin McCarthy, of California, celebrated early Wednesday morning, proclaiming the GOP's newly won control.