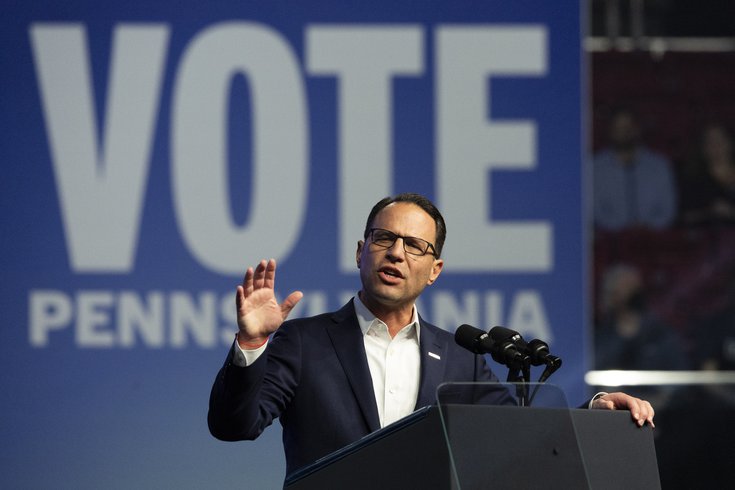 Democrat Josh Shapiro defeated Republican Doug Mastriano to win the Pennsylvania governor race on Nov. 8, 2022. The photo above shows Shapiro at a campaign rally at Temple University days before the election

Josh Shapiro won Tuesday's election to become the 48th governor of Pennsylvania, cruising by far-right Republican candidate Doug Mastriano to win a race with the potential to shape the future of abortion rights, voting access and criminal justice reform in the state.

The Associated Press projected Shapiro to be winner the election at 12:16 a.m. Wednesday. About 90 minutes later held a sizable lead with 55.23% of the vote to 42.97% for Mastriano.

Election results are unofficial until certified by the Pennsylvania secretary of state later this month.

Other new outlets had predicted Shapiro's win late Tuesday night, prompting him to deliver his victory speech to a crowd of supporters in Montgomery County

He continued, "Tonight, you, the good people of Pennsylvania, you won. Opportunity won. A woman's right to choose won. The right to organize here in Pennsylvania — that won. Your right to vote won. And in the face of all the lies and conspiracies and baseless claims, you also ensured tonight that truth won, right here in the Commonwealth of Pennsylvania."

Shapiro, 49, has served as Pennsylvania attorney general since 2017. He has cracked down on the proliferation of ghost guns, supported a federal rule requiring background checks for purchases of gun parts, and played a role in negotiating the $1 billion Pennsylvania received from the national opioid settlement with pharmaceutical distributors.

Shapiro has vowed to veto any anti-abortion bill that comes across his desk as governor. He supports implementing automatic voter registration, same-day registration for voting, and enacting early voting across the state in order to expand access. He also plans to cut costs for families by distributing $250 gas-tax refunds for every personal vehicle registered in Pennsylvania, eliminating the state's cell phone tax, and making 275,000 more people eligible for the Property Tax and Rent Rebate system.

Born in Kansas City, Missouri, Shapiro was raised in Drescher, Montgomery County. He attended school at Jack M. Barrack Hebrew Academy, a Jewish day school in Bryn Mawr, and while there, started a group to support Jewish families attempting to emigrate from the Soviet Union.  It was an experience that he has said influenced his political career.

Shapiro served as the state representative of the 153rd District from 2005 to 2012 before being elected to the Montgomery County Board of Commissioners from 2012 to 2017. He was on board when Democrats took back the majority for the first time since the Civil War.

Mastriano, 58, a state senator and retired Army colonel, was elected to the legislature in 2019 after an unsuccessful run for U.S. Congress in 2018. He gained attention across the state in 2020 for his frequent criticisms of Gov. Tom Wolf's COVID-19 mandates and his refusal to accept the results of the 2020 presidential election. He later testified to the U.S. House's Jan. 6 committee, but he did not answer questions.

Mastriano received a last-minute endorsement from former President Donald Trump prior to the primary election. He supports a ban on abortions after a fetal heartbeat can be heard, a cause he has championed as a lawmaker. He also supports eliminating mail-in voting, removing local elected officials who do not prosecute crime to his standards, and establishing constitutional carry throughout Pennsylvania, which would allow people to carry firearms without permits.