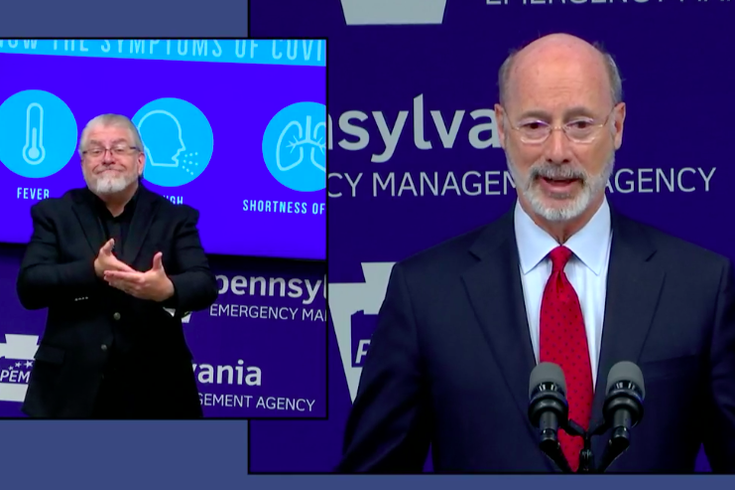 He also extended his stay-in-place order affecting 26 counties, including those in the Philadelphia region, through April 30. That falls in line with the social distancing recommendations issued Sunday by President Donald Trump.

Wolf initially ordered all non-life-sustaining businesses to close for two weeks beginning on March 19. Schools have been closed since March 16. And the Philadelphia region has been under stay-at-home orders for about a week.

"We're going to keep our schools and businesses closed as long as we need to keep them closed to keep Pennsylvanians safe," Wolf said during a virtual press conference. "Right now, it isn't safe."

Still, Wolf acknowledged that Pennsylvania is seeing some encouraging signs. The health system is not overwhelmed and one model predicts it will withstand a surge in COVID-19 cases. But that depends on maintaining such restrictions.

It's still too early to determine whether the state's infection rate is flattening, state epidemiologist Dr. Sharon Watkins said.

Pennsylvania has 4,087 confirmed COVID-19 cases, including 693 new cases announced Monday. There have been 48 coronavirus-related deaths. Chester County reported its first fatality – an 89-year-old Willstown Township man, who died after being hospitalized.

"This virus is really sneaky," Wolf said. "Someone can be carrying it for two weeks without showing any symptoms, whatsoever. You don't know who has it. You don't know if you have it. So we must all act as if we do have it."

Wolf pushed back against the calls of State Sen. Doug Mastriano, who is pushing for businesses to reopen if they adhere to the U.S. Centers for Disease Control and Prevention's mitigation guidelines.

"The closure order impacted tens of thousands of businesses, millions of jobs and puts at stake the economic well-being of our citizens," said Mastriano, whose district covers portions of Adams, Cumberland, Franklin and York counties. "There is a real and present danger that the cure may in the end be worse than the virus."

Wolf, a Democrat, rebuked that idea.

"We're trying to make sure that Pennsylvanians are safe – employers and employees alike," Wolf said. "To the extent that we can keep people from congregating and coming together in businesses, anywhere, we're actually bending the curve and buying time so that we can get to the point where our health care system can accommodate the demand for services.

"What we don't want is what happened in Italy, where the death rate is over 11% at this point. We need to make sure that what happened there doesn't happen to us."

Most businesses immediately complied with his shut-down order, Wolf said. Others closed after being warned by state police. No citations have been written, Wolf said.

Wolf said his administration is developing a plan to help businesses eventually reopen. It will include ensuring businesses have the liquidity they need to resume operations and measures to assist workers who have been laid off or furloughed by the coronavirus pandemic.

The plan will be released in the next couple weeks, Wolf said.

"We understand that this isn't going to happen with the snap of a finger," Wolf said. "We're going to have a reasonable and detailed plan to provide the support the businesses are going to need to get back on their feet as quickly as possible."