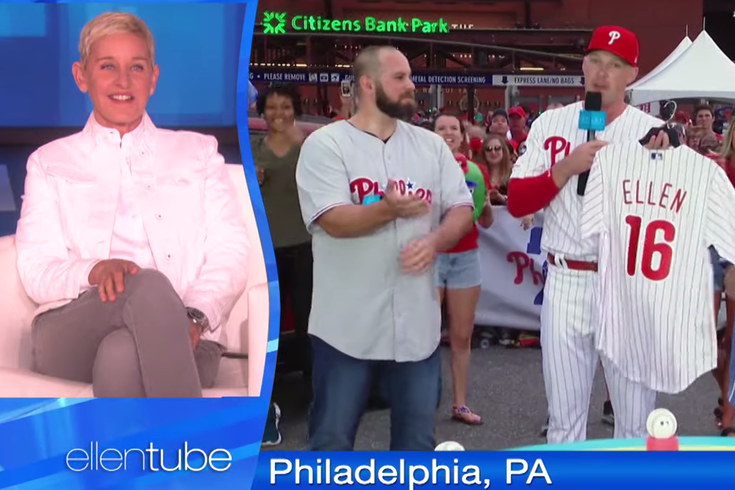 The weather in the Philadelphia area has been, shall we say, less than ideal for most of the week.

That hasn't stopped Phillies fans from turning out to Citizens Bank Park for several home games that were threatened by severe weather.

As we pointed out last week, Ellen DeGeneres sent her crew to South Philadelphia on Wednesday afternoon to hold a contest ahead of the Cardinals game that night. Wednesday brought some of the worst of the week's storms, including confirmed tornadoes in Pennsylvania.

By the time Ellen's event got underway on Wednesday, practically the whole state was under a tornado watch — including Philly.

But the show went on. Ellen recruited Phillies star Rhys Hoskins and former Eagle-turned-magician Jon Dorenbos to help conduct a game of "Not Blinded Musical Baseballs" (really has a ring to it, Ellen...). The winner of the game won a brand new, red Chevy Blazer.

Here's how it all went down.

What a tough break for the guy who lost his grip on that winning cup. He was aggressive the whole game, played his close-to-the-table, dislocate-your-arm strategy with no shame, only to lose his grasp on a new car. Congratulations to the woman who came out victorious.