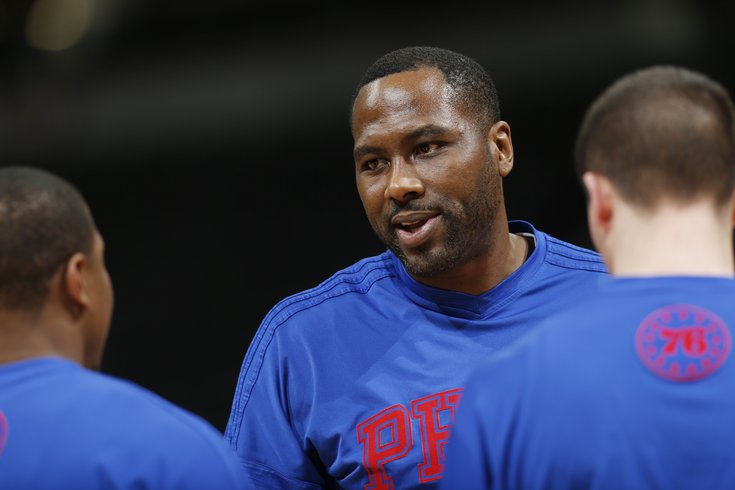 Philadelphia 76ers forward Elton Brand during a game in March.

Elton Brand long ago learned an important lesson about what to say — and what not to say — from none other than Tim Duncan. He did so during their many on-court matchups over the first half of Brand’s career, when he was starring for the Bulls and Clippers and Duncan was still in his prime with the Spurs.

“This is during the trash-talk era,” Brand said.

Only thing is, Duncan wouldn’t do any of that. He’d engage Brand in friendly chit-chat – ask him about his family, etc.

No chance. Duncan knew that would only rev Brand’s engine, so he killed him with kindness – that, and his usual array of bankers and jump hooks.

Duncan retired this summer. So too did Kevin Garnett, who never stopped yakking on the court – though as Brand pointed out, it wasn’t always directed at opponents.

“He’d be barking and talking to himself,” he said.

Kobe Bryant hung ‘em up as well. Brand used to share a building (the Staples Center) with him, though the Clippers often played “the JV game,” as Brand put it, before Bryant’s Lakers came out and did their thing.

All three are Brand’s contemporaries, if not quite his peers. They’re headed for Springfield. He’s headed to training camp this week, trying to make the Sixers at age 37 as a backup forward, trying to extend his career to an 18th season.

Anything he gives them on the court is a bonus, of course. He is here to mentor a young team, particularly the young bigs.

Because he leads. Because he knows what to say, and what not to say.

Case in point: He pulled Nerlens Noel aside weeks before he criticized the front office for not doing anything in the offseason to alleviate the logjam at center, and indeed weeks before Brand signed a one-year, $1.5 million make-good contract with the team.

“My opinion was, be around the group, develop with the group, because anything else is not going to bode well for him,” Brand said. “He’s not holding the best cards right now. You need to be part of the system, part of the group, so give your best effort and let the chips fall. Don’t be an outsider.”

He is used to the big-brother role, and it is doubtless the reason he keeps getting hired, even with his career on the downslide. It’s why, after a previous four-year run with the Sixers (2008-12), Dallas and Atlanta were only too happy to have him seated on the end of their benches.

Hawks coach Mike Budenholzer called Brand “one of my favorite people” and “one of the finest human beings I've ever been around” after the Sixers re-signed him in January, after it appeared his playing days had come at an end.

"Everybody's been talking about him being a mentor here," Budenholzer said then. "I think he mentored me in some ways, for a couple years."

He was brought back, more than anything, to babysit rookie center Jahlil Okafor, who had been involved in a handful of well-publicized dust-ups off the floor.

“He has a huge influence,” Okafor said on Monday “Even last year, when he wasn’t playing, his presence in the locker room was always felt, and now that he’s back on the court it is a new life in the gym, and it’s so refreshing to see him back on the court.”

When the Sixers broached the idea of a return over the summer, Brand, who maintains a home in the area, said he was trying to stay in “cool-dad shape” by riding his bike, always his favorite mode of conditioning.

But the guy often referred to as “Old-school Chevy” still believes he has something to offer, and still has his pride.

During a media day news conference Monday, a reporter said Brand sounded like a coach with the things he was saying. Brand immediately turned to guard Sergio Rodriguez, one of the team’s newcomers, who was seated next to him at a table in the front of a crowded conference room.

“The only day I actually played, he won every game,” Rodriguez said.

“I knew you were there that day,” Brand said. “Some days I didn’t win a game, but I try to play the right way.”

That has value in itself.

Brand, the top overall pick out of Duke in 1999, was mentored his rookie year by Bulls veterans like Randy Brown and Dickey Simpkins, holdovers from the Jordan years. They taught him how to act like a professional, how to take care of his body and the like.

“It always stuck with me, but I didn’t apply it as much,” he said.

In fact, he wrote in a first-person story that appeared on SI.com’s “The Cauldron” in January, he “barely even tried” to lead as the early part of his career unfolded.

He was a consistent 20-and-10 guy then, albeit on lower-tier teams. But he learned. He grew. And finally, he led.

As he wrote in that Cauldron story, "It's about repaying what's owed, about making sure that the young men who follow in my footsteps get what they're entitled to (and what I haven't always given them)."

He arrived in Philadelphia as a free agent in 2008, just as his career had reached a crossroads. He had shredded an Achilles the previous season, and was nearing the age of 30.

If the Sixers didn’t see the best of him over the next four seasons, they saw the best he had to offer. He sank elbow jumpers, worked the glass, served as a de facto enforcer. He also made his corner of the locker room a vibrant one. He was always available, to teammates and reporters alike. (The latter is part of being a pro, too.)

Brand said that in the years since, he has heard from ex-Sixers like Andre Iguodala, Lou Williams and Spencer Hawes, all of whom have reached out and thanked him for his influence.

He can only hope to have the same impact now, on players far younger, far more impressionable.

That they are listening to what he is saying, and what he isn’t.