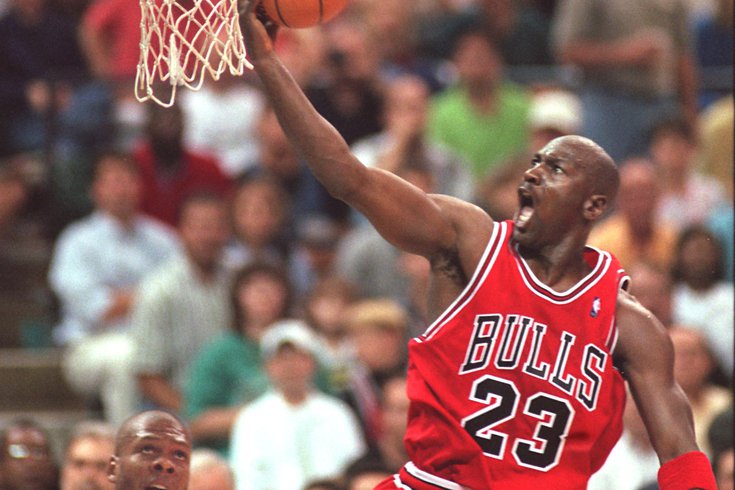 From the loss of his father to spiteful trash talk in pickup games, night four of The Last Dance was perhaps the best yet, marrying the behind-the-scenes habits of Michael Jordan with his legendary career. It wasn't always pretty, but it came with a purpose, and these episodes set us up perfectly for the final episodes next week, the last seasons of Jordan's Bulls career.

Here were some of the standout moments.

This is the uncut Michael Jordan I wanted from the very start of the documentary. The guy who accosts teammates in practice, still inspires a bit of fear as they sit down for present-day interviews, and punched Steve Kerr in practice for not living up to the standard. That's who the public didn't always get to see when he was smiling for McDonald's and Gatorade ads.

A recap of some quotes and anecdotes from the two latest episodes that jumped out:

That last anecdote is notorious but there were nowhere near enough of these stories and clips the first three weeks. Being a vindictive, spiteful competitor does not come without accosting some people close to you, and even some strangers too. On night four, we finally started to get closer to the subject.

"Winning has a price and leadership has a price," Jordan said in episode seven. "I challenge people when they don't want to be challenged."

There is an ugly side to being obsessed with anything, let alone sports. It consumes your time, your mind, and often your ability to empathize with other people. But we often strip most of that away get when we look back on great athletes and do nothing more than reduce them to their achievements on the field/court/rink. They're more interesting and complicated than that, and learning how that touches the lives of the people around them is often the most compelling story of all.*

*That we haven't heard anything from Jordan's sons yet is, well, interesting in that respect.

That's not to say this was without method, or that Jordan was just an asshole for the sake of being an asshole. The most revealing moment in the two hours of television Sunday was Jordan breaking down and starting to cry as episode seven reached its conclusion, describing why he pushed his teammates the way he did and what he hoped to get out of them. He demanded more of them because he continued to demand more from himself.

"Ask my teammates," Jordan said, "and they'll tell you, he never asked me to do something that he didn't fucking do."

I would sit through an entire documentary series on practices with Jordan alone. I am grateful this stuff made the final cut.

Michael Jordan was growing weary with the cost of fame and being a champion as he neared the end of the first three-peat in 1993, as showcase during last week's episodes of The Last Dance. But seeing what he and his family would have went through following the disappearance and death of his father that summer, it's easier to understand why Jordan walked away from the sport at the peak of his powers.

The relationship between the two men was much more than a typical father-son relationship. Throughout episode seven, Jordan described him as a friend and a peer in adulthood, rather than his superior, and the loss of one of his closest confidants shook him to his core. Reporter Ahmad Rashad recalled a moment before the funeral where he actually had to tie Jordan's tie for him because he was so distraught, a striking moment for a man who has been publicly invincible (outside of the well-known crying meme).

Forget losing your father to a senseless death, imagine your father being murdered and then having it blamed on you with speculative articles and newscasts about a connection to your gambling. More dubious members of the press exploited the tragedy as a way to tie the world's No. 1 sports brand into their story, forcing the man himself to address the speculation eventually.

Think about the above dichotomy for a moment. One of the most prominent NBA reporters on the planet was by his side during his father's funeral, while others sat at home and never thought to talk to Jordan himself about the accusations. Rashad getting as close as he did to Jordan feels like it would be impossible to achieve today.

It's especially tough when you don't take the time to talk with the guy. After Sports Illustrated trashed him for his baseball career without interviewing him, he refused to conduct interviews with them moving forward, which seems like a fair bit of policy. Too often this is what the divide looks like between members of the press and people they cover. Either you're not interested in hearing their side, or you're caught within their orbit and too friendly to be critical.

The elder Jordan's loss, by the way, became even more poignant when Jordan honored his father the only way he knows how — by completing the quest for his fourth NBA championship on Father's Day in 1996, nearly breaking down in front of the mic in the moments after the win. That is the other side of Michael Jordan away from basketball. It wasn't all mean-spiritied barbs.

The 1994 Bulls could have their own documentary

The 1994 Bulls season is a fascinating piece of history. Without Jordan, they managed to win 55 games and push the Eastern Conference team that went to the Finals to seven games without homecourt advantage.

But they are infamous for Scottie Pippen's meltdown in Game 3 of the Eastern Conference semifinals, when he refused to take the floor because Phil Jackson put the ball in the hands of Toni Kukoc for the final shot. Here's the funniest part about it — Kukoc made the damn shot and the Bulls won the game. And his teammates were happy to remind Pippen of that fact, inspiring him to break down in the locker room crying and apologizing after the win.

There were some dubious exclusions from the stretch on the 1993-94 Bulls, including from that same series. Hue Hollins' foul call in the waning moments of Game 5, a moment that decided the game and by extension the series, lives on in NBA history but not in this documentary. Without that call, it's possible the Bulls would have gone on to beat the Pacers and make another appearance in the NBA Finals — after all, the Bulls won eight more games than the Pacers in 93-94 and beat them in four of their five meetings. Additional focus on that team would have been welcome, as well as what it says about Jordan's team accomplishments through 1993.

(Of course, the caped crusader came back and they three-peated again from 96-98, so it crushed any talk of how good they were even with Jordan playing baseball.)

The other shame of this for me has been Toni Kukoc only getting the spotlight as a means to revisit some petty grudge or slight Pippen or Jordan felt at the time. As the montage of buzzer-beaters showed, Kukoc was a high-level contributor in his own right and earned his place as one of the members of the "Unstoppabulls."

Yes, this was already covered in a standalone documentary, but the insanity of Jordan's baseball career isn't talked about enough. The man took a near 15-year hiatus from a sport only to be dropped into AA, where real prospects tend to separate themselves from the pack, and he managed to hit over .200? Sure, that's not good for a future pro, but that's a remarkable achievement in the circumstances. Their whole excuse for sticking him there in the first place was to make sure they were able to accommodate the media that covered him at the time, and Jordan managed to play just well enough not to drown.

It's not surprising that the same anecdotes about hard work followed Jordan to baseball. Blisters on his hands from batting practice, re-training his body for a different sport, and committing his focus to a team in Birmingham, Alabama after being at the top of the sports world is a hell of a thing. But that was Jordan.

The real question here is whether Jordan would have made it to the pros with more time and commitment if not for baseball's strike. He managed to hit .252 in the Arizona Fall League in late 1994, which again, is a staggering accomplishment for a guy who had never played professional baseball at any level before then.

"Starts with hard work, ends with champagne," Jordan told his teammates during footage from right before their 1998 series against the New Jersey Nets. That seems like a good enough summary of the fourth night of The Last Dance. If you put in the time to be great with Michael, you were with him all the way to the top.

It's a shame that Sonics team didn't have more longevity, because I could listen to "The Glove" talk about hoops for as long as he wants.

George Karl not putting him on Jordan until Game 4 of the 1996 Finals was an absolute crime against humanity, by the way. What a doofus.