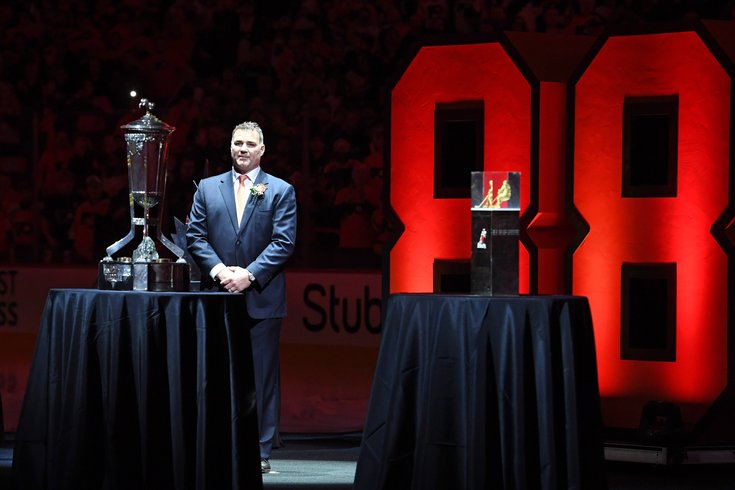 Eric Lindros has his number retired during pregame ceremony against the Toronto Maple Leafs last month.

Everyone who saw it will never forget it.

Flyers’ superstar Eric Lindros had just entered the New Jersey Devils’ zone when, seemingly from nowhere, Devils’ defenseman Scott Stevens laid an anvil-like shoulder on Lindros’ chin, sending him to the ice curled in the fetal position about eight minutes into Game 7 of the NHL’s Eastern Conference Final, as a dark hush enveloped what was then the First Union Center (now the Wells Fargo Center).

Though it happened on May 26, 2000, Lindros lives with that resonating hit every day. It led to Lindros’ sixth concussion in two years, and it eventually truncated a Hall of Fame career Flyers’ fans, regrettably, saw only a portion of.

Tuesday night (10:00 p.m. ET) on HBO’s "Real Sports," Lindros, whose No. 88 was retired by the Flyers on Jan. 18, plays a significant role in a scathing report criticizing how the NHL treats concussions.

The report, done by David Scott, makes NHL commissioner Gary Bettman look like a dullard when it comes to treating concussions.

While “every other sport in America has acknowledged the risk of head injuries …  from soccer … to lacrosse… even the NFL… whose years-long denial of ITS head injury crisis inspired everything from congressional hearings… to Hollywood movies,” the report says, the NHL has refused to budge when it comes to brain trauma to its players.

Like the NFL, the NHL is now undergoing a growing number of former players who are being diagnosed with Chronic Traumatic Encephalopathy, or CTE.

The report delves into the sad story of 10-year NHL veteran Steve Montador, who died at the age of 35 after suffering what was believed to be 19 concussions. An autopsy revealed that Montador suffered from CTE, a progressive degenerative brain disease found in people with a history of repetitive brain trauma, which causes memory loss, depression, dementia, and is often associated with substance abuse.

CTE was believed to be the cause of death to former NFL stars Junior Seau and Dave Duerson, who both died from self-inflicted gunshot wounds to the chest.

I was furious because here I went from being a really good player to being just a shadow of myself... I wanted nothing to do with the game.

Lindros is trying to address the concussion issue with the NHL. So far, it’s fallen on deaf ears.

Lindros, who played the first eight seasons of his 13-year Hall of Fame career with the Flyers, candidly admits how multiple concussions altered his game — and eventually his behavior, with chronic headaches and hatred of crowded places.

After the Stevens hit, Lindros was never the same player.

“I was furious because here I went from being a really good player to being just a shadow of myself,” Lindros admits.

And after he retired, “I wanted nothing to do with the game. I was sour. I was angry,” he said.

On the day he announced his retirement (November 8, 2007), Lindros donated $5 million to the London Health Sciences Centre, which aided him with his multiple concussions. Lindros, and Hall of Fame Montreal Canadiens goalie Ken Dryden, have made appeals to the NHL to help deal with head injuries to NHL players.

Bettman’s response, “I think it’s fairly clear that playing hockey isn’t the same as playing football. And as we’ve said all along, we’re not going to get in a public debate on this.”

The NFL has a five-step concussion protocol procedure, which involves a player being “removed immediately from the field,” and evaluated by the team doctor and “unaffiliated neurotrauma consultant” who will review the video of the play, examine the player and determine whether or not that player is able to return.

After Sidney Crosby suffered his third concussion in October 2016, the face of the game was out indefinitely. In a report published by The Atlantic on Oct 12. 2016, the NHL implemented a new system in which “the league will employ a staff of certified athletic trainers to act as spotters for potential concussions. Spotters will both be at games and at NHL headquarters in New York watching live broadcasts remotely. If spotters see signs of concussions, they can tell teams to remove players from the game. Players can return only after the team’s medical staff clears them. If teams do not cooperate, the league will impose sanctions and fines.”

Yet, as the report points out, these “spotters” are ineffectual.

A disturbing "Real Sports" clip shows a Tampa Bay Lightning player getting crunched against the boards and crumbling to the ice — only to return later to the game. The concussion issue has caused over 150 former players to file a class action lawsuit against the NHL, which essentially states that the league did not do enough to ensure their protection from concussions. Some former players already state that they’re suffering from CTE. Others in the law suit state that they were not properly taken care of by team medical staffs — and some say they suffered concussions and were sent back out to the ice.

While the NHL seems to be lagging poorly behind the other major professional North American sports when it comes to dealing with concussions, Lindros keeps pushing for change. He and Canadiens’ team doctor David Mulder asked the NHL to fund research in protecting players. They proposed the NHL, which is a $4-billion entity, ask each team for $1 million toward that goal.

Neither Lindros or Mulder heard back from the NHL. Neither did Paul Montador, Steve’s father.

The report is compelling, disturbing in its portrayal of a major sports league’s continued ignorance about a life-altering matter, and hopefully forceful enough to make the NHL awake from its seemingly concussed state when it comes to treating concussions.