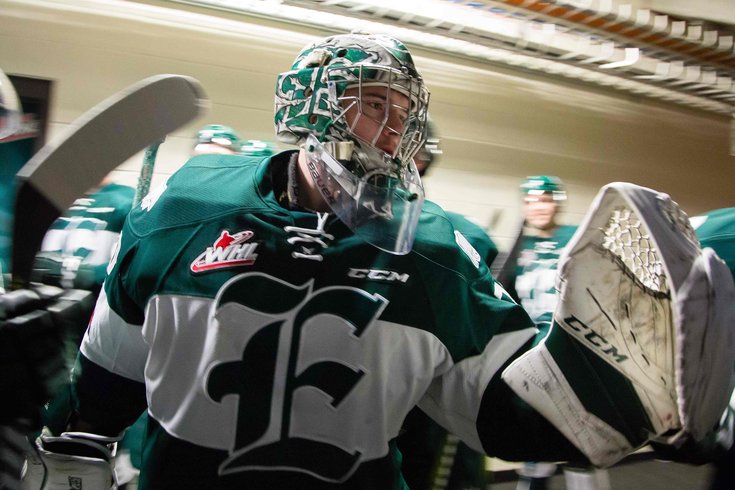 When will Carter Hart trade in his green uniform for Flyers' orange?

Carter Hart’s cage hid his reddened face. His eyes were narrow and rigid, as he stared ahead at the open gate, not bothering to look at anyone. He didn’t want to talk anyone, either.

Hart’s skates could have melted ice; the Everett Silvertips’ goalie was that furious.

He was the last one to stride off the ice, as usual. He looked over his left shoulder, and then his right, making sure no one followed him, finding a private place where he could be alone in the warrens of the ShoWare Center, in Kent, Washington, last April.

That’s when Hart proceeded to smash his stick into splinters.

You see, Carter Hart doesn’t like to lose. He plays by a simple creed: No one scores on him — not even in practice. So, when the Silvertips lost to the Seattle Thunderbirds in the second round of the Western Hockey League’s 2016-17 playoffs, Hart broke a longstanding promise to himself and his dad that he wouldn’t break another stick in anger.

That passionate attitude is coming to Philadelphia — possibly sooner than some think if Hart has anything to do with it.

Hart, 19, is one of the best young goaltenders in the world. The 6-foot-2, 185-pounder from Sherwood Park, Alberta, Canada, was the Flyers’ 2016 second-round pick. He led Team Canada to this year’s World Junior Championships, in Buffalo in January — and now he’s working on leading Everett to a WHL championship.

He hasn’t played a game in orange and black, yet it’s very easy to see his face placed on the youthful Philadelphia sports Mount Rushmore pantheon with Carson Wentz, Joel Embiid and Rhys Hoskins.

And aside from last year’s playoff outburst, Hart is pretty calm — certainly far more in control than when he first was introduced to the goalie position when he was 9. He’s intelligent, mature, and likes to pattern himself after Montreal’s Carey Price and Washington’s Braden Holtby, two highly successful even-demeanor netminders.

Hart just has a sordid history with sticks.

“I would say I go through about 15 to 20 sticks a year, but that’s through wear and break,” said Hart, who leads the WHL with a 1.53 goals-against average, a .951 save percentage, seven shutouts and a 22-4 record. “When we lost out to Seattle in the second-round last year, I was pretty pissed off and disappointed. I remember I broke a stick in the hallway away from everyone.

“Then I called my dad to let him know I did it again. Before then, I don’t even remember the last time I broke a stick in anger.”

The day he got cut really, really lit the fire... He didn’t understand it at the time. He didn’t want to talk to anybody... It’s when he began taking his game to another level.

That says competitor. It says Hart has quite a bit in common with the guy who drafted him, Flyers’ general manager Ron Hextall, who was as fierce as any player who skated.

Flyers’ fans can’t wait for him to arrive. They want Hart in orange and black yesterday.

They got a taste when he made 35 saves in Canada’s 3-1 World Junior gold-medal victory over Sweden. He closed the tournament with a 1.81 GAA, a .931 save percentage and nods of approval from Hextall.

“Carter has a mature game, and he’s improved since last year,” Hextall said. “He came into a pressure situation and handled it well. He’s seeing things really well. I definitely liked what I saw.”

Carter Hart was drawn to becoming a goalie because he liked the equipment goaltenders wore. Hart, whose grandfather, Arthur Hart, has a Philly connection playing in the 1960s for the old Philadelphia Ramblers of the EHL, was 9 and apparently there were a lot of sticks broken. He struggled early, and around the age of 10, Hart began seeing a mental coach, John Stevenson, a sports psychologist who also counsels Holtby and was once Hart’s goalie coach.

“John has been a big part of Carter’s career and I think that’s when things began turning around for Carter,” said John Hart, Carter’s father. “Carter would go through 10, 12 sticks a year, breaking them over the crossbar. I had a few conservations with him and told him the next one he breaks will coming out of his allowance. 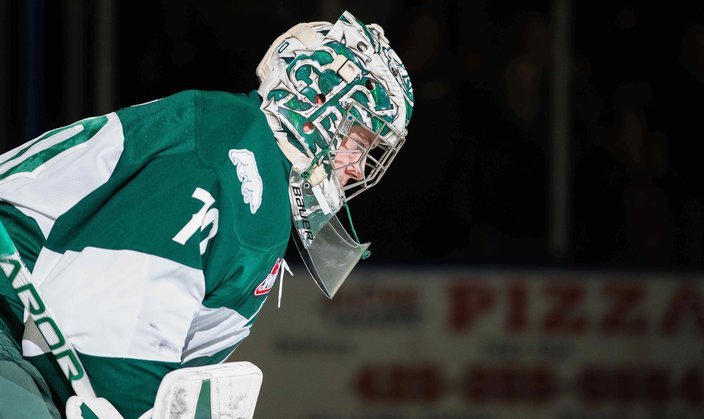 Wins and losses used to be brought home with him. Each time Carter would climb into the Hart's black Tundra, his eyes would give up his emotions. They would well with tears when he lost, and he would beam when he won.

John and Carter would break the game down in the Tundra cabin. The discussions would sometimes get heated. John never held back.

“Carter always looked me in the eyes and he never looked away,” John said. “There were times he would let a soft one in, and I know it’s the nature of the position. If you’re not giving a 150-percent for a full 60 minutes, bad things are going to happen. There were times I would tell him, ‘You have to pull your head out of your ass.’ We had that conversation more than once, but you could see that fire in him. I would see a tear in his eye and it was hard seeing that. And now you see him, it’s been amazing.

“Even today, Carter will look anyone in the eyes when he speaks to them. It’s amazing the accomplishments Carter has achieved, and I don’t like pumping my children’s tires. I’m proud of him. Everything Carter has done he’s done on his own.”

What set Hart’s development to a greater stage came when he was cut from the Midget AAA Sherwood Park Kings, which includes players from the ages of 15 to 18. Carter was the youngest on the team and, at just 15, he was the last player cut. He met his father John in the hockey rink lobby with tears streaking down his face.

John knew it wasn’t good. Carter told his father, “Dad let’s get in the truck.”

“I’ll be honest, that’s the most devastated I ever saw Carter, and he should have made the team,” said John, 54, who is the father of two and is in the oil and gas industry. “They told us they wanted to go with an older, more experienced goalie. The day he got cut really, really lit the fire. I remember looking back telling him that that was the best thing that ever happened to him. He didn’t understand it at the time. He didn’t want to talk to anybody. He stayed in his room for a few days. It’s when he began taking his game to another level.”

The next year, Hart was drafted in the WHL, after he played Minor Midget AAA and was MVP of the league. He was on a bus coming home from school when Everett called to tell him he was drafted. He was 15 playing against young men — and stopping shots.

And he hasn’t stopped since.

There is a sense with Hart that his aim is to be on the Flyers next season. Currently, he has his commitment set on Everett, which has been a home away from home for him. But Hart doesn’t want to put a timetable on his arrival with the Flyers.

Hextall has let the family know he wants the young goaltender to go through the process and get as much experience as possible. Brian Elliott is locked into a two-year deal, and Michal Neuvirth has been a capable backup, when healthy.

“If you want to be the best, pressure comes along with that, and pressure really is what you put on yourself, and for me, I want to be the best I can be,” said Hart, who will wear No. 79 as a Flyer when he gets here, and also to uphold a seven-year-old Silvertips fan named Conor who had a Flyers’ No. 79 Hart jersey made up. “I’m in Everett right now playing for the Silvertips and that’s where my priority and focus is. To be honest, I haven’t thought about the NHL this year. I have a team to play for right now and a championship to win here.

There are still about eight or nine of Carter’s old broken sticks in the Hart garage. His father kept them around for reminders.

Today, the rare times Hart feels compelled to smash a stick, the public won’t see it. And lately, there haven’t been any reasons why. 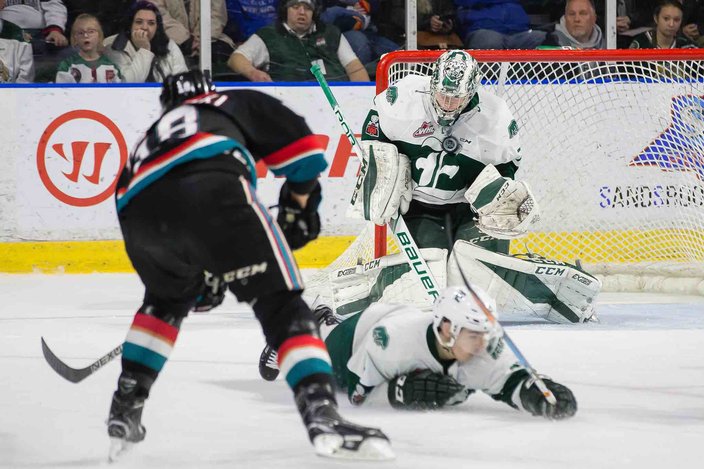 Carter Hart makes a stop during a recent Silvertips game.