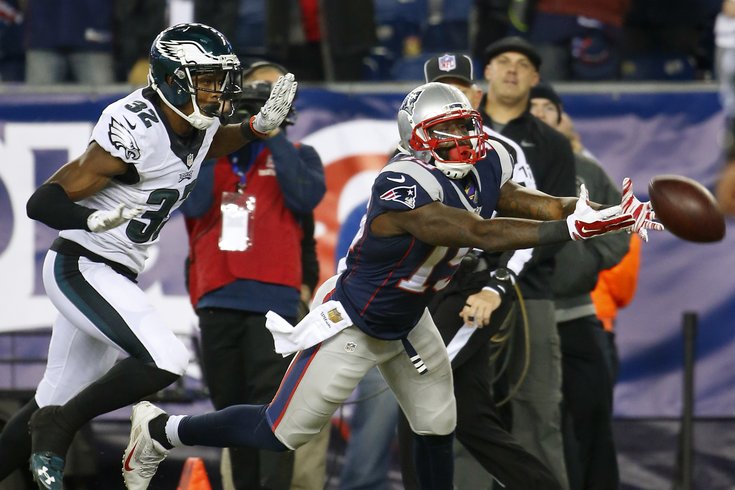 During 2013 training camp, the New England Patriots visited Philadelphia for joint practices with the Eagles. During that trip, Tom Brady found a cornerback in Curtis Marsh that he was going to pick on, and he was relentless, completing pass after pass after pass on Marsh to a wide assortment of receivers.

During the 2014 preseason, the Eagles traveled to Gillette Stadium and Brady once again picked on Marsh, who was having a good camp, this time during the preseason game, to the point where that game likely got Marsh cut.

That's what Tom Brady and Bill Belichick can do -- They can find something on your defense they think they can exploit, and they'll attack it without mercy. Belichick and Brady are basically the Cobra Kai sensei and Johnny from The Karate Kid.

On Sunday last week, a big part of the Patriots' game plan seemingly was to attack Eric Rowe, only Rowe didn't cooperate.

Three of those four completions on Rowe were dinky little five-yard sideline routes that Rowe cleaned up with immediate tackles after the completions. The only real shot down the field completed on Rowe was 20 yard comeback in which Brady had all day to throw.

More impressively, it seemed like whenever Rowe gave up any kind of separation at all, the ball came him way. In other words, on the plays where Rowe was not targeted, he was on his assignment like glue.

A few of Rowe's highlights from the game:

Here was Rowe's near-pick. You can see he tried to drag his back foot (and he actually may have), but certainly there's nothing conclusive here. Still, this was a better effort than it appeared in real time:

Here Rowe is lined up against a receiver in the slot, all the way to the left of the screen. Rowe's anticipation on this play is outstanding, as he makes his break on the ball at the same time as the receiver. He forces a pass breakup, and the ball deflects into the air. You'll often see plays like this result in interceptions by the safety:

Here's Rowe delivering a hit on a running back immediately after a reception:

This was the play immediately after Kenjon Barner's late fumble. The Pats went for the jugular, but Rowe had great coverage on a go pattern with no safety help.

And finally, on fourth down of the Pats' final drive, Rowe gave up a little bit of separation, but was able to pop the ball out after the receiver had the ball in his hands. Very good recovery:

A week ago, after Rowe struggled with arguably the most physically gifted receiver in NFL history in Calvin Johnson, Brian Baldinger of NFL Network tweeted that Rowe can't play in the NFL: