Kelly: Eagles botched McCoy trade and he 'should be pissed' 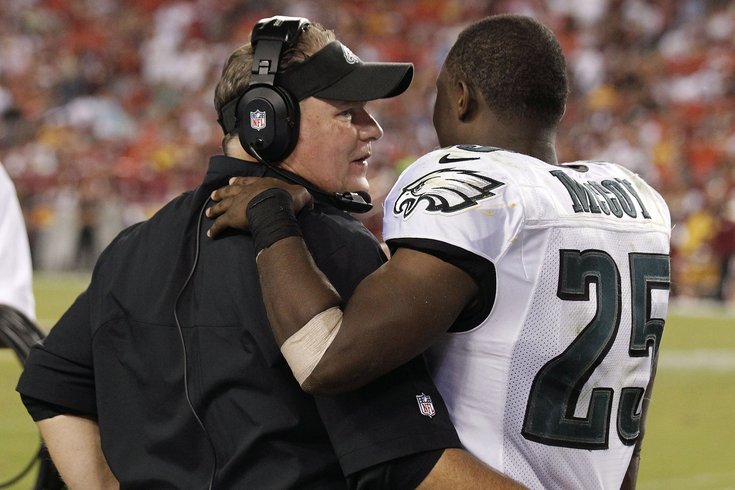 Philadelphia Eagles head coach Chip Kelly met with the media for the final time Thursday before his team hosts the Buffalo Bills on Sunday.

And although the coach didn't talk for very long at the NovaCare Complex before practice, he did speak at length on former Eagles running back LeSean McCoy, who said a day earlier that he had no intentions of shaking his ex-coach's hand if the two should cross paths at some point at Lincoln Financial Field this weekend.

The rocky breakup between McCoy and the Eagles has been well documented, but after listening to Kelly Thursday, it really seems like the coach has genuine remorse for the way that trade -- the one that sent McCoy to Buffalo for former Oregon linebacker Kiko Alonso -- went down.

Here are Kelly's full comments on McCoy, the trade, and why he doesn't blame Shady for being "pissed off."

Q. He said yesterday that he wouldn’t shake your hand. As a coach who has devoted a lot of time to a player…“That’s his choice, and I understand it. How he was traded wasn’t handled right. And I’ve said that before. I did not get an opportunity to talk to him and it’s a lesson that we should never do. To be honest with you, we were told that the trade wasn’t initiated and wouldn’t be initiated until the next morning, so there were no phone calls to be made. And then all of the sudden, I’m driving to an event and he’s been traded. And I felt bad that I didn’t get a chance to talk to him. I called him and he didn’t answer my phone call.

“I know he was pissed. And he should be pissed, rightly so. Every player that’s ever left this team, I’ve talked to him personally, myself. Everyone that’s in town, we talk to them here in our office; I talk to him, coordinator talks to him, the position coach talks to him. We have a way we that do it that we think is the right way to do it. And it wasn’t exercised in that case. And I understand why he’s bothered. He was an all-time leading running back here, and he felt like he was disrespected, and it was wrong. “And because I was part of it, it’s on me. “When we traded for Sam [Bradford] and for Nick [Foles] with Jeff Fisher, it was a great situation. Jeff and me were both on the phone together and said, ‘Alright, when are you going to make the call? Let’s call now. When we’re done our phone calls, text each other.’ He texted me that he was done; I texted him when I was done. I then called Sam and he called Nick. That’s the way it should have been done. “It wasn’t handled that way with LeSean and I understand why he’s not happy about it, and he should not be happy about it. And that’s why I would apologize for that, because it didn’t happen the right way. But on our standpoint, we thought the trade wasn’t going to be initiated until the next morning, so there was no phone call to be made until the league approved the trade. “I understand where he’s coming from, and if he doesn’t want to shake my hand, I understand that. But I will always shake his hand. If he extends his hand to me, I would always shake his hand. I have great respect for him as a player. Everything we asked him to do here he did. He was an outstanding football player for two years here. The only reason he isn’t here is that the money was too high. He’s still a really good football player in this league.“I don’t know if I can say anything else besides that. But I do have great respect for LeSean. I think he’s a heck of a football player and we’re going to have our hands full when we play him this week.”

"I have great respect for LeSean ... We're going to have our hands full when we play him this week." https://t.co/z8cOKcjWs2

And before another question could be asked, Kelly was called away from the podium by his media relations team. We'll have to wait until Sunday to hear from Chip again ... and see if his feelings change depending on what happens on the field.