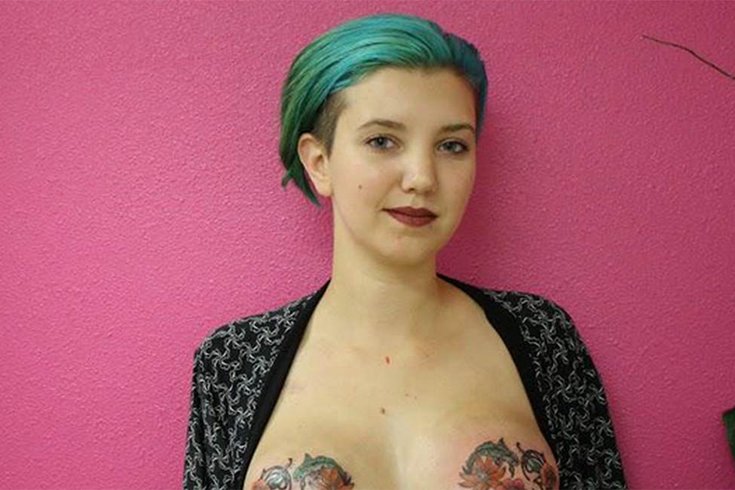 Nikki Black was a stand-up comedian working in Philadelphia when she was diagnosed with breast cancer.

Warning: An image below may not be suitable for all ages.

Earlier this month, Nikki Black bared her soul – and her breasts – in a piece for XOJane.com.

Black was a standup comedian and writer in Philadelphia when she was diagnosed with breast cancer at the age of 23. She had a double mastectomy.

At the time of her diagnosis – she is now 25 – Black was just about to move into a Fishtown townhouse with other comedians. "I was not prepared for that kind of blow," she wrote.

Still she continued her performances. "It was the best way I had to process my emotions and make sense of a chaotic universe," she wrote in XOJane:

Unfortunately, I began experiencing an open sexualization of my disease I had not anticipated. Immediately after going public with my diagnosis and posting a video of a cancer set on my Facebook wall, I received messages saying things like, “Those were my second-favorite pair of boobs in Philly.”

People openly asked me how I was going to handle reconstruction before I had even made that decision myself. One guy asked me what size I was going to get, and I attempted to answer frankly by saying probably the same size.

“Good choice,” he said, then he pointed at my soon-to-be removed, cancer-filled breasts and added, “And I mean, good choice.”

Black had decided to have breast reconstruction, and knew almost from the outset that she wanted to reclaim her identity with post-mastectomy tattoos.

But as she underwent chemotherapy, she battled deep depression. It traumatized her and she shut down, she wrote.

On Christmas Eve 2014, she moved to Los Angeles, hoping for a new beginning. After feeling miserable and disconnected for about six months, she eventually began to feel the strength "to begin finding my way back to myself." 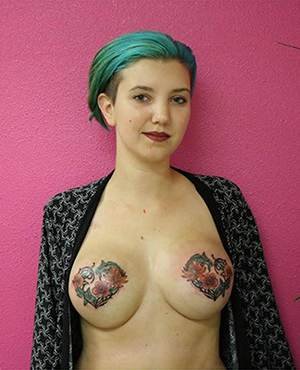 Eventually, she met with a tattoo artist that she found through the P.ink organization, which connects breast cancer survivors to post-mastectomy tattoo artists.

"Getting the tattoos for me was a way of taking back control of my body," Black told Huffington Post. "I didn't want my pre-cancer body back, but I wanted the body I have to be mine. So many people had put their mark on it, and I wanted to reclaim it."

Today, her breasts her adorned with heart-shaped tattoos, floral with fish, reflecting that she is a Pisces and had spent time before her mastectomy near the ocean – including Ocean City, N.J. –  and the koi pond at her mother’s home, she told Yahoo Health:

“The fish remind me of all of those happy, calm, and safe places,” she says.

"The tattooing was like therapy, a surgery for the soul," she wrote.

Her cancer now in remission, Black said the response to posting photos of her breasts online has been quite positive. Her story went viral.

“I didn’t know that many people would care,” she told Yahoo Health. “It’s been pretty incredible.”