The nine children who died 'didn't have enough time to show the world what you could be,' family member says 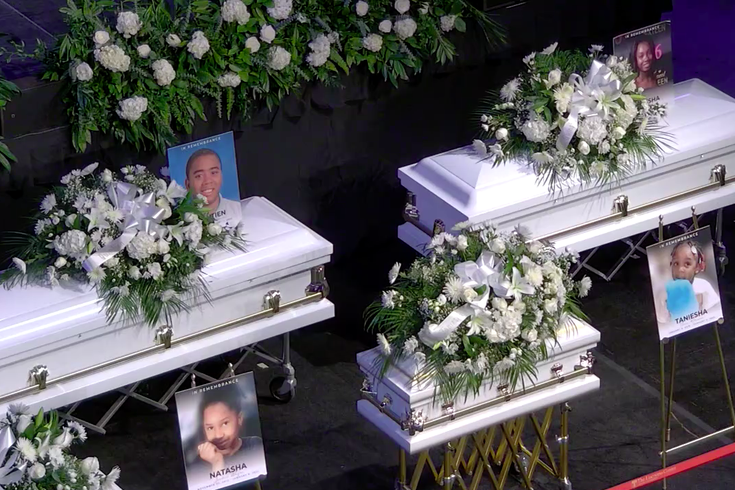 A public funeral service was held Monday at the Liacouras Center to remember the 12 people, including nine children, who died in a rowhome fire in Fairmount on Jan. 5.

The nine children and three adults who died in the devastating fire in a Fairmount rowhome were memorialized Monday during a public funeral service.

Dominique Cook, whose sister, Rosalee McDonald, and cousins were among the victims, described the ways the children influenced her life and how she will remember them.

Two Philadelphia fire trucks formed an honor guard to salute the 12 victims. Twelve hearses departed from the Liacouras Center after the service for a private burial. The ceremonies will conclude with a repast scheduled for 5 p.m. at The Met Philly.

"The family said we're going to have a celebration here," Waller said as the service began with the song "How Great Is Our God" and a focus on the family of the victims.

"In these moments, we are not North Philly or South Philly, we are not uptown or downtown," Waller said. "We are Philadelphia, and we are here to love on our brothers and sisters."

Waller noted at the top of the service that most speakers would be members of the family and people who knew the victims personally, rather than a "parade" of city officials. 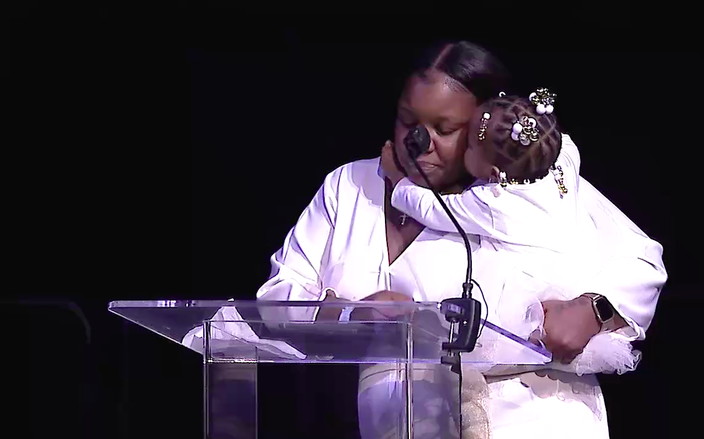 Dominique Cook is kissed as she remembers the family members she lost in a Fairmount house fire that killed 12 people earlier this month.

Mark Vitvitsky, principal of the Bache-Martin School in Fairmount, spoke about the enduring legacy of Quintien, Destiny, Shaniece, and Natasha, who each attended the school and were active members of their school community.

"The children certainly made the greatest impression on us. They shared the same sense of responsibility," Vitvitsky said. "That's not always something you can say about children. They knew they were responsible for looking after one another, and you could tell how close they were."

Vitvitsky met the children during his tenure as principal at Bache-Martin. He said the children expressed that the challenges brought by the COVID-19 pandemic, particularly the lack of "personal connections" through virtual learning, were especially challenging for them.

"Quintien had a big heart, so big it made room for everyone," he said. "If it were up to me, or anyone in the Bache-Martin community, we would've tried to get him elected mayor." He said Destiny was incredibly artistic and creative, and that Shaniece and Natasha were inseparable.

"They made those around them better, and want to be better," Vitvinsky said. "They always offered us a chance to witness the best of us."

Several members of the family, including Quintien's father, Christopher Tate, also made remarks.

"I'm really hurt and I can't really explain the feeling, but one thing I can say is that I was blessed to have my son in my life," Tate said. "I've been reading what people have been saying" about his heart, his character and his smile. 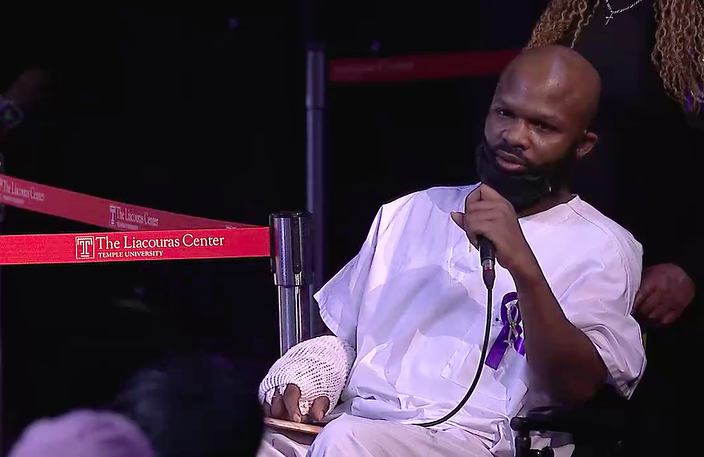 Howard Robinson reflects on the lives of his four children who died during the Fairmount house fire earlier this month. 'If you got loved ones in this room, just hug them and tell them that you love them, because it's sad to say that you never know when that last day is going to come,' he says.

Howard Robinson, the father of four children, had been hospitalized due to heart surgery in the weeks prior to the fire. Every day, he said he spoke to his family on the phone. They'd tell tell him they couldn't wait for him to come home.

They day before the fire, he surprised them by coming home unannounced.

"I got to play with them. I got to hug them. I got to talk to them, run around with them, as much as I could move around," Robinson said. "We spent that whole day together – all of us.

"And then this (tragedy) happened that same night that I came home. It hurt me so bad that the whole time I was in there, they were waiting for me to come home. I still thank God that he gave me that one day to spend with them before that happened. You never know, if you got loved ones in this room, just hug them and tell them that you love them, because it's sad to say that you never know when that last day is going to come."

Sallie Thomas, whose nieces, great-nieces and great-nephews died in the fire, urged the audience to take a lesson from her experiences as a member of the family.

"If you have some forgiveness to do, forgive. Don't let time pass away when you have the opportunity to say 'I love you,'" Thomas said. "Just love your family, friends and neighbors. Don't let the sun go down on your anger."

A cap, gown and posthumous certificate of graduation was presented to the late Quinsha White.

The funeral service included clergy from other churches around the city, who, in partnership with churches around Philadelphia, provided the family of the victims financial support as they continue to grieve.

"We cannot imagine the true heaviness of your hearts," Wingard said. "Temple is just one of the organizations across the city, state, and country that feel for you and who stand ready to assist you.

During his closing remarks, Waller focused on the importance of the community coming together to honor the victims. He criticized media reporting that focused on the victim's actions rather than tragedy of the fire itself. He praised the community response and the city leaders who took part in honoring the legacy of the family, saying that's what Philadelphia really is about.

People can help the families impacted by the fire through several crowdfunding efforts.

The fire, which occurred on the 800 block of North 23rd Street on Jan. 5, was the deadliest single blaze in Philadelphia in more than a century. The building contained two units owned by the Philadelphia Housing Authority.

A preliminary investigation found the fire was caused by a 5-year-old boy playing with a lighter inside the upper unit. There were six battery-operated smoke detectors inside the upper unit, but none of them were operable. There also were not any fire extinguishers or an operational fire escape.