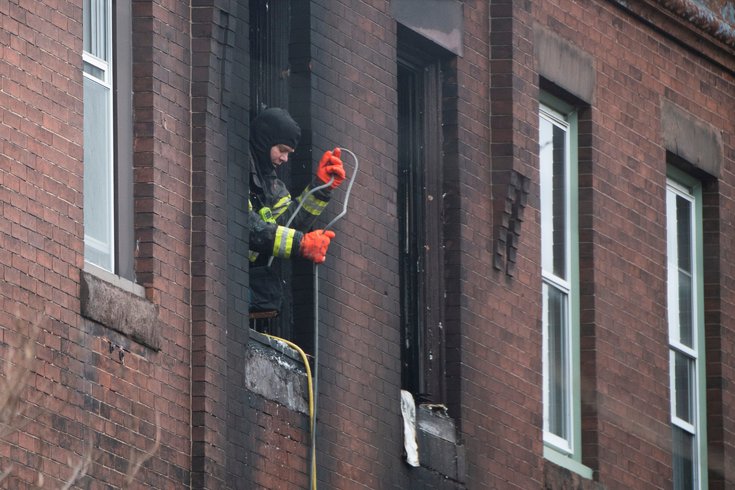 Twelve family members were killed in a Jan. 5 fire at a property in the 800 block of North 23rd Street in the Fairmount section of Philadelphia. Investigators say the blaze almost certainly began when a Christmas tree was ignited by a lighter found nearby. None of the smoke alarms inside the unit appear to have been working, said Fire Commissioner Adam Thiel.

The 12 people who died in last week's Fairmount rowhome fire were not alerted to the flames because the smoke detectors in their unit either had been removed or had no batteries inside, Philadelphia Fire Commissioner Adam Thiel said.

Thiel also on Tuesday confirmed earlier reports – "with near certainty" – that the fire started when a 5-year-old boy ignited a Christmas tree with a lighter. The preliminary conclusions about the cause and the inoperable smoke detectors were reached by an expert team that has investigated the fire scene for a week.

"We are left with the words of that 5-year-old child – a traumatized 5-year-old child – to help us understand how the lighter and the tree came together with tragic consequences," Thiel said. The boy was among the survivors of the blaze. "We have disproved any other theories (and) hypotheses based on the incredible level of expertise that we brought, including ATF's National Response Team and all the other partners who contributed to this investigation."

The rowhome on the 800 block of North 23rd Street is owned by the Philadelphia Housing Authority. It caught fire just after 6:30 a.m. on Wednesday, Jan. 5. The building contained two apartments spread across three floors. The bottom unit, covering the first floor and part of the second floor, had eight occupants who all survived the blaze. The top unit, including part of the second floor and the third floor, had 14 occupants.

Of the two survivors from the property's upper unit, the 5-year-old boy was the only one who was on the second floor at the time the fire started, investigators said. A warrant obtained in the investigation also included an interview with the boy, who had told neighbors and first responders what happened.

City officials share preliminary findings from the investigation into the fire in the city’s Fairmount section that claimed the lives of 12 people on January 5, 2022. https://t.co/Jc5m9GuXco

On Friday, Kelvin Jeremiah, president and CEO of the Philadelphia Housing Authority, said the property damaged by the fire was an older unit that PHA has owned since the late 1960's. When the property was inspected last spring, Jeremiah said smoke alarms with 10-year lithium ion batteries were installed and deemed operational in both units, including two tamper-resistant alarms placed in the building's upper unit.

Jeremiah said the tenants had signed documents acknowledging that work that had been done.

Fire investigators who scoured the scene determined that none of the smoke detectors inside the upper unit appear to have been working at the time of the fire, and nearly all of them appear to have been older models that required a 9-volt battery, Thiel said.

The only alarm that worked was in the building's shared basement, but it was late to respond to the blaze because the smoke and heat rose before banking down to the basement. That alarm was a newer unit with a 10-year lithium ion battery.

"Smoke inhalation can happen very quickly," Thiel said, noting the fire occurred during the predawn hours when people may have been asleep.

“We were able to identify that 6 of the 7 smoke alarms (in the unit) were the 9-volt battery style, five of which had the batteries removed, one was completely destroyed, so we don’t know for sure, but we believe that was of the same type," Thiel said.

The Philadelphia Housing Authority did not immediately respond to a request for clarification about discrepancies concerning the property's smoke detectors.

Thiel said Philadelphia has been a national leader in pushing for the installation of smoke alarms powered by 10-year, lithium-ion batteries. Such units are sealed and more tamper-proof than 9-volt models.

"It's not impossible, but it is very difficult to remove the battery and there's not much you can do with it, versus the 9-volt smoke alarms," Thiel said.

Just in December, the Philadelphia Fire Department installed 1,100 of the newer-model smoke detectors in properties across the city. Thiel explained that a large number of fires in Philly occur in legacy buildings that don't have newer fire prevention devices, such as upgraded alarms and sprinkler systems.

"We have to figure out a way to address the old infrastructure in the city of Philadelphia," City Council President Darrelle Clark said Tuesday. "That should be first and foremost before people start pointing fingers."

The victims of the Fairmount fire were all families members who were authorized to live inside the property. They had resided there since 2011 as their family continued to expand. The city does not have occupancy limits for intact families, but PHA does discourage tenants from allowing unauthorized occupants to live in their homes.

A vigil for the victims was held on Thursday night near the Bache-Martin School, 812 N. 22nd St. in Fairmount, where some of the children who died had been students.

During remarks on Tuesday afternoon, Jeremiah again urged Philadelphians to show support for the family and underscored the need for better housing solutions.

"We have a responsibility to review this incident and to carefully explore all options with regard to how we can continue to ensure the safety of our residents — and so that's what we will do," Jeremiah said.

"This incident highlights the fundamental truth that there is, in fact, an affordable housing crisis in this city," Jeremiah added.