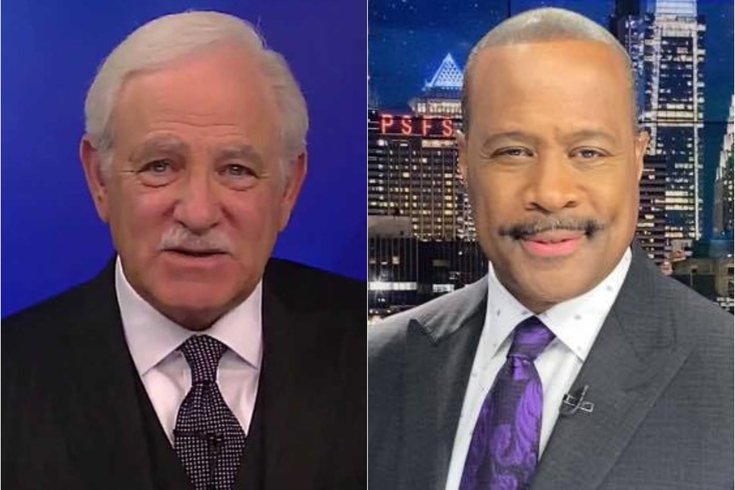 6ABC's Jim Gardner, left, will anchor the 11 p.m. news for the final time on Tuesday, Jan. 11. He will continue to host the 6 p.m. broadcast of Action News through 2022. Rick Williams, right, will take over anchoring the 11 p.m. broadcast.

Gardner will be succeeded by longtime Action News anchor Rick Williams, who has been with the station for more than 30 years. Williams will team up with Ducis Rodgers and chief meteorologist Cecily Tynan on the 11 p.m. broadcast, the station announced Tuesday afternoon.

#BREAKING: Rick Williams has been named anchor of the 11 p.m. newscast, beginning Jan. 12, 2022. Williams will replace the legendary Jim Gardner, who is stepping down from the role in 2022. MORE INFO: https://t.co/4fIlPLoI88 pic.twitter.com/KWCdZerWla

"I'm delighted that Rick Williams will anchor Action News at 11 p.m. following Jim Gardner," President and General Manager Bernie Prazenica said. "Rick is uniquely qualified by his 30+ years of experience in anchoring Action News in the morning, noon and evening. His knowledge of our region and deep roots in our community make him the perfect choice."

Gardner, 73, announced in November that he will be retiring at the end of 2022. He will continue with the station on the 6 p.m. broadcast through the rest of the year. He had planned in advance to have a final 11 p.m. broadcast in January.

In his final broadcast, Gardner reflected on his years with the station, his mission as an anchor and his appreciation for the viewers and colleagues he's grown with over the years.

Final part. Nice moment to have Rick Williams on the set at the end of the newscast. 11pm anchor chair was officially passed on. pic.twitter.com/6iWRFA2cch

Williams shared his admiration for Gardner and expressed excitement about his new role.

"It's no small thing to be able to follow a news icon and, in many ways, a role model," Williams said. "Jim set the journalistic bar very high at 11 o'clock, and I hope I can maintain the same standard of excellence while also having a bit of fun with my evening colleagues. It's going to be exciting!"

The peaceful transfer of power… pic.twitter.com/TT413RejIG

Williams, a native of New York, joined 6ABC in 1988 after working at WRAL-TV in Raleigh, North Carolina and previous roles in West Virginia and Washington, D.C. His career began in radio after he graduated from Howard University with a bachelor's degree in broadcast journalism.

Tom Davis, 6ABC's vice president of news, also praised Williams, saying he is the right fit for viewers who have grown to know him over the years.

"Rick has a rare combination of being a great newsman and an even better person!" Davis said. "He's truly earned our viewers respect and trust."

Thrilled to retweet this from Channel 6! Go get 'em Rick! I'd say good luck, but you sure don't need it. https://t.co/bNXi9Po3d0

At the time Gardner announced his upcoming retirement, he said he wanted a runway to his exit and that freeing up his evenings would be a good first step.

"It is a lifestyle I haven't experienced in 45 years — and it's time," Gardner said.

Gardner has been at 6ABC since 1976 and has become the face of television news in Philadelphia, covering more than four decades of major events in the city and across the region. He has interviewed every president and major presidential candidate since 1976 and developed a reputation among the best news anchors in the business.

Gardner's pending retirement will come as 6ABC undergoes a larger transition from multiple veteran reporters who have departed in recent years.