Mechanical problems forced the pilot to make a daring emergency landing. One first responder dubbed the near-tragedy the 'miracle on Burmont Road' 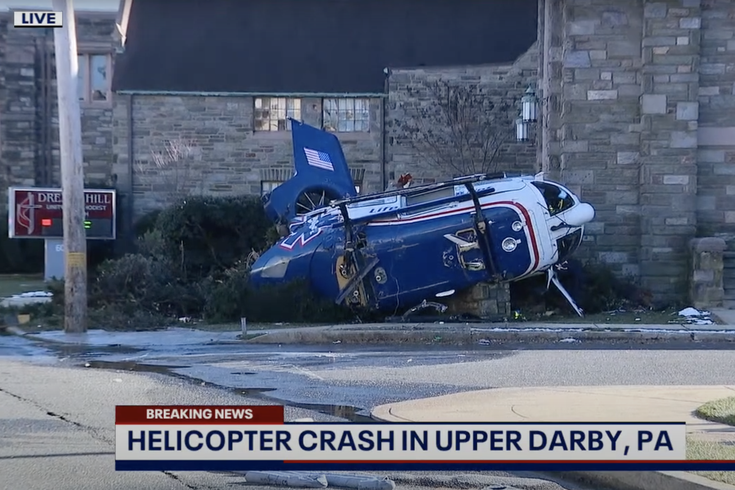 A medivac helicopter on its way to Children's Hospital of Philadelphia crashed in Upper Darby, Delaware County on Tuesday, Jan. 11. The crash was the result of a controlled landing after the helicopter began having mechanical problems, officials said. It landed near the Drexel Hill United Methodist Church.

A medevac helicopter crashed next to a church in Delaware County on Tuesday afternoon, and all four passengers survived with non-life threatening injuries, including a child, authorities said.

The crash happened around 1 p.m. near Burmont Road and Bloomfield Avenue in the Drexel Hill section of Upper Darby. The medical helicopter hit the ground near Drexel Hill United Methodist Church and news footage showed the helicopter lying on its side near the church's steps.

Emergency responders said the helicopter was en route to the Children's Hospital of Philadelphia when it began having mechanical problems. It was transporting an infant patient from Maryland, according to CBS13 Baltimore.

Officials called the crash a controlled landing and one described it as a "miracle on Burmont Road" because it wasn't more serious.

The four people in the helicopter's cabin escaped with minimal help from first responders and none of them had sustained any life-threatening injuries. There also was no serious damage to the church, the homes around it or telephone and power line wires in the area. After the crash, the infant was brought to CHOP and the three other passengers were transported to Lankenau Medical Center in Wynnewood.

At 2 p.m., firefighters were still dealing with fuel leaking from the crash site, authorities said. The National Transportation Safety Board will be investigating further, according to police.