How will Carson Wentz, Alshon Jeffery and Jordan Howard perform next season? 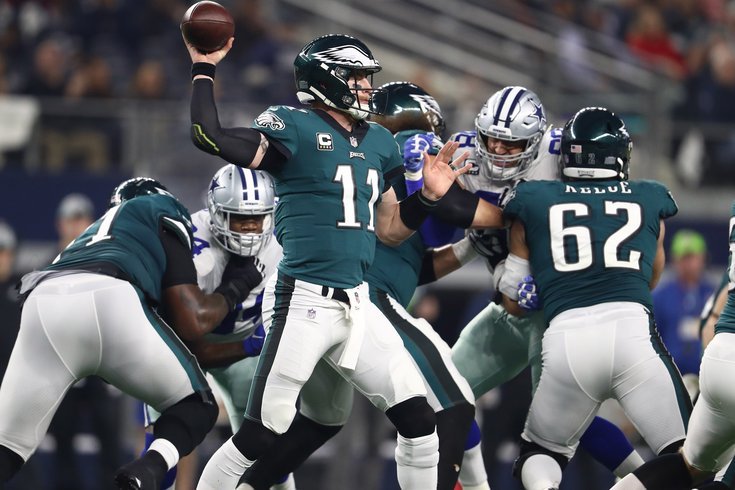 If Carson Wentz can stay healthy in 2019, he's expected to have a big fantasy impact among NFL quarterbacks. His history has him right at the fringe of QB1 status ahead of the season, according to ESPN's early fantasy football rankings.

ESPN Fantasy Football released its 2019 season projections this week, complete with rankings and statistics for offensive players across the NFL.

RELATED: 10 players the Eagles can least afford to lose to injury

The Eagles have talent all over their offense — great for real life, a mixed bag for fantasy. Outside of Zach Ertz, relying on Eagles players is a gamble because the ball gets spread around so much. On the other hand, the Eagles tend to generate a lot of offense, so everyone can put up serviceable to good numbers in any given week.

While the rankings and numbers below may have some early value for fantasy consideration, they're more interesting now as a preseason benchmark for how the ball might get distributed. Plus, it will be fun to look back and see how right or wrong they were.

More context for these projections (including last season's stats) can be found at ESPN, which has mini bios that explain the rationale behind the estimates for each player.

What stands out most here is that Miles Sanders is projected by ESPN to be the Eagles' leading rusher over Jordan Howard. There isn't a huge difference in attempts, but Sanders is also projected as a bigger factor in the passing game.

The other piece worth noting is the significant drop in production from slot receiver Nelson Agholor, who would fall from 64 receptions/737 yards/4 TD in 2018 to the projections listed above. That's explained by the presence of DeSean Jackson, the continued emergence of Dallas Goedert and the arrival of Arcega Whiteside, but at first glance, those numbers appear a bit low for Agholor.

We'll see how these projections change as the summer progresses and other fantasy platforms start releasing their own. The good thing to take away from it for the time being is that the Eagles figure to have a high-power offense with impact players all over the field. They'll be better prepared than most teams to weather injuries over the course of the season.