Father's Day Gift Guide: What to buy dads who game, overcaffeinate or are total beer nerds 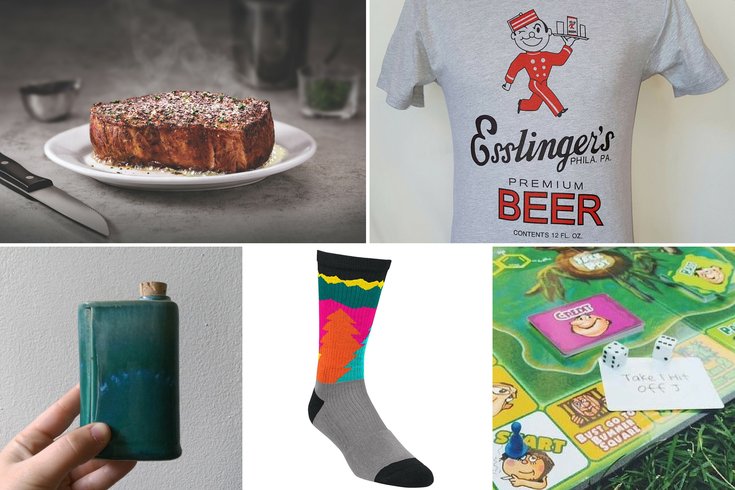 From left to right, going clockwise: A New York strip steak from the newly reopened Ruth's Chris Steakhouse, an Esslinger's Beer T-shirt from Shibe Vintage Sports, the 'Pass the Grass' board game from retired dentist Paul Greenwald in Montco, mountain camping socks from Mitchell & Ness and a ceramic flask from Fireside Camp Supply.

They surprise us with their candor, make us laugh when we're blue and never fail to keep us grounded when our mind wanders toward the absurd. And for all of the above reasons (and lots more), we pay them homage each Father's Day. It's the least we can do. Like, bare minimum.

Below, find 11 local — or locally minded — Father's Day gift options that will delight dads who cook, drink way too much coffee, take their Sixers pride seriously and more.

For dads who can still ravage a piece of steak

For the old-fashioned, carnivorous dad who's not afraid to carve into a plate-filling slab of red meat (sorry, vegetarians — doesn't look like there's a seitan equivalent for this one), give him the treat of Ruth's Chris Steakhouse's New York strip steak, newly available at the Sonesta Hotel in Center City. Unlike many restaurants, gift cards can be purchased both in-restaurant and online. (Various prices, GiftCards.RuthsChris.com)

For dads who are straight-up beer nerds

Have a dad who loves beer, who also happens to love vintage? Shibe Vintage Sports — in addition to offering a bevy of sports-apparel shirts that might be up dad's alley — has a print T-shirt featuring Esslinger Brewery's iconic bell hop man. The brewery, which operated at Ninth and Callowhill streets from 1879 to 1964, was the first Philadelphia brewery to can their beer. Want to round out the gift? Pick up a mix-and-match six-pack from any one of the city's bottle shops. And if you don't know what to buy, don't fret: Philly's brewers have got you covered. ($25, ShibeVintageSports.com)

For dads who pass grass more than they mow it

If your dad's more interested in a doobie than a beer, take a peek at this pot-oriented board game, designed by Montco retired dentist Paul Greenwald, meant for use in states where recreational and medical marijuana is legal. Players take turns drawing cards, taking puffs and completing challenges, while advancing on the game board with a roll of the dice. After a round, be sure to take dad out for brunch — a big, big brunch. ($25, Amazon.com)

For dads who camp

Face it: The last thing your camping-savvy dad needs is another pocket knife. What does he need? Socks. As not-at-all-glamorous as it sounds, these bad boys, original to Mitchell & Ness, have a colorful design flair while still being practical. ($14, MitchellandNess.com)

This corked, all-ceramic flask from Fireside Camp Supply (and handcrafted in Philadelphia) is a can't-lose for any dad who doesn't mind — no, thrives on — indulging in a little midday nip. Here's a useful tip from Fireside owner Christina Saboe: This flask won't set off metal detectors. Cheers to that! ($25, FiresideCampSupply.com) 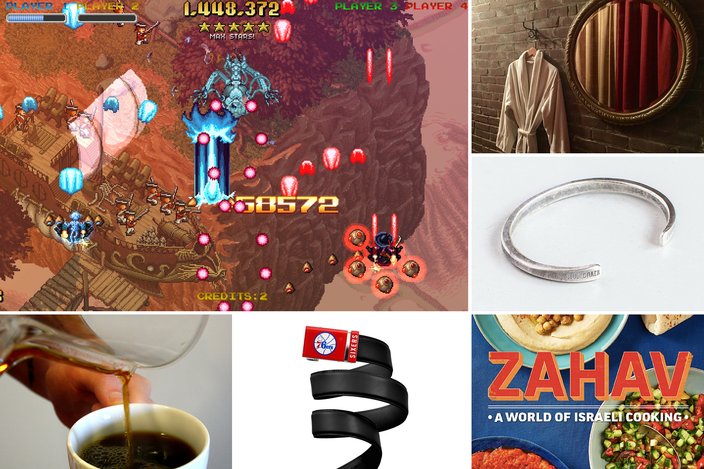 From left to right, going clockwise: The 'Jamestown' video game by Final Form Games, a men's facial from Fabriq, a sterling silver men's cuff from Workshop Underground, 'Zahav: A World of Israeli Cooking' by Michael Solomonov, a no-holes 76ers belt and a Chemex coffee maker from Function Coffee Labs.

For dads who game

If dad's a gamer and looking for some fast-paced, blast-the-crap-outta-your-enemies fun, Old City-based Final Form Games' "Jamestown" — a top-down shooter placed in a 17th-century British colonial Mars — is the way to go. Best of all, it features a four-player co-op mode, meaning you, mom and even Little Susie can join in on the fun. Consider it family bonding time. ($10, Steam and the PlayStation 4 PlayStation Store)

For dads who want to feel pampered for a day

No, spa gifts aren't just for mom. Fabriq Spa on Fabric Row offers a deep cleansing package that comes with a neck and chest massage. Products used for the facials are organic, if he cares about that sort of thing. ($90 for 60 minutes $120 for 90 minutes; FabriqSpa.com)

For dads who are proudly fashionable

Jewelry's not just a mom thing, either. Workshop Underground on South Street, which just opened its second-floor men's shop, recently stocked up with "Workshop Cuffs" — that is, fairly minimalist sterling silver cuffs made just a wee bit dazzling through its patina. ($72, 1544 South St.)

For dads who cook dinner

If you live at home with a dad who helms the kitchen every night, selfishly pick him up a copy of Zahav owner Michael Solomonov's "Zahav: A World of Israeli Cooking." Armed with Solomonov's cookbook, he can whip up Zahav's famous fried cauliflower, hummus and more. ($23, BarnesandNoble.com)

For dads who haven't given up on the Sixers yet

This no-holes 76ers belt, from "Shark Tank" success story Mission, comes in red, black, blue and white with an acrylic finish. Instead of holes, the belt employs a track on its underside for a more snug fit. As far as sports gifts for dad go, this one's a slam dunk. ($50, MissionBelt.com)

For dads who are constantly overcaffeinated

Is dad always a little buzzed on coffee? Set him up with equipment to improve his brew: Function Coffee Labs in the Italian Market sells a 10-cup pour over Chemex coffee maker, which removes coffee oils from coffee and leaves you with a more refined drinking experience. Moreover, Function will give you a free coffee or tea drink with each purchase — so you win, too. ($42, 1001 S. 10th St.)