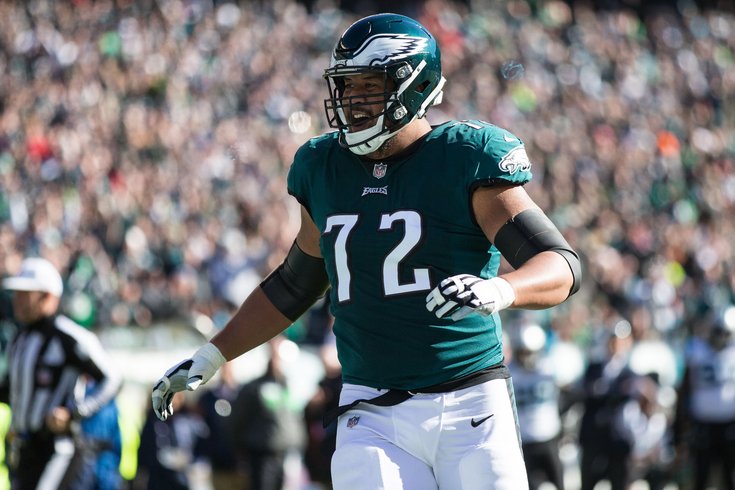 Halapoulivaati Vaitai is a less important player to the Eagles now that they have drafted Andre Dillard.

The Philadelphia Eagles have made three picks in the 2019 NFL Draft. They only have two remaining. If they only make those picks and don't find a way to add more picks, they will have only made five picks. Trust me, I double-checked the math on that.

That would be a year after the Eagles only made five picks in 2018, meaning that over the last two drafts, the Eagles will have only made 10 picks. Again, the math here is correct. That will almost certainly be the fewest number of picks by any team in the NFL. Here is how many picks each team in the league has remaining, via Field Yates of ESPN:

And so, the Eagles will likely be looking to trade some of their veteran players for more picks, difficult (and rare) as that may be once the draft is already underway. By popular request, here are some players who might make sense in a trade:

• WR Nelson Agholor: There have already been several reports this offseason that Nelson Agholor is available for trade. The Eagles exercised Agholor's fifth-year option last offseason, and he is on the Eagles' salary cap in 2019 at $9,387,000, which is now fully guaranteed. The Eagles would incur a dead money charge of the full $9,387,000 if they cut him, however, they would save the full $9,387,000 if they traded him for literally anything.

The Eagles added WR J.J. Arcega-Whiteside in the second round of the 2019 NFL Draft, which adds to their depth at the position, though there are no obvious suitable replacements in the slot for Agholor if the Eagles did indeed deal him.

• OT Halapoulivaati Vaitai: Vaitai has been a valuable swing tackle for the Eagles, capable of playing both LT and RT. With Jason Peters leaving games early as much as he has the last two seasons, Vaitai has been kept busy, taking on the unenviable task of coming into games cold. He is scheduled to become a free agent in 2020. With the addition of Andre Dillard, the Eagles would certainly listen to offers, but it's doubtful that any team would give up much value.

• DE Chris Long: Long may or may not play in 2019, and it's really dependent on the kind of role he thinks he'll have. In short, if he's going to go through the rigors of an NFL offseason, he wants to play in the games. (You can hear Long's full perspective on his situation with the Eagles on the Birds Eye View podcast with Jeff McLane and Zach Berman.) If some (presumably) contending team came calling, and Long liked the idea of playing there, maybe one year of him is worth a late Day 3 pick?