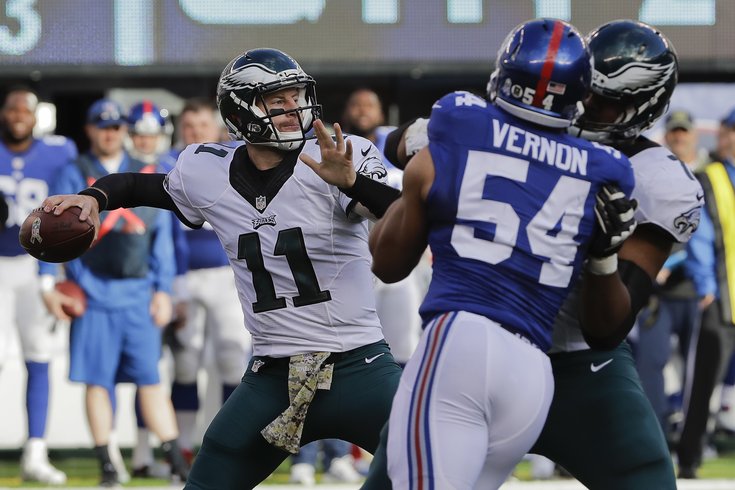 Carson Wentz got flustered under heavy pressure against the Giants

In case anyone needs reminders, Philadelphia Eagles quarterback Carson Wentz is a rookie, and therefore he is not always going to be perfect on his decision-making, and his throws. "Carson Wentz the rookie" showed up Sunday afternoon against the New York Giants on what could have been a game-winning touchdown drive at the end of regulation.

On Monday, we showed the final incomplete pass from Wentz to Jordan Matthews, where Wentz was off the mark on what probably should have been a touchdown. It was the same route the Eagles ran against Cleveland Week 1 on the Wentz's first TD pass of the season.

However, it wasn't just that one throw against the Giants that Wentz would like to have back. Wentz would have liked to have taken a mulligan on that entire final series.

"I don't want to speak for him but I know after the game he was very down about that last whole series about some of the decisions and throws he made," said Doug Pederson, speaking to reporters in his day-after press conference. "He makes that play in practice 99 out of 100 times. Those two guys are on the same page with that particular route. We’ve seen it. The Cleveland game, the touchdown, it's the same route and he makes that play. These are just things that we are continuing to work through. We're obviously headed in the right direction and we're going to make more of those down the stretch."

For more X's and O's on that final drive, we spoke with former Eagles quarterback and current ESPN analyst Ron Jaworski, who broke down the entire final Eagles offensive series for PhillyVoice. From here on out, this is all Jaws' narration:

On the first down throw to Agholor for 17 yards, the Giants played man to man, and only rushed four on that play. It was a contested catch, but he makes the catch, Giants were pretty much in man to man.

The very next play, first and 10, 1:41 to go, they go zero-coverage. In other words, they’re bringing one more than you can block, nobody in the middle of the field. They’re just bringing everybody. Carson panics. He had a little stutter-go on the outside to Agholor, there’s pressure in his face from an unblocked defender, Olivier Vernon, so Carson basically doesn’t have time to throw that. 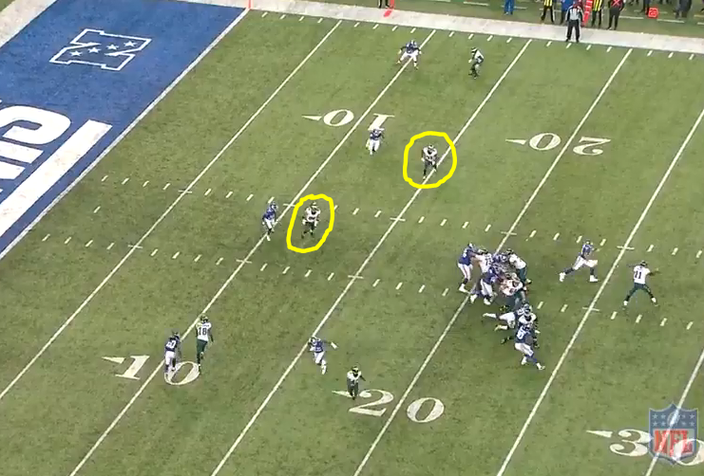 I think it’s a really well-designed play, a really good called play, it’s almost in anticipation of a blitz, and he just needed to get rid of the football. He had Ertz and Jordan Matthews open, with a quick pass, a hot, built-in sight-adjust. So he throws it incomplete. I thought he played a little fast on the play.

So now you have second and 10, 17-yard line. You’re going to get the zero-coverage again, and Spags now, he’s aggressive. He’s coming after Carson. Once again, he’s got Ertz vs. the blitz. He’s got pressure in his face, he’s got a defender coming clean from his back side, Jason Pierre-Paul, unblocked, untouched, and he moves out of the pocket.

In my opinion, it was another good play call. He had Ertz on another quick lookie, take one step, rocker step, and give him the ball. If he breaks a tackle, there’s nobody there, no safety, nobody, but at least you’re going to get a positive play. Again, built-in blitz, he throws under pressure to Sproles in the flat, incomplete. 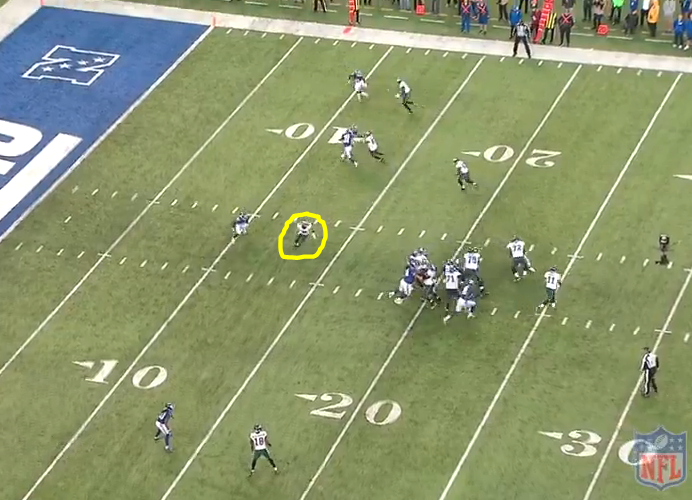 Again, zero coverage from Spags. He’s coming after him now. Third and 10, they’re going to run that screen pass. Again, here come the Giants. They’re bringing everybody. Man to man across the board, bringing everybody. It’s a screen, well read, 33 and 52 clean right at Carson, and JPP almost intercepts it.

Alright, now you’re down to one play, fourth and 10. They blitzed the last three plays. Spags says, ‘Shoot, we’re getting to him, we’re gonna bring it again.’ Carson reads it. He brings Sproles in. He brings him into the backfield. They bring Ertz to a tight position. They’re in a position to have seven blockers now, so the guy furthest away from the quarterback will be the guy you let free. He’s actually a little late in coming, because he’s worried about Sproles releasing. Matthews is on the quick fade, should be an easy touchdown throw.

I think Matthews does a really good job of moving to the outside. There’s a lot of space to the outside, as we say, throw it in the box, make the catch.

The reason you can’t run a corner route here is because a corner route’s breaking point is up the field. Carson wouldn’t have had time to let the play develop down the field. This ball has got to come out. They’re bringing one more than you can block, somebody is going to get home free. Agholor outside runs a little two-step shallow cross underneath, and the corner jumps it, leaving a lot of space for Matthews.

Jordan Matthews wins, and if he throws the ball over his outside shoulder it’s a touchdown. He missed him. There’s nothing wrong with anything Jordan Matthews did. The play call was perfect. In fact, I though the play calling on that drive was outstanding. Carson didn’t get rid of the ball on the hots.

So if you go back to that Cleveland game and you watch Carson’s footwork, which I went through about a hundred times this morning, he took three quick steps, got his weight back, stepped a little bit forward and delivered the ball with perfect accuracy against Cleveland.

This one he took one step and a little crow hop, never really got on balance, and kind of armed the throw, which caused it to be a little inaccurate.

Should he hit this one anyway? Yes. If he’d have used the same mechanics that he used Week 1 against Cleveland, I think it gives him a better chance. But he just missed him. It’s the exact same route, just flipped sides. You’re going to throw this to the field side. They’re on the left hash here, you want to give them a little more room outside the box, Matthews wins, he climbs the frame, breaks to the outside, and the throw is just a yard too far to the outside. Maybe two feet too far to the outside. Maybe a foot. But everything is good; he just missed him, and that’s going to happen.

I think he just hurried himself a little bit. He probably thought, ‘I got this,’ and he just rushed himself, just a tad.

Everybody runs this play. This isn’t a play unique to the Eagles. Everybody runs these inside go’s and fades in the red zone. They’re impossible to defend because there’s no help and there’s a lot of room for the receiver to run.

It’s an easy throw. I can’t make it any simpler than that. I can’t say this is a high degree of difficulty, this throw. I‘ve made this throw hundreds of times myself. They’re not that hard.