Pederson: Eagles are losing games that 'we really should’ve won' 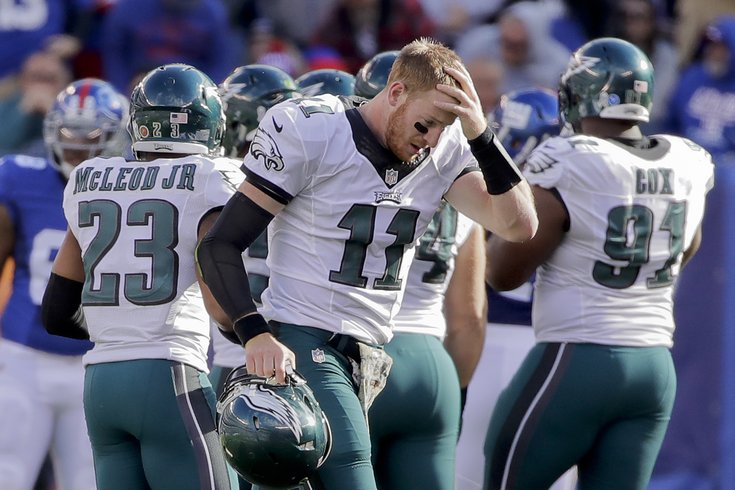 Philadelphia Eagles quarterback Carson Wentz jogs off the field after failing to convert on fourth down during the second quarter of Sunday's loss to the New York Giants.

Following their 28-23 loss to the New York Giants on Sunday, the Philadelphia Eagles are back at .500 for the first time since the 2016 NFL season got underway back in early September.

After getting out to a 3-0 start, Doug Pederson's team has gone 1-4 since their bye week and, worse yet, has gone 0-3 in the first half of their division schedule, all while falling to last place in the NFC East. The Eagles are clearly a team headed in the wrong direction, right?

Not so fast. There's a silver lining to be taken from their recent struggles, according to the rookie head coach.

The Eagles have been competitive in all four losses. They've lost by an average of less than five points per game and have overcome some big deficits in order to give themselves a chance to win at the end.

Basically, they're losing games that they should have won -- Pederson even admitted as much, something you don't often get from NFL coaches.

While your immediate reaction may be to recoil at someone taking solace in a loss, it's important to remember that one of the main differences between good teams and great teams in the NFL is their record in close games. The greats find a way to win those games.

However, at least in Pederson's mind, you have to learn what it takes to win in those situations. And that's what his team is doing.

“We’re obviously building something here," he said Monday. "But, when you look at these games that we’ve been in at the end, the encouraging thing is, we really should’ve won those games. The Detroit game, we had the lead. Dallas, we had the lead. And then yesterday, we had opportunities late in the game to take the lead and/or win the football game. So these are all things that as we build this thing, we’re going to win these games down the stretch as we go.

"That’s part of ‘heading in the right direction’ for me. And the fact that Carson [Wentz] continues to make plays — and yeah, sure, we don’t like the interceptions and all that — but relatively speaking, he protects the football. And we’ve done a good job there. And our tight ends had a little bigger impact yesterday, and we’ve got to continue to work that.

"Just overall, keep, keep, keep working. Keep working. And keep grinding. Because, like I tell the team after games like this, I promise them that if they keep working the way they’ve been working, good things are going to happen down the stretch.”

For Pederson's sake, he'd better hope that's the case. Their schedule isn't getting any easier.

Right now, despite what their plus-57 point differential (3rd in NFL) suggests, the Birds are not a great team. Their .500 record is much more indicative of where this team is midway through the first season of the Pederson/Wentz era.

They're young at the positions that matter most late in games (quarterback and head coach). They're still learning. Still developing. Still improving. And they're certainly not ready to compete for anything beyond a division title and they're winless in the NFC East.

Anyone who viewed this season as anything more than a rebuilding year -- even after that 3-0 start -- was sorely mistaken.

But the fact that they've been competitive in every single game they've played this season is proof that they are a good team, and certainly says something about the direction in which this team is headed.