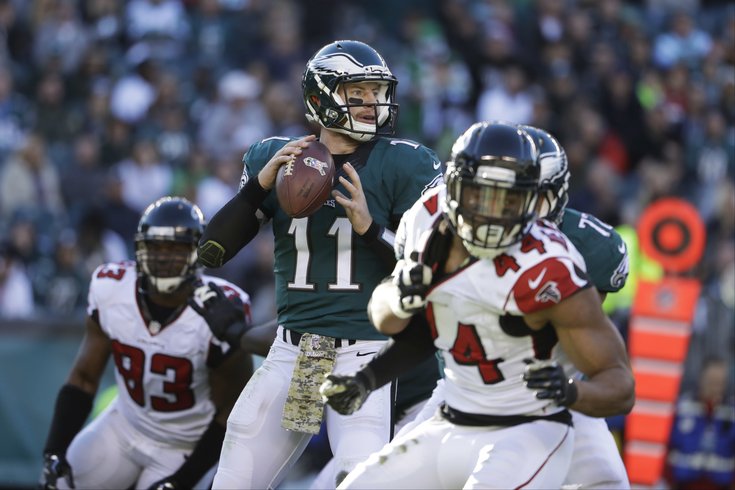 Philadelphia Eagles' Carson Wentz looks to pass during the second half.

It may not have gone down as expected, but you likely won't hear any complaining from Eagles fans following a 24-15 win over the Falcons at the Linc on Sunday.

Here are some quick thoughts on how it played out in South Philly.

•  Kenjon Barner averaged 38 yards per kick return in this one, including a big 52-yard return in the fourth quarter following the Falcons go-ahead touchdown. Josh Huff who?

• Despite not finding the end zone, Carson Wentz had a pretty nice day. He finished 25-of-36 for 231 yards (6.4 YPA) and a fumble. That's an 86.7 passer rating, but he looked much better than that number suggests.

•  The real star of the day on offense was Ryan Mathews. He must not have liked hearing Doug Pederson say Darren Sproles was the Eagles lead running back earlier in the week. He finished with 108 yards on 19 carries, two touchdowns, and a two-point conversion in the fourth quarter. He's the first Eagles RB since LeSean McCoy in 2013 to have over 100 rushing yards and two touchdowns in the same game.

•  But it wasn’t just Mathews. The entire Eagles backfield put in work on Sunday.

Wendell Smallwood carried 13 times for 70 yards, while Sproles finished with just 2 rushes for 19 yards, but also added a team-high eight receptions for 57 yards.

The only one without a carry was Barner. And we already talked about what he was able to contribute on special teams.

•  That allowed the Eagles to keep their offense on the field for 38 minutes. More importantly, it kept the Falcons offense off the field, a huge key in the win. The Falcons scored their fewest points of the season, less than half their season average.

•  Speaking of the run game... Hey, Jason Kelce did something positive.

Kelce with a great pull along the boundary, might be his best block all year @AdrianFedkiw pic.twitter.com/913VoEFZNs

•   But then a few plays later, Kelce was called for a hold.

That's Kelce's 8th penalty on the season. Leads the team.

The penalty proved to be a crucial one, as it stalled the drive and played a big role in keeping the Birds out of the end zone. Instead, they settled for a 29-yard Caleb Sturgis field goal.

Injury update: CB Nolan Carroll (concussion) is OUT for the remainder of the game.

And Matt Ryan, Julio Jones and the rest of the Falcons receivers took advantage. Jalen Mills was beaten by Jones almost immediately, but the Eagles were able to stop Atlanta's offense.

• Leodis McKelvin continued to look absolutely terrible, and he got absolutely toasted by Taylor Gabriel for a 76-yard score, the Falcons' lone touchdown of the day.

But, to be fair, McKelvin did seal the victory with a late interception.

•  On a crucial 3rd & 12 play with less than six minutes left in the game, Ryan put one exactly where it needed to be in order for a wide-open Jones to make the catch and pick up the first down. It's was as bad as any drop we've seen by an Eagles receiver all year.

Jones doing what the Eagles WRs do best @AdrianFedkiw pic.twitter.com/iUK3k2hkGu

•  What was going on with the kickers? Sturgis missed a pair of field goals, including a very makable one in the first half.  And Atlanta’s Matt Bryant missed one as well. Worse yet, the normally accurate Bryant also missed an extra point attempt in the fourth quarter, leaving the Falcons up two points instead of three. It was the first extra point he's missed since his rookie year … all the way back in 2002.

On the plus side, Sturgis made the one that counted most -- and wouldn't have mattered as much without Bryant's missed PAT -- when he connected from 48 yards out with two minutes left to put the Eagles up nine points.

•  The fact that this was not a penalty is sickening. And I'd be saying the same thing if it was an Eagles player who hit a Falcons player.

This is absolutely inexcusable miss from the refs here. 2nd missed penalty of the drive that's an automatic first. Good job refs. pic.twitter.com/5TjVlYJmeQ