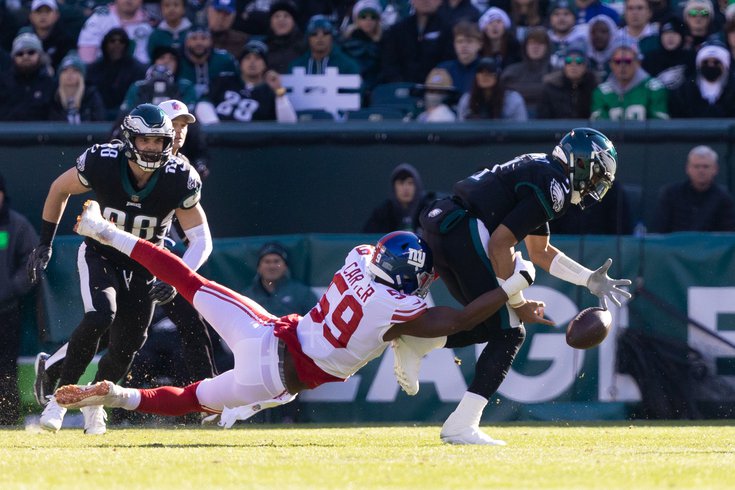 The entire Eagles offense was kind of stuck in neutral in Sunday's first half.

The Eagles' offense has been an absolute dumpster fire so far on Sunday, and they're locked in a 3-3 stalemate with the Giants as a result.

• With their offense looking like hot garbage to start the game, it was up to Jonathan Gannon's boys to keep the Giants in check to open the game. They weren't exactly up against the Greatest Show on Turf, but they lived up to their end of the bargain, with the defensive line starring in Philadelphia's early success.

Josh Sweat was the constant presence in New York's backfield, pressuring Jake Fromm throughout the half and making New York's fill-in QB feel him on a couple of hits around the right edge. He wasn't the only guy making Fromm's life miserable, however, with the Eagles getting pressure from Derek Barnett on the opposite side, Fletcher Cox in the middle of the line, and even on some occasional linebacker blitzes, with Gannon calculating that Fromm didn't have the goods to punish the Eagles for sending extra pressure.

Through 30 minutes of football, that calculation appears spot on. New York can't keep Eagles rushers away from Fromm, and Fromm isn't good enough to deliver with bodies in his face. If Philly's offense gets it together, this should be an easy victory.

• Almost every positive play the Eagles make in the passing game involves DeVonta Smith in some way. He's the guy getting open and making a catch, or he's the guy drawing attention and opening up space for somebody else, or he's even the guy setting a nice block to add some extra chunk yards onto a nice gainer. Maybe he hasn't been as consistent as some would like in the stats department, but he is one of the few guys you can get excited about watching the Eagles this year.

Philadelphia's offense finally got their big breakthrough when Smith broke open down the sideline midway through the second quarter, high-pointing the ball nicely to come down with it in traffic and push the Eagles deep into Giants territory:

If Hurts forces him the ball a little too much, it's for good reason. Smith is a baller, and it's likely he's going to continue to grow in stature as he fills out his frame and gets more reps at this level.

• The Eagles were fortunate to get away with a terrible opening possession without turning the ball over. Who do you hold more accountable — the head coach who came out throwing the ball for no real reason, or the quarterback who made a brain-dead decision and put them at risk?

There's room to criticize both. Philadelphia's run game has been the heart of their offense as they've found their footing in the second half, so going to the air three straight times to open the game is an eyebrow-raiser regardless of what Jalen Hurts did. The Eagles obviously need to strike a balance in order to be successful on offense, but exclusively going to the weaker part of your offense on the opening series is a little weird, especially when you get a third-and-four opportunity that gives you multiple options on the critical down.

Hurts was given the chance to make a play on third down instead, and he tried forcing a ball to Dallas Goedert instead of simply eating the play and living to fight another day, leading to this monstrosity of a throw:

What is Jalen Hurts doing? Another interception against the Giants to start this game#Eagles #FlyEaglesFly pic.twitter.com/2iCZAMcfyQ

It would end up being overturned and ruled incomplete on review, with replay showing the ball was not secured before being hauled in. That doesn't make the throw any better.

Philadelphia's second drive was a different version of the same problems. On the first play from scrimmage, Miles Sanders burst through the line for 11 yards and a first down, much to the delight of the home crowd, who have been begging for this team to embrace the run-first identity before, during, and after every single game. So of course, Sirianni decided to throw on the next three plays, leading to a quick change of possession and the ball going back to the Giants.

Even that couldn't happen without another near-turnover from Hurts, who didn't protect the football while running sideways and looking for an option downfield. As much credit as he has received for rallying after poor starts and making up for mistakes, Hurts is still having the poor starts, which can't be erased from the record. If he was playing better to open games, they wouldn't be laboring to beat bad teams late.

• All of the above being said about the game plan and strategic choices, an NFL team should not have to live and die by the success of the run game in 2021. Even for the fans who lean pro-Hurts, it says something about the expectations for the quarterback that dropping back to pass is often viewed as a waste of a play. To reiterate something we've written a lot this year, if a rival team's fanbase was actively upset about not running the ball, Philadelphia would relentlessly mock that team for having a quarterback they don't trust enough to run a modern NFL attack. Their third possession of the game featured runs on first and second down, leaving them in need of seven yards for a first when Hurts dropped back to pass on third down. Hurts had a good amount of time in the pocket to make something happen, but he would be brought down for a sack at the end of the play, killing the drive right then and there.

Every team knows the Eagles want to run, and they have been dominant enough in the trenches to get past that fact most weeks. But eventually, they're going to have to beat a team that's actually good, or their season is going to end as a result of their reliance on the ground game. If the end game for the Eagles is, "Rush for 200 yards or lose trying," that's a pretty crappy spot for the team to be in. There were opportunities on the table that Hurts just never saw in the first half, including a red-zone possession late in the half where Dallas Goedert was absolutely wide open in the corner of the endzone, Hurts never looking his way. It doesn't get much easier than this:

Just to reiterate how bad this was:

Dallas Goedert open in the corner of the end zone on that 3rd-and-goal play. pic.twitter.com/BY3Pg9SW8R

Freshly minted as a Pro Bowl alternate and in possession of some Eagles records on the ground, Hurts and his supporters now have accolades to point to as they make their case for a long-term view with him. But there are only so many games where he can come out looking terrible, so many times the fanbase can get mad the Eagles would dare to throw the football before a lot of people are going to come to the realization that this process is a giant indictment of Hurts and the passing game, rather than an endorsement of the run game. An NFL team should be able to do both things well.

• For as much blame as Hurts will take after that half, he wasn't exactly bailed out by his skill position guys, who put drop after drop on the turf in the opening 30 minutes of football.  Goedert followed up a mistake-laden week with a drop on his first target this Sunday, Sanders missed one on a swing pass, and Jalen Reagor had a golden opportunity to catch a screen and go against a Giants blitz, only for the second-year wideout to flub it.

There were even more than those previously listed, but the bottom line is that there are no real excuses for any of their miscues. Help out your quarterback and maybe he'll get into a rhythm.

• Jake Elliott has arguably been the most consistent player on the Eagles' roster this year, so it felt fitting for this terrible half of football that he pushed one wide right with a chance to tie the game. The Eagles have yet to play a good half against the Giants this year, and a missed kick was the cherry on top of another stinker.

• I have been one of the harshest critics of Jalen Reagor in the media this season, and even I'm starting to feel a bit bad for him. Booing him when he runs backward and gets tackled for a loss on a punt return is completely reasonable, but preemptively booing the guy before the ball is even snapped feels a bit pointless. I'm not here to police anybody's passion, but at least let the guy screw up before letting him have it. Boo him like you did when he dropped the screen pass that was perfectly set up for him. It's not like you're short on opportunities to boo this dude.

• A dumb Derek Barnett penalty in the first half, so scratch that off of your weekly Eagles bingo card/do a shot of your choice in your Eagles-themed drinking game.

(To be fair to Barnett, he was probably one of their better performers in the first half. But he remains an easy target for the silly penalties.)

• Javon Hargrave getting called for defensive holding on a run play is pretty impressive, honestly. I'm not even sure how that happens.

• I honestly find it hard to believe that people actually pay money to go see this team play (and in fairness, feel the same way about this year's Sixers). They are painful to watch on top of not being all that good at football, which is a brutal combo. Could it possibly get worse in the second half?

Hold on, getting something fed to me in my earpiece...

Yeah, it can definitely get worse.