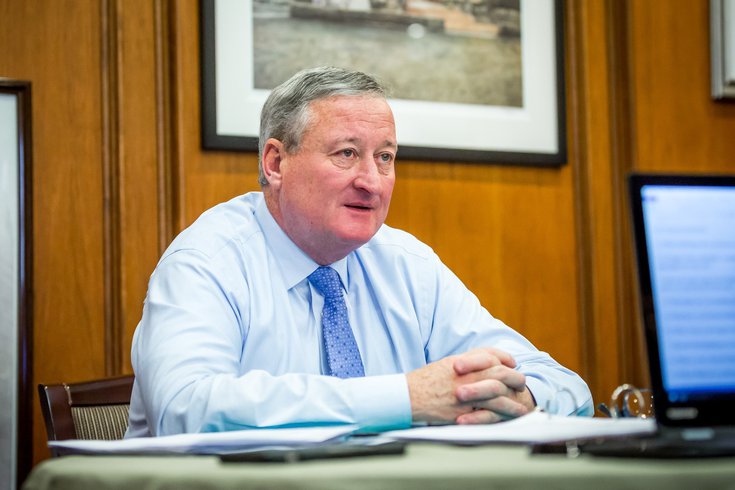 The first person in a nursing home has tested positive for coronavirus, city officials announced Saturday in a press briefing. The person is an employee in a Philadelphia nursing. Mayor Jim Kenney and Health Commissioner Tom Farley also announced the end to construction sites, and a need for coronavirus testing and protective gear.

City officials discussed coronavirus in a Philadelphia nursing home, an end to all construction, and medical equipment shortages in a press briefing Saturday.

Here's a round-up on how the City addressed these new and on-going issues of the public health crisis.

An employee of a nursing home has tested positive for coronavirus, city officials announced. It is the first case of infection in a city nursing home.

Philly Health Commissioner Tom Farley spoke, and said the city was "familiar with that type of situation," addressing the high risk of disease spread elderly residents living in close quarters.

Farley said they would be going to sanitize the nursing home where that person was employed later today. However, the new case will make visitor measures in environments like that even more strict. "We are going to be firmer about this then we have in the past," said Farley. "No visitors to nursing homes, no visitors to hospitals."

Philly Mayor Jim Kenney spoke, criticizing the federal government's response to the public health crisis, taking a somewhat more aggressive stance than he has taken in the past.

"The response of the federal government has been deficient," said Kenney. "And that's why the states and cities have stepped up."Construction

Additionally, non-essential construction will be stopped, the officials announced in the briefing. All construction sites must halt work and be secured by March 29.

Waivers will be availible for essential work, such as the construction of hospitals, routine maintenance, and emergency repair systems.

On testing, Farley said restated the ongoing lack of coronavirus tests nation-wide, and the resulting restrictions Philly has placed on who has priority to be tested.

New testing sites have opened up across Philadelphia and in surrounding areas, and city officials announced that more will open in the coming weeks. Despite a test shortage, the new locations are said to open, but prioritize elderly people who are experiencing symptoms, and healthcare workers.

The South Philly drive-thru site is availible to those without health insurance. At the same site Friday, 91 people were tested, and 50 of them were healthcare workers.

Officials announced that certain testing sites will open outside Rite Aid stores, but they didn't say when.

In addition to a testing shortage, officials addressed the issue of a medical equipment shortage, particularly of things like face masks.

Farley called for donations of masks and other gear from businesses to protect healthcare workers and others coming into contact with infected people.

Along with masks, and the amount of hospital beds is predicted to be insufficient to house the number of people predicted to become sick. Farley specified that just because you are sick, it doesn't mean you should go to the ER.

"If you have difficulty breathing," said Farley in the briefing, "That's when its time to go to the emergency department."