Five for Friday: Adam Ray of 'Getting On' 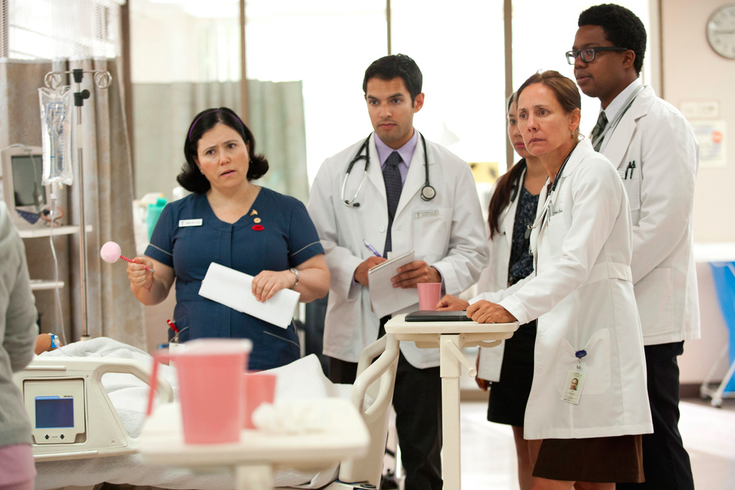 Adam Ray, center, plays an intern in the geriatrics ward in the HBO series "Getting On."

Meet Adam Ray, a Phoenixville, Pennsylvania, native and Temple University alumnus who stars in the critically acclaimed HBO comedy "Getting On," currently airing in its third (and reportedly final) season.

Ray plays one of a gaggle of geriatrics interns who function as a reality check for the unethical Dr. Jenna James (Laurie Metcalf, "Roseanne"), and comedic relief for the support staff at the fictional Mt. Palms Hospital. He's also just wrapped up filming a movie with "Scorpion" star Emma Fassler and hopes to continue with "Getting On" if its critical buzz saves it from cancelation, as has happened with previous HBO shows.

Below, Ray discusses what it's like to work with Metcalf, what's so funny about a geriatrics ward and the spontaneous decision to leave Philadelphia that got him on the show in the first place.

What made you want to be an actor? Was there a ‘light-bulb moment’?

I was taking electives in acting initially during college. After taking a more advanced class with Cheryl Williams at Temple, she encouraged me to pursue acting. I had a conversation where I told her that I might want to pursue this and she looked at me with so much warmth, and said, "You want to become an actor?"

During that class, I began to think that I could do this. I loved the feeling of connecting with the characters that we were given. It felt transcendent and I was hooked. I finished my senior year to say I did it and then left on a plane to Los Angeles. I was initially just going to visit for a week and then return home, but I couldn't do it. I thought, "I'm here now and I should stay and see what's possible." The first year was rough: I was living in a hostel in Hollywood for a while, and I moved three times in one year. I spent a lot of time just trying to get agents to take me seriously. It makes you evaluate how badly you really want it -- I just love this and I can't imagine my life without it. 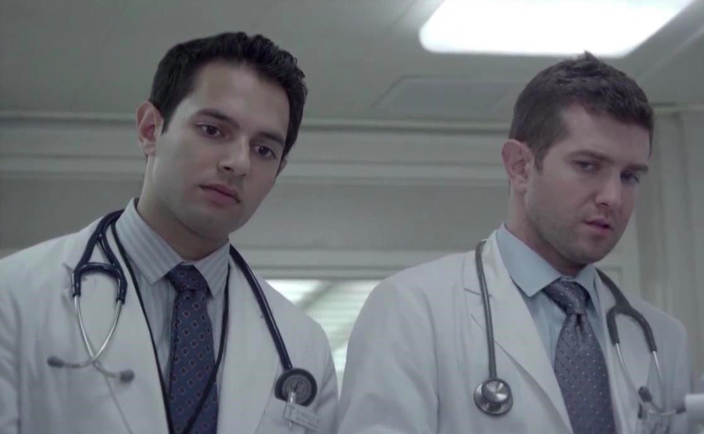 What do you think is inherently funny about life in a geriatrics ward? I’ve always speculated that part of why the show has trouble catching on is it’s difficult to explain why a show about ill old people and their doctors is actually hilarious, and not just morbid.

This isn't a show that has immediate appeal to everyone when they see their first commercial or billboard. HBO shows are very rich and aren't always what people are used to seeing. It's a show that looks death in the face and doesn't let the viewer get away with glossing it over. "Getting On" challenges you. It makes you look at what it means to lose someone you love and the impersonal nature of the healthcare system at large. I remember when I first saw the final cuts of seasons one and two. I'm not in every scene, so there's a lot that is new to me on some level. Seeing the show in its completion made me think about the loss of my grandmother and how it affected me. You feel for these characters who are trying their best to cope, but it's heart-wrenching. Then, we're taken on a ride through acceptance and finding humor in the tragedy.

It's really beautiful and I think that's why the people who have tuned in relate to it. We find the humor in the absurdity of this geriatric ward and the way doctors can be incentivized. They may do things in their best interest without their patients at the top of mind. It's a heightened reality, in some ways, but it speaks to the inefficiencies of healthcare in the United States.

In the show, all of Dr. James' (Laurie Metcalfe's) interns are fairly quiet. Why do you think that is? If your character could speak his mind, what do you think he’d be saying?

In the original BBC series, the interns have a lot of reaction shots to the madness that is going on around them. With respect to that formula, I think we were often there to serve the same function. There is so much absurdity that's going on. As interns and then residents, we wanted to stay in good standing with Dr.Jenna James so we tolerated most of the B.S. We grin and bear it.

As far as my character goes, I'm trying to do the best job possible, but it gets to a point where he wants to be like "WTF?!" But he buries it in order to keep his job. When the doctor asks questions, he wants to contribute, but he's written off after she isn't interested in hearing his opinion. I would be saying, "Why don't you let me add something here? I know the answers -- at least I think I know the answers." If we have a season four and they decide to write my character in, I would love to see him have that moment where he loses it. First, he might ask Dr.Jenna James for a sit-down. That probably wouldn't breed results, so he'd resort to letting it all out -- a breakdown where you see what's been going on under the surface for so long.

What’s it like to work with Laurie Metcalf on set? Is it hard to not think of her as Jackie from "Roseanne"?

Working with Laurie Metcalf on set has taught me an immense amount about acting. She's so truthful and dedicated. Her comedic timing is a thrill to watch. It inspired me a lot throughout shooting, and it made me better. While Jackie was an iconic role for her, it wasn't something I was thinking about on set. We're all there to be focused on what's presently going on. You have to be constantly aware and ready to adapt because of last-minute changes.

The third season is slated as the show’s last, but do you think it has any hope of survival? Would you stay on?

Everyone involved in "Getting On" is so passionate about this show. It means something for all of us. It's changed my career and my life. The writing is incredible and the acting is top-notch. There's a reason Niecy Nash was nominated for an Emmy for her work in this series. We've been so under-the-radar for the first season, and season two had a bigger marketing push and more people began talking about it.

The great thing is that the critics love it. Our reviews are so supportive of what we were trying to communicate. As a viewer, you can be crying one moment, and then you're hysterically laughing the next. [Creators] Mark V. Olsen and Will Scheffer are brilliant -- their writing is so unique, and they are two of the kindest people I've met in show business. With that said, I do think this show has hope for survival. There's been a lot of talk on social media about Netflix possibly picking it up. It's all speculation at this point, but that would be incredible to see happen. I think this show is so relatable and its audience just keeps on growing.

If it gets renewed for a fourth season, I would come to set in a heartbeat.