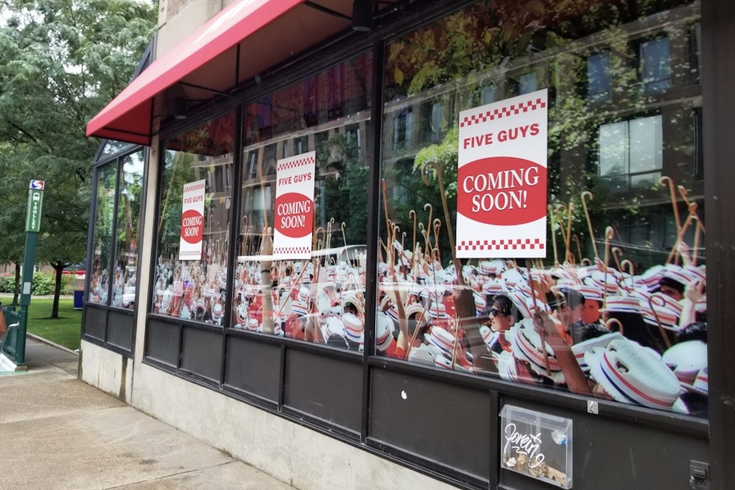 Five Guys' fourth location in Philadelphia will open at 3714 Spruce St. in University City in Fall 2020, the University of Pennsylvania announced.

Burger and shake chain Five Guys will open a fourth Philadelphia location later this year with the debut of a new restaurant on the campus of the University of Pennsylvania.

The popular burger joint is slated to open late fall at 3714 Spruce St., where it will attempt to fill the massive shoes of Beijing Restaurant. The beloved Chinese restaurant closed last September after 32 years at the location.

"We are so excited to open a Five Guys on Spruce Street on the University of Pennsylvania campus," said Molly Catalano, chief marketing officer for Five Guys. "We look forward to serving our burgers, fries and shakes to students, faculty, staff and neighbors."

Penn's Division of Real Estate Services and Facilities said the restaurant adds to the Shop Penn district between 30th and 40th streets and across Spruce, Walnut and Chestnut streets.

"Penn is always looking to add popular retail offerings to the district and enhance our eclectic mix of local and national dining options around campus," said Ed Datz, Penn’s executive director of real estate. "Five Guys is a brand recognized for delivering on their fresh food experience and customized menu. We are excited that they have chosen our University City neighborhood to open up their next restaurant."

Five Guys is known as a step up from most fast-food and fast-casual burger chains, offering more than 250,000 custom combinations and 1,000 shake variations, in addition to its fresh cut fries cooked in peanut oil. Launched in 1986 by Jerry and Janie Murrell and their five sons, the company has grown to more than 1,700 restaurants around the world.

An exact date for the opening of the Five Guys in University City has not yet been determined.