Five matchups to watch today between the Eagles and Jets 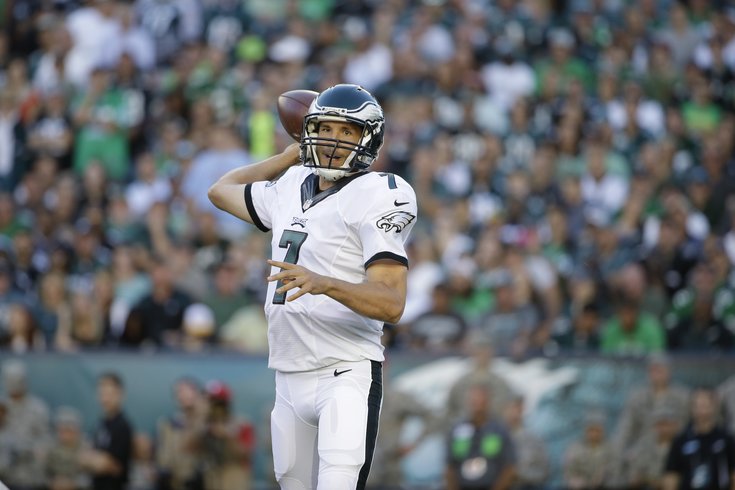 Sam Bradford is expected to return to action against the Patriots

The Eagles are 0-2, and are reeling after season-opening losses to the Falcons and Cowboys. As they try to rid themselves of the stench they produced last week against the Dallas, the Eagles have their fair share of corrections to make against a very talented Jets defense. Here are five matchups to watch.

1) The Eagles' sloppiness vs. the Jets' ball-hawking defense

A season ago, the Eagles won the "Triple Crown of Terrible Ball Security," when they led the NFL in INTs thrown, fumbles lost, and total turnovers:

So far in 2015, the Eagles already have five giveaways, which puts them on pace for 40 on the season. The Eagles have yet to correct their sloppy play on offense that plagued their season a year ago. Only two teams who have only played two games so far (the Chargers and Colts) have more giveaways than the Eagles.

Meanwhile, the Jets have forced an absurd 10 turnovers in their first two games, and are +8 in turnover differential on the season. Obviously, that is a huge reason they are 2-0. Forcing five turnovers per game is totally unsustainable, but if there's a team that can help them keep up that pace, it's the Eagles.

Now, you can cite the turnover battle as a "key" to any football game ever, but in this case you have an extreme example of a team that gives away the football like Smarties on Halloween, and another team that thieves opposing defenses like Joseph Randle in an underwear store.

As we saw last week, the Eagles' offensive line was manhandled by the Cowboys in the run game.

The Jets have an enormously talented trio of defensive linemen in Muhammad Wilkerson, Damon Harrison, and the #6 overall pick in the 2015 draft, Leonard Williams.

So far on the season, the Jets are allowing 3.8 yards per carry, and they have not yet allowed a rush of over 20 yards or a rushing TD. As a defense, they have also forced four fumbles.

If the Eagles continue to be completely ineffective running the football, the Jets can play with two deep safeties, and Sam Bradford will likely continue his ineffectiveness throwing the ball down the field.

3) The Eagles' ILBs vs. the Jets' short passing attack

The Eagles will be without their two highly athletic ILBs, Mychal Kendricks and Kiko Alonso. In their absence, DeMeco Ryans and rookie Jordan Hicks will play in their place. Ryans has looked woeful in pass coverage the first two weeks, and while Hicks showed encouraging signs against the Cowboys in his first extended action as a pro, the Jets will be the first team with the opportunity to game plan specifically against him.

Ryan Fitzpatrick is obviously not Aaron Rodgers by any stretch, but he is deadly in the 1-10 yard area of the field. Here are Fitzpatrick's numbers when attempting passes 1-10 yards past the line of scrimmage:

That of course will be the area of the field patrolled by Ryans and Hicks.

4) The Eagles' pass rush vs. the Jets' dinged-up offensive line

Three Jets starters along their offensive line -- LG James Carpenter, RG Willie Colon, and RT Breno Giacomini -- appear on the Jets' injury report. If there were ever a time that the Eagles need their pass rush to step up and wreck a game, it's in this must-win game against the Jets.

The Jets have allowed one sack so far this season. As a defense, the Eagles only have four sacks, despite being on the field for 140 snaps this season. Not only do Brandon Graham and Vinny Curry not yet have any sacks this season, neither have even put much pressure on the quarterback. That needs to change this week.

5) The Eagles vs. themselves

It's really pretty simple -- The Eagles can't catch, they can't throw, and they can't block. As a result, they've put themselves in a ton of 3rd and long situations, and are converting 3rd downs at a 22% clip, which is second worst in the NFL.