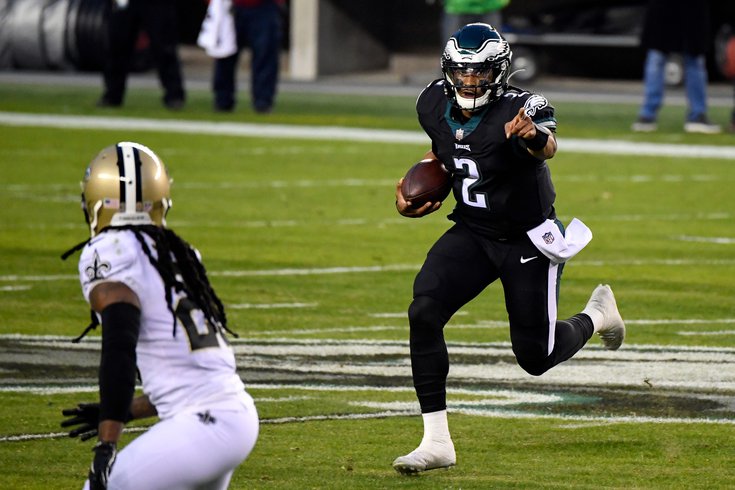 Jalen Hurts has had some experience against the Saints in his short NFL career,

If the Eagles can beat the Saints at home Sunday afternoon, they'll be an undeniable playoff contender and will likely remain one game (perhaps less) out of the final wild card spot in the NFC, with a bevy of easy games against crappy opponents to come.

If they falter, they will still be alive in the hunt, due to their schedule but will have an uphill battle after losing a key tiebreaker to a team they are chasing in New Orleans.

Either outcome will create quite an interesting environment in a city that can turn on a dime when it comes to expectations and mood for its beloved Eagles.

As we prepare for kickoff of the most important game at the Linc this season (a location that has seen Philly go winless so far), we've thrown together some over/unders that we think will help determine the winner Sunday. We've already taken a look at some matchups to watch, broken down the injuries on both sides and offered up our own predictions — as well as rounded up some others' picks — ahead of Sunday's Eagles vs. Saints matchup. Now, as we do each week, let's run through some numbers to keep an eye on in the form of our five over/unders...

The Eagles have sneakily inched up to 11th in the NFL in points per game, riding a three-game wave of scoring 32.7 points per contest, the second highest in the league over that span. And yet, the current total at several sports books is just 42 points — likely due to the Saints having a pretty good defense this season allowing under 20 points per game.

As our Jimmy Kempski outlined, there are a bunch of key players on the Saints who will be out for this one, including Alvin Kamara, and that's certainly a factor. Still, for the game to hit the 42-point under we are looking at a 21-20 final score and the Eagles have exceeded the over in three of their last four games. It won't be a shootout, but there will be more than 42 points scored

It's interesting that Hurts' best games have come as he's passed the ball for fewer and fewer yards. But a run-first attack has been the Eagles' bread and butter of late and, aside from using his legs to great effect, Hurts has simply acted as a game manager who can keep the defense honest by slinging the ball a few times when necessary.

The sophomore signal-caller hasn't exceeded 200 passing yards since the team's Week 7 loss to the Raiders, and just that one time since Week 4 against the Chiefs. Some of that has been due to matchups and the flow of the game. The Birds had a monster lead against the Lions a few weeks ago, so of course they didn't pass much in the second half. The same could be said for last week.

The Saints have one of the best rushing defenses in all of football, however, and it will be very interesting to see if Nick Sirianni sticks with the run game or if he tries to amend his attack based on his opponent's strengths and weaknesses. We are not predicting Hurts goes hog wild and throws for 350 yards on Sunday, but exceeding 200 does sound like a reasonable expectation — particularly with DeVonta Smith's recent stellar play.

The Eagles' last three games have seen them run the ball for 236, 176 and 216 yards, respectively. As we just mentioned, the Saints' run defense is very stout and if the Eagles' streak of 150+ yards was going to end, it would likely be in this game.

Miles Sanders is back on the practice field but his status for Week 11 is up in the air. Jordan Howard figures to be a factor as a downhill runner for short-yardage and goal line situations regardless, but the expectation is that Sanders would take most of the production away from Boston Scott should he return. Regardless of the personnel, it will be a tough test for Philly's ground game and one that will really inform us as to just how good this rush attack is. They may still establish the run and be a big factor but we're thinking they fall just short of 150.

Two of the most careful offenses in football will be doing battle in this one, as the Eagles average just 0.8 giveaways per game, and the Saints average 0.9, both good for top four in the NFL. These teams have combined to turn it over just 16 total times in 21 games and both are more or less average when it comes to creating turnovers on defense — the Eagles having done it nine times and the Saints 13 times, the 25th and 11th most in the NFL respectively.

Philly's lone takeaway last week was a consequential one, the fumble that Darius Slay returned for a touchdown in Denver. Will they be able to get another big one at home this week? And will they continue the trend of taking care of the football? We're predicting a clean game in some nice weather in this one.

We wrote about this in this same space a week ago, how up until Week 10 the Eagles had out-possessed their opponents just twice this season — hanging the defense out to dry and giving the offense less opportunity to score. It has hurt them in the past, but it's trending in the right direction.

The Birds dominated the ball in Denver but their previous struggles in TOP were so bad, they only jumped two spots and are currently 29th in the category in the NFL at 27:54. The Eagles' time of possession thus far this season has been as follows:

Three of their four wins have come when they have had the ball longer than their opponents. If they can control things against New Orleans and establish the run against a very good run defense, chances are they'll get the win.